A Conversation with writer and poet Tyler Gillespie

When Florida Man, a viral meme poking fun at Sunshine State residents arrested for outlandish crimes, became a national punchline several years ago, this immediately piqued the interest of writer Tyler Gillespie. It was rich, complex material and he knew right away he wanted to explore “the phenomena” in his work. The result is his book of nonfiction poetry, Florida Man: Poems, which was released in June by Red Flag Press.

The Largo native, studying nonfiction writing and journalism in the University of New Orleans’ MFA program when #FloridaMan first surged in popularity on Twitter and other social media outlets, felt a kinship with the individuals portrayed in these news stories. After all, Gillespie grew up here. He was surrounded by these people. Florida Man could have been any of his friends and family. At a point, it might have even been him, he said. So, he knew that there was more to each story than the sensational headlines conveyed.

“In a kind of way, I knew people that were going through these things, whether they were my own family or my own friends of the family,” he said.

Gillespie is also open about his own brush with the law. As a teenager, he was arrested for a DUI.

“In a mall parking lot. Actually, WestShore (Plaza),” he said. “I was coming home from this club called Chambers. I’d been going since I was 16, 17. I had a fake ID at the time. But it didn’t really matter too much. So, yeah, I’ve been arrested and could have been a Florida Man.”

This was before public records were digitized and made more accessible to the media and general public, though. Unlike many of those lambasted in Florida Man posts and articles, Gillespie knows he was lucky to have control of his own narrative, and to avoid the public backlash and embarrassment that others have experienced in recent years.

“Being able to talk about your own story in your own sort of way is so important. I have that opportunity, but not everyone does,” he said.

Florida Man: Poems includes a piece about his drunk driving arrest and what led up to it, including his attending a Southern Baptist school as a gay teen.

“There was a lot of context in my situation,” he said. “I was dealing with substance abuse issues I didn’t even know about until later, dealing with going to hell, dealing with navigating gay life when you’re a young queer person in dive bars in Tampa with a lot of drugs.”

Initially, the book was meant to be an essay collection. At the time he was writing for Vice, often covering Florida stories, mostly environmental reporting touching on eco-tourism and roadside attractions.

After interviewing an alligator wrestler, he realized the material was more poetic than he initially thought.

“I heard this alligator wrestler tell me this story, and it’s very contained, but I heard it as a poem,” he said. “Instead of trying to fit it into this long essay, I made it its own thing as a poem. The poetry allows a little bit more, I think, association. I can ask some questions without having to have answers. So, I had a lot of answers, but I had a lot more questions. That’s how they were working together. Poems have their own answers, but not in the linear reportage or essay form.”

“Poems have their own answers, but not in the linear reportage or essay form.”

From there, he set out to interview as many individuals featured in Florida Man news stories as he could. Most, however, were cautious about sharing their stories with him.

“Not a lot of people wanted to talk to me,” Gillespie said. “They had a lot of distrust with media, especially after being made a joke in the news.” 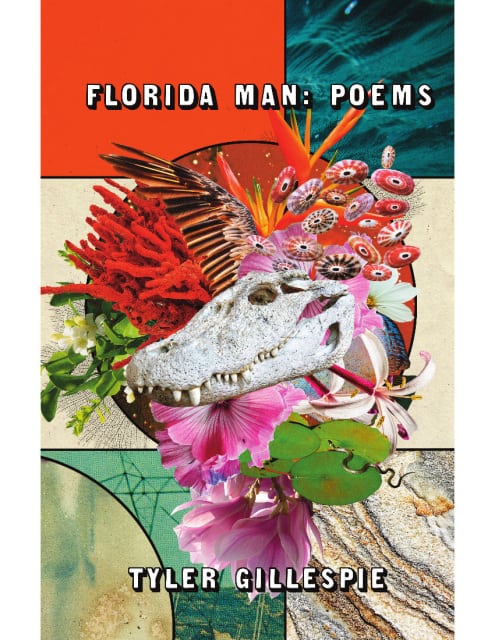 ne of his friends “got the ball rolling” by connecting him with one such individual, Rachel Hayes. The title of the 10-page poem based on his interview with her mirrors the headlines that followed her arrest: “Florida Woman Repeatedly Slapped Grandma for Rejecting Facebook Friend Request.”

He said, “Her case was closed … so we could kind of talk about things in a different way.”

He found more depth to her story than the police report and headlines told. At its heart was a complicated relationship between a granddaughter and grandmother, and an allegedly exaggerated version of an incident following a dysfunctional family dinner.

Gillespie also noted the similarities between him and Hayes, reflecting in the poem about what could have been his own fate.

“She’s from Pinellas County, as well, and she worked on Clearwater Beach,” he said. “We didn’t know each other, but we’re similar ages and had a similar upbringing in a kind of way.”

He’s already moved on to several new projects, including a book of essays “in the same vein,” though he plans to include more about environmental issues and nature. Recently, he interviewed a reformed pet smuggler in South Florida who runs a reptile farm.

He’s also working on a second book of poetry about climate change and relationships. Gillespie, who recently graduated from the University of South Florida St. Petersburg’s journalism masters’ program, also teaches at St. Petersburg College and USF’s Tampa campus, and is a contributing writer for Playboy.

Aug. 18-19 – Instructor at Camp Wordier Than Thou at Lake Seminole Park

Nov. 5 – Reading at the University of South Florida St. Petersburg