Airports around the globe are trending towards supporting the arts more than ever before. Not only are many airports funding public art initiatives and purchasing pieces for permanent collections, they’re also embracing the arts in other ways, such as showcasing regional artists in rotating galleries, and hosting concerts and other performances.

Tampa Bay area airports have long embraced public art, though. Both Tampa International Airport (TPA) and St. Pete-Clearwater International Airport (PIE) have had art on display for decades and boast significant collections. TPA’s first piece of public art, a collection of seabird sculptures by Roy Butler, was installed in the main terminal in 1971. 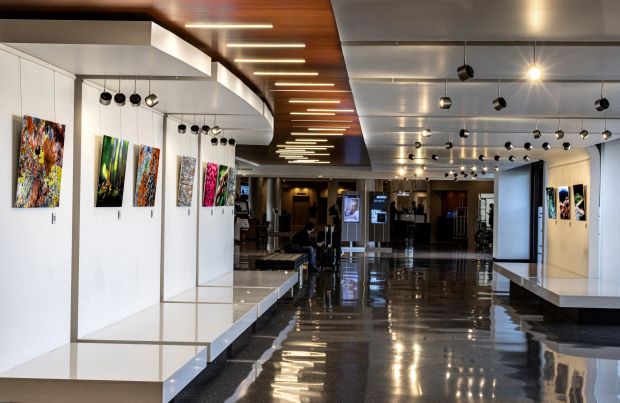 “We’re all getting together and talking about bringing in the arts, that’s for sure. You see it at conferences. It’s being talked about by airport planners everywhere,” says Kelly Figley, airport marketing manager at TPA. “(Art is) really necessary to enhance the travel experience and showcase what your city is all about.”

Michele Routh, PIE’s public information director, adds, “Everyone wants to have a sense of place. Art is a huge part of that.”

PIE uses art by Florida artists – many from the Tampa Bay area including selections from the Pinellas County Public Art Collection – to showcase what the region is all about, she says. “We’re trying to do kind of a destination theme here. Your Florida vacation starts when you’re here in our airport.”

In recent years, both TPA and PIE have reaffirmed their dedication to the arts. Both have ongoing expansions and renovation projects where art continues to play a large role.

Art is a big part of TPA’s ongoing $2 billion expansion, which will allow the growing airport to accommodate up to 34 million passengers each year. The first phase of this project, which was completed in 2018, saw the airport acquire works by a number of international artists, including Esterio Segura, Daniel Canogar, Erwin Redl, Nick Cave and Bob Faust, Elisabeth Condon, Tim Prentice & David Colbert, Sheryl Oring and Ralph Helmick.

Phase 2 of the project, which is currently underway, includes the addition of nine new public art works. A public call for artists closed in July and the airport’s art committee is reviewing all art proposals submitted.

For this phase, the airport will invest $3.1 million in art, Figley says. TPA has also updated its public art policy recently. Moving forward, up to 2 percent of capital projects will be used to fund public-facing art.

The airport embraces the arts in other ways, too. The rotating Airport Gallery features a different artist, often with ties to Florida, every six months or so. The photography of award-winning documentary artist and National Geographic Explorer Matthew Cicanese, who currently lives in Washington, D.C. but is from Pasco County, will be on display in this gallery until February.

The airport has also allowed visual artists to set up pop-up exhibits and even art demonstrations throughout its facilities. Figley welcomes pitches from regional artists and enjoys collaborating with local talent. “You’d be surprised what we might say yes to. You’ll find that we’re a really open bunch,” she says. She can be contacted at kfigley@tampaairport.com.

Likewise, PIE has intentionally featured art into its recent expansion and terminal renovations, Routh says. Artistic architectural features, such as mosaic tile displays by the Morean Art Center instructor and artist Elle Leonard, were incorporated into the 12,000-square-foot terminal renovation that opened last November. Including artistic elements during interior design planning makes it easier to put art on display in the airport, as it’s less “cumbersome” than the public art process, she adds.

During its substantial 2010 terminal renovation project, in addition to updating the plumbing, HVAC system and other infrastructure, PIE also received a fresh, updated look. “Our terminal was built in 12 to 13 phases over 50-plus years and that’s what it looked like,” Routh explains. “We wanted to make the terminal more seamless, more modern, more friendly. Art played a big part in this.”

The updated terminal included artistic architectural elements, from mosaic murals and to designs on walkway floors. At this time, they also put out an international call for artists to design a wall separating the airport’s main entry way and the TSA screening area. PIE received responses from 45 artists, ultimately choosing Kentucky glass artist Guy Kemper, who created a 45-by-5 feet blown and painted glass art wall for the airport.

Space is “a challenge” at PIE, which has seen significant growth in recent years. In her 15 years working for the airport, Routh has seen the number of travelers it accommodates each year jump from 1.3 million to 2.3 million. “We are bursting at the seams in terms of space.”

Still, supporting the arts remains imperative to PIE. After completion of a construction project including new restaurants and a concession stand, Routh will consider bringing back a rotating gallery featuring student work. There’s also an opportunity for a regional artist to paint a mural near an outdoor ramp at Gate 12. “That’s something I’m looking to talk to a mural artist about,” she says. “We want something that creates a sense of place. Something that says, ‘Ok, you have arrived in Florida. Here is the sun, the sky, the sea, the beach.”

Once Mazzaro’s and 3 Daughters Brewing are completed in early 2020, she’ll also consider reviving a concert series at the airport. For a while, the airport worked with Elizabeth Baker to host quarterly musical performances. “What I hope is as our restaurants create new spaces, that maybe we can look at doing a small concert series again,” she says. “It’s challenging for us with space, but we’re always looking to incorporate art wherever we can.”

Artists interested in learning more about the upcoming mural project or other opportunities, should email Routh at mrouth@fly2pie.com.