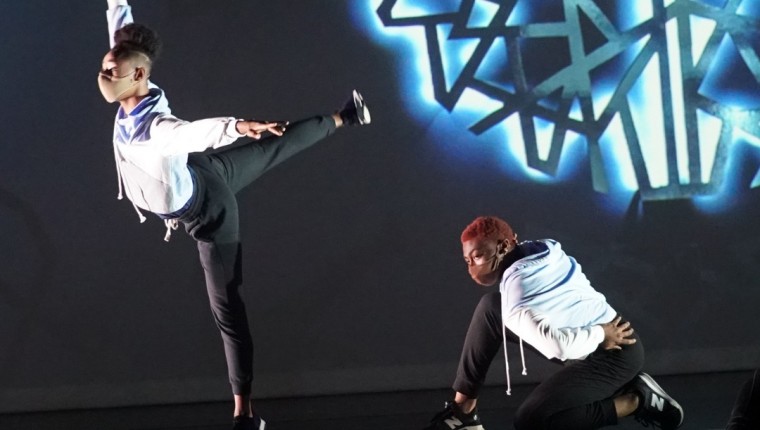 a look at creating of stardust and orchids

In February 2021 I started creating a new work with four dancers from the Dance Department at Hillsborough Community College. This creation would be my first time back in the studio with dancers and not working via zoom.  I had a list of ideas and themes I wanted to explore the main ones being distance and social isolation.

As luck would have it HCC’s Gallery221 was exhibiting dis•tance, an installation by Ya La’ ford, which connected with some of my initial thematic ideas.  Ya and I have collaborated on community projects and performances in the past, and I find her approach to structure, time, and space complimentary to how I like to shape dances.  After researching dis•tance and viewing the exhibit I reached out to Ya and asked if she would mind if I incorporated some of her work into my new piece. Ya graciously agreed.

The first two weeks of rehearsal took place in Gallery221. Ya was able to sit in on an early rehearsal and speak to us about her installation. I wanted the dancers and I to be immersed inside the visual art, and let our bodies respond to that immersion. Ya’s large scale works surrounded us as we danced creating a sense of being in another dimension of time and space. I asked the dancers to spend time viewing and make notes on their responses to dis•tance and then we began creating movement scores based on their responses and other prompts that I gave them. When  dis•tance closed in late February we moved our rehearsals into the dance studio.

Over the next month of stardust and orchids began to take shape. The dancers kept developing their improvisational movement scores as well as absorbing the movement phrases I was creating. I also played with mapping pathways that would reflect the structural elements I saw in Ya’s work.  The finished piece is a combination of improvisation and set choreography which hopefully gives voice to all the artists who participated in this creative process. It takes a village to create a new work and I am incredibly grateful to all the artists whose voices helped shape of stardust and orchids, especially the dancers, Reginald Allen, Keerah Baker, Helena Jones, and Deion Walker.

One of the elements that I wanted to recreate onstage was the feeling of being immersed in Ya’s work, of being in another dimension. To do this I chose two images from dis•tance to project onstage and worked with digital designer Sharon McCaman to create video projections. Lighting designer Celeste Silsby and I worked together to create lights that would transform the stage into this other dimension I envisioned. I also decided to stagger the heights of the wings to redefine the dance space and use a hazer to add atmosphere.

An excerpt of of stardust and orchids is being performed as part of HCC’s Dance Spring Concert. Performances are April 22-24 at 7:30pm and will be live-streamed from HCC’s Mainstage Theatre. Tickets can be purchased at www.hccfl.edu/dancetickets