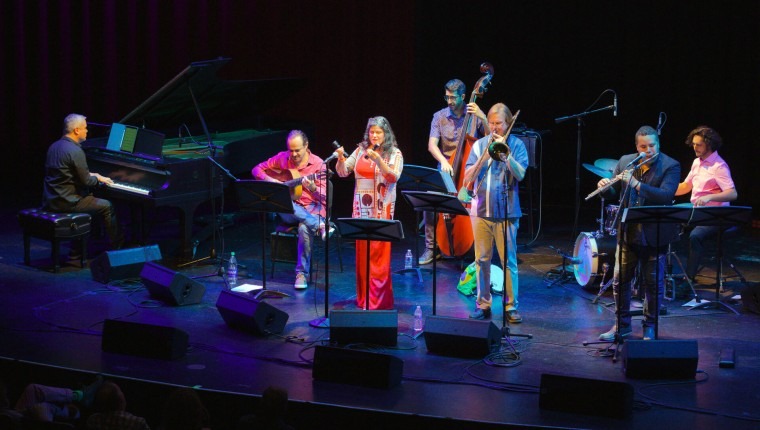 About 12 years ago my wife Andrea and I formed O Som Do Jazz (“the sound of jazz” in Portuguese), a music group exploring the intersection of jazz and Brazilian music.

Andrea grew up in Rio de Janeiro and her parents often had weekend parties that included sing-alongs with a family friend who played the piano very well. From this “karaoke” childhood, she memorized dozens and dozens of Bossa Nova tunes and later MPB (popular music of Brazil). She is a walking encyclopedia of Brazilian song lyrics which continues to amaze me.

Before that, I was composing and playing experimental music and jazz. My knowledge of Brazilian music was limited to a handful of Bossa Novas found in the jazz musician’s “dictionary” called the Real Book and some curious music that I heard on a David Byrne compilation of Brazilian music on CD titled Beleza Tropical.

We began our Brazilian music journey in O Som Do Jazz by learning the traditional Bossa Nova tunes like “The Girl from Ipanema,” “Corcovado” and “Barquinho” (My Little Boat). Soon, we were exploring the amazing songbook of Antônio Carlos Jobim, simply known as Tom Jobim, by Brazilians.  He wrote about 400 songs in a variety of styles influenced by Brazilian chorinho, samba, Samba-canção and U.S. jazz. His collaborations with Brazilian poet Vinícius de Moraes elevated Brazilian popular music to an international level.

Tom Jobim is just the tip of the iceberg of great Brazilian music and we began to learn and perform the music of Baden Powell, Luiz Bonfá, Gilberto Gil, João Donato, Djavan, Carlos Lyra, Roberto Menescal and many more. Today, our repertoire in O Som Do Jazz tops 100 songs and instrumental pieces. That study also inspired me to compose original music inspired by Brazilian genres. Some of that original music has been placed in TV shows including “Looking” on HBO and “Grandfathered” on Fox.

Our rhythm section has long included bassist Alejandro Arenas and drummer Mark Feinman. Both musicians are very comfortable with Brazilian style including “Suingue” or “Ginga,” a groove or swing that is difficult for U.S. musicians to feel. Our friend and brilliant pianist/composer Jovino Santos Neto explains Ginga here.

We have also been fortunate to work with several Brazilian pianists over the years including Regis Moreira, Adolfo Mendonca and currently Bruno Miranda. We frequently have guest Brazilian artists perform with us including Antonio Adolfo, Jovino Santos Neto, Francois de Lima, Tabajara Belo, Haroldo Mauro, as well as the brilliant young flutist/saxophonist/bassist José Valentino Ruiz.

You can explore our music at osomdojazz.com