Healing with Help from Nature and Art

In September 2015, 27-year-old Devon Grimmé flew to Hawaii for a friend’s destination wedding. His mother, Laura McCullough, got a call in Florida at 6 a.m. Devon had drowned.

McCullough has been an ER and Trauma nurse for over
40 years, a dedicated life saver who has experienced death countless times. “I never expected this
to happen to me,” she says.

She describes her son as someone who made friends wherever he went. He loved flying on commercial airlines because it was an opportunity to meet a lot of people
in a short period of time. After Devon died, McCullough received emails from all over the world. “They usually started out ‘you don’t know me but’ and followed with fantastic stories about Devon and how he helped them.

“I was flailing,” McCullough says. “I did anything and everything that I thought might help. The pain was so bad. You just have to follow the spiritual bread crumbs. You just keep being led until you find what works for you. I heard about this person and I heard about that group, that article. Even a yoga class. The instructor would say things like, ‘with this pose you’re healing, soothing your nervous system.’ Each experience gave me the strength to read another article or have lunch with a friend — the strength to keep going.”

Over a decade ago in Ōtsuchi, Japan, a garden designer named Itaru Sasaki lost a beloved cousin to cancer. In his grief, he added a phone booth to his garden so that he could “talk” to his cousin.

In 2011, 15,000 people were killed in the Tōhoku tsunami, including ten percent of the population of Ōtsuchi.

Without any formal maps, grieving friends and family members of the deceased made their way to Sasaki’s Phone of the Wind to feel connected to their loved ones.

Soon after, Sasaki opened his simple yet cathartic phone booth to the public. 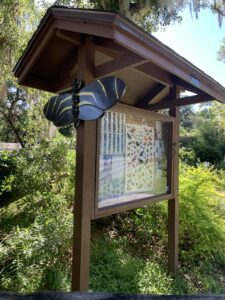 A Wind Phone in Safety Harbor

“Laura came to me with this idea,” says Gary Sawtelle, president of the Safety Harbor Garden Club. “She almost made me cry.”

Most weekdays, Sawtelle can be found at Folly Farm, a nature preserve and park just off of McMullen Booth Road in Safety Harbor. He tends the gardens there, teaches community members to care for and identify native plants, and works with other Garden Club volunteers to propagate and preserve.

Thanks in big part to the club and Sawtelle’s efforts, Folly Farm has become a Zen garden full of butterflies and flowers, oaks and art. The 31-year-old Garden Club has created a wind garden, a butterfly garden – and just recently, thanks to Laura McCullough, a Wind Phone.

“Originally, I had this vision,” Sawtelle says, “I was looking around town for an actual phone booth.”

Unable to locate an appropriate relic, he turned to Chris Dotson, who before retirement two years ago, was a finance man. Now, he is an artist and gardener.

“I asked Chris and he immediately started to build this thing,” Sawtelle says.

“Gary thought it was a beautiful idea,” McCullough says. “I didn’t know how to get the money for it. But the more Gary talked to people, the more support there was. He told me there was a guy who was building it. When I got to Chris’s house and saw what he was doing, I started crying. He told me he didn’t have a blueprint — it was just coming to him as he built it.”

Healing with help from nature and art

“There are so many things going on out here,” Sawtelle says, pointing to nearby sections of Folly Farm. “That’s a natural bowl, dipping into the ground. It’s a perfect situation for the rain garden. It’s really like a demonstration garden.” He bends forward, gently cupping a flower in his palm. “This is a pink native swamp milkweed.“

Sawtelle has spent about two years at Folly Farm, and Dotson a year.

“Transforming Folly Farm into this magical place that it is becoming, well, Chris came onboard and creative stuff started happening,” says Sawtelle. He points to wooden butterflies in different sizes and colors, some almost hidden under leaves and flowers. “If you go through the gardens now, you’ll see the spirit of the butterfly everywhere.”

“Gary asked me to come out but I said, what kind of garden club is this?” recalls Dotson. “I didn’t want to sit around and drink tea and talk.” He walks to his first piece, a zebra longwing.

“Then,” adds Sawtelle, turning to face a large wooden piece overlooking an area of the butterfly garden, “there’s this odd looking one that looks like a spirit.”

“I was experimenting,” Dotson says, “I do that a lot.”

His art is always wood. Natural animals, butterflies and a lot of sea life, fish, sharks, porpoises, turtles. He stands in front of the piece Sawtelle refers to. “It’s a freeform butterfly made out of broken pieces of wood,” he says.

Dotson continues walking and pointing out his art. He passes a tree stump that he turned into a whimsical home for tiny gnomes.

“Gary was talking to me about the Wind Phone concept. I spent a lot of hours working on it because it was fun,” he says. “The word is getting out. It seems to be serving its purpose. We’re very pleased with how well it turned out.”

The lattice-sided phone booth is out in the open, yet discreetly tucked away from the center of the preserve. A nod to the original Phone of the Wind in Japan, the Folly Farm structure is white and has a sort of pagoda-shaped roof, with a copper cap on top shaped like a pyramid, signifying opening and closing, beginnings and endings.

There’s a bench inside big enough for two and a message board full of chalked sentiments hanging on the wall. A lineless, vintage rotary phone is mounted across from the message board. Whoever is in the booth can sit, listen, and talk as they look out onto a corridor leading to the butterfly garden.

The city provided some of the supplies that Dotson used, and what they didn’t have, the Garden Club donated.

“The city sent a flatbed truck and eight guys,” explains Dotson. The wind phone booth “had been in my driveway in two pieces. I didn’t know how we were going to move it.”

“The city was great,” says Sawtelle. They tamped and prepared the site, then they brought in rocks.”

Since that original Wind Phone was built by a gardener in Japan, several have been created across the US. But it took two Florida gardeners and a grieving mother to make it happen in Florida.

When McCullough heard the city was moving it, she hurried to Folly Farm. “I wrote a note to my son on the dirt, below where the Wind Phone would go – that he still matters and he still makes things happen.”

McCullough has created a Wind Phone Safety Harbor Facebook group and she encourages visitors to post pictures and share stories (even about what they’re going through), to the page. 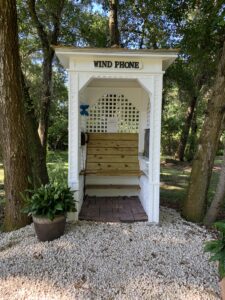 “We are all in this together,” she says. “We are all grieving something. We need a place to go to do that.”

After the Wind Phone was set in place, she was the first to make a call. And of course, she called Devon.

“Come to Folly Farm, pick up the phone,” she says,
“because the conversation continues.

. . .. . .
To read more about Laura McCullough and Devon Grimmé,
visit her website and blog at livelikedevon.com 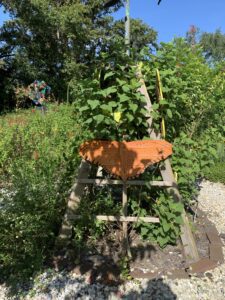