October 4, 2019 |Written by Tiffany Razzano-From an Interview by Marcea Cazel

More Opportunities
Than Ever for Artists in Clearwater 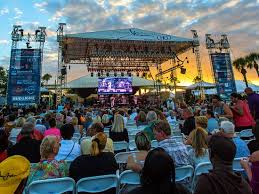 Beautiful beaches and water sports certainly come to mind when you picture Clearwater. After all, that’s how we position ourselves. And yet there is so much more to discover. The Clearwater Regional Chamber of Commerce’s vice president of tourism, Kristina Alspaw, shares how the city’s growing arts community engages out-of-town visitors and locals, alike.

Warm water, sandy beaches, family getaways are the familiar (and appreciated) images one might immediately conjure when they think of Clearwater, Florida. Without a doubt, Clearwater is home to some of the most beautiful beaches in the world, which draw thousands of tourists each year; yet the area has so much more to offer says Kristina Alspaw, vice president of the Clearwater Regional Chamber of Commerce.

“People come for the beaches,” she says. “We have the number one beach in the country, but there’s so much more here. We have a variety of ways to help connect visitors with these other experiences, including the arts.”

In recent years, Clearwater’s arts community has experienced significant growth with new opportunities for artists to share their work. The chamber, which represents more than 600 businesses in the area, works with artists and arts organizations to promote the region and engage both out-of-state tourists and regional visitors.

With so many tourists visiting the area, in addition to museums and galleries, atypical venues for artists to showcase their work are starting to pop up. Local hotels and restaurants are more likely than ever to hang paintings by area artists or schedule local bands to perform. Alspaw points to the success Tarpon Springs artist Christopher Still has had creating works specifically for the Opal Sands Resort.

There are also numerous largescale events throughout the year, such as the Clearwater Jazz Holiday and the Sugar Sand Festival. While these events book national and international artists, there is usually room for regional acts to get on the bill, and area artists who are interested in being a part of them should contact organizers. “It’s just a matter of reaching out,” Alspaw says.

During events like these, local businesses often create additional opportunities for artists. For instance, the Hyatt Regency Clearwater Beach Resort and Spa gets involved with “all things Sugar Sand,” she says, hiring many artists to create sand sculptures on its property at the time of the festival. Meanwhile, the Fenway Hotel in Dunedin usually hosts events around the Clearwater Jazz Holiday in October. During the summer, the boutique hotel also presents a jazz concert series.

Partnerships with businesses, venues and arts organizations, such as Creative Pinellas, the Clearwater Arts Alliance (CAA), and Ruth Eckerd Hall, are “integral” to the chamber’s work in the arts, Alspaw says.

In fact, the chamber recently consulted with the CAA on a project that mixes local businesses and the arts. The CAA created a cultural map of Clearwater that features all businesses and venues with an arts focus, and the chamber offered “guidance for the project.

The chamber’s relationship with city leadership and staff is just as vital its work in the arts. The chamber works closely with the city’s arts liaison, who has strived to increase the presence of the arts in the city through special events and public art. Public art is also slated to play a role in Imagine Clearwater, the city’s largescale waterfront redevelopment project.

The city’s Community Redevelopment Agency also focuses on the arts as a means of revitalizing downtown Clearwater. The CRA operates Second Century Studios, a downtown art space that has hosted both local artists and larger touring exhibits. Recently, it hosted Dreams of Dali, a pop-up virtual reality experience from the Dali Museum. Clearwater-based company KnowBe4 provided the technology for the exhibit.

The CRA has also set its focus on public art, with several new sculptures and murals popping up downtown within the past six months, Alspaw says. “You’re starting to see a greater presence of public art.”

Here is a link to some of the murals in Clearwater.

She adds, “We work with our partners wherever they need us. We tend to connect the for-profit, not-for-profit and government entities.”

The chamber has also created its own opportunity for area artists—the colorful Clearwater Dolphins Trail. The project connects local businesses with artists who are interested in customizing a dolphin using paint, glass, ceramic and other media to uniquely design a dolphin pod.

The program started when the Republican National Convention came to town in 2012. Initially, 12 dolphins were displayed at Pier 60 on Clearwater Beach. Since then, the number of dolphin sculptures has grown to more than 200, 160 of which are for public viewing. An interactive map for the Clearwater Dolphin Trail with information about both the artist and the business can be found on the chamber website.

When a business signs up to be part of the trail, they’re send a link to a portfolio of artists approved for the project, Alspaw says. Artists are paid anywhere from $500 to more than $2,000 per dolphin, she adds. “It’s based on the intricacy of the design.”

Artists interested in being considered for the Clearwater Dolphin Trail should email Alspaw.

Many local businesses, including the Fenway Hotel, 453 Edgewater Dr., Dunedin, host concerts around the annual Clearwater Jazz Holiday in October.