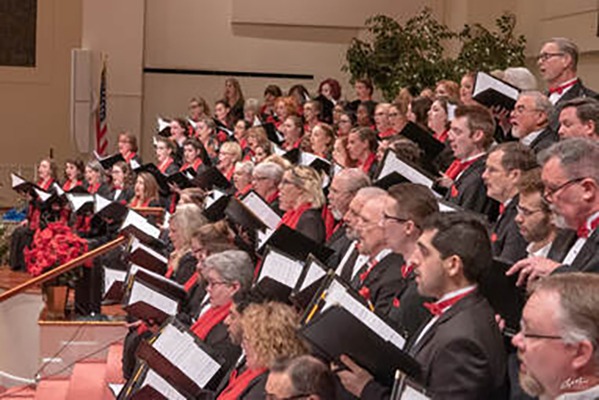 You can hear an audio version of this story here

. . .
. . .
The war in Ukraine, a lingering pandemic, and spikes in the cost of living can strain anyone, so we seek relief amid the chaos.

The right music provides it – sublime sounds that serve as a balm to soothe and nurture us. A pair of concerts aims to do precisely that, momentarily washing away our anxieties through the intimacy of the human voice.

Or more correctly, voices. The talented sopranos, altos, tenors and basses who make up the 100-member Master Chorale of Tampa Bay present one of their most serene programs of the season, anchored by Gabriel Fauré’s ethereal Requiem.
. . .

“In Paradisum,” from Fauré’s Requiem, performed in 1988
by La Chapelle Royale, conducted by Philippe Herreweghe

. . .
“It’s a really beautiful program, and it allows us to be more reflective,’’ says Brett Karlin, the choir’s artistic director. “And of course, the Fauré is an extraordinary piece of music.’’

Karlin designed the 75-minute concerts as an offering of relief from the concerns and troubles all around us, a reflection on sorrow, grief, perseverance and renewal. They also highlight the choir apart from the big productions it does with The Florida Orchestra, such as recent performances of Beethoven’s Ninth Symphony. In these two appearances at the start of April, the chorale will sing a cappella – with the exception of a single organ and piano.

“It certainly was a consciously chosen program,’’ Karlin says about the tranquil nature of the music. “And there’s no intermission.’’
. . .

. . .
It opens on an upbeat note with Hubert Parry’s I Was Glad When They Said Unto Me, a robust piece for organ and choir traditionally sung as an anthem for the coronation of new kings and queens of the British monarchy. It suggests a “turning of a page’’ as we move forward in life.

The program continues with Lacrimosa by the Lithuanian composer Mindaugas Urbaitis, who dedicated it to those who died defending his homeland during World War II. At less than three pages, the score is sparse and minimalistic.

“It’s a deconstruction of the Lacrimosa from Mozart’s Requiem,’’ adds Karlin. “He uses little elements from it, then a full quote. It’s all a cappella and I think it will be a very intimate and mysterious experience.’’

The choir then repeats a piece performed earlier this year with The Florida Orchestra, Jake Runestad’s A Silence Haunts Me, which is based on the Heiligenstadt Testament, Beethoven’s famous diary entry about the realization of his growing deafness.

Composed in 2019, the music unfolds as a dramatic choral monologue, using Beethoven’s own anguished words against echoes of the Moonlight Sonata, the Eroica Symphony, and the finale of the Ninth Symphony. The music is stark and piercing, and delivers its impact near the end, when Karlin continues to lead the choir in silence – symbolic of a composer who could no longer hear.
. . .

. . .
Then comes the world premiere of This, Too, Shall Pass, a new commission by the Haitian American composer, Sydney Guillaume. “It’s an acknowledgment of pain in difficult times,’’ Karlin adds, “and that the human spirit is indelible and we can move on.’’

The concerts end with a scaled-down version of Fauré’s magnificent Requiem. Unlike the operatic choral Masses of Berlioz and Verdi, Fauré focuses on acceptance and reflection, and had little use for declamatory flogging. Missing is the drama of the medieval Dies irae (Day of Wrath) – instead, Fauré gives us a treatise on peace, resignation and eternal rest. The Sanctus and Pie Jesu movements are among the best-loved pieces in the choral repertoire.

“They say that my Requiem does not express the terror of death,’’ Fauré once said. “Some have called it a lullaby of death. But that is how I see death: as a happy deliverance, as a yearning for the joy that lies beyond, rather than as a sorrowful passing.’’