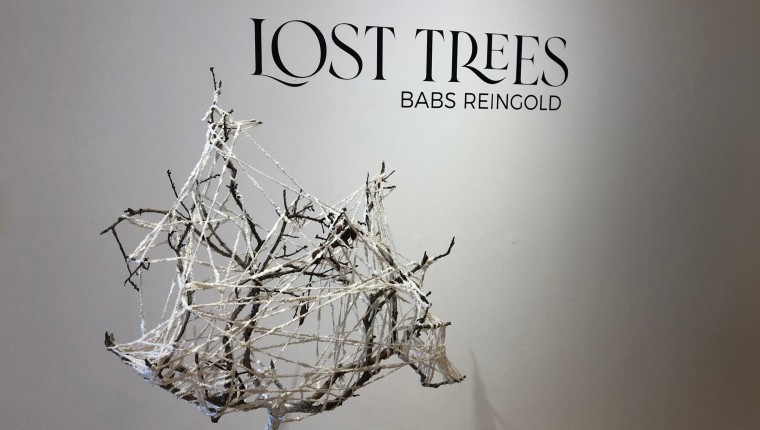 Recently I had opportunity to visit the Styx Tall Tree Reserve located within the Tasmanian Wilderness World Heritage Area. The Reserve, next to the Styx River, has some of the largest and tallest eucalyptus trees on the planet.
. . .

. . .
Walking among them, running my hands along their gnarly trunks, breathing in the forest scent, feeling the surrounding moist atmosphere, is being embraced by these ancient giants – all of which couldn’t be more of a stark contrast to the tracts of barren terrain adjacent the Wilderness World Heritage Site, barren due to commercial logging.
. . .

. . .
Together they are at Gallery 221@HCC on Hillsborough Community College’s Dale Mabry Campus, in an installation titled Lost Trees by visual artist Babs Reingold. It is an exhibition with subtleties and nuanced readings that each viewer will have to bring to see the complete picture.
. . . . . .
Some may recognize Reingold from her comprehensive solo and group exhibitions on many fronts – internationally, nationally and around this Tampa Bay region, where she is a consistent storyteller expressing her very personal life experiences, intersecting with concerns of our collective humanity, its exponential growth, and how that is impacting our surrounding natural environment – and ultimately, the quality of our own existence in survival or extinction.

Reingold’s first major piece on the impact of our human activities on the environment was her 2016-17 The Last Tree installation at The Burchfield Penney Art Center in Buffalo NY, which took her over two years to develop and complete. The main portion of the installation has a lone tree standing midst a field of shiny buckets containing tree stumps.

“The Last Tree” references a quote from a presentation by the historian, geographer and Pulitzer Prize-winning author, Jared Diamond – “What do you imagine the islander (of Easter Island) was thinking when he chopped down the last tree?”

This was an island that was once verdant and lush with a thriving people – now treeless, its economy dependent primarily on tourism for the forgotten history of the Moai statues.

. . .
Jared Diamond could have easily cited any number of similar instances of plant or animal extinction due to human ignorance and hubris. To be sure, long before the rise of humans, natural calamities have caused number of extinctions – five notable mass extinctions – in the Earth’s history of evolving life.

According to some studies and evidence gathered, we’re in midst of a sixth mass extinction – and this time, as science writer Elizabeth Kolbert presents in her Pulitzer Prize-winning book, The Sixth Extinction: An Unnatural History, it is human cause, so much so that scientists have named this current geologic period the Anthropocene Epoch.

. . .
In a sense, artists are like a voice in the wilderness.

In Lost Trees Reingold continues this line of thought, carrying over some of the visual elements, materials experimentations and components from The Last Tree.

On the walls are delicate drawings, both large and small, of tree stumps with attached root systems.

Occupying the center of the gallery is an installation, an arrangement of four elements – white silk organza columns, trees planted in buckets with branches wrapped in thin strips of white yarn, tree stumps, and a curling spiral of white bricks winding through it all.

During the opening, one visitor remarked that it looked like a winter scene, as in a Hallmark card scene, which at a quick first glance, it sort of does. But with further observations, that winter scene could also be The Winter of Our Discontent – quoting the title of the John Steinbeck novel.

But as with all good art, there is no one single interpretation, perspective, or an absolutism once that art leaves the artist’s studio.
. . . . . .
The trees, painted white, are in the buckets constraining the roots, with wrapped branches as a way of protection, like a self-contained greenhouse – but the white wrapping also resembles infestations of tent caterpillars, a hairy-looking caterpillar that weaves cocoon nests covering branches of the host tree. In itself that’s not a problem, for trees in general can support and live in symbiosis with a myriad of birds, animals, plants and other organisms – but in severe cases, tent caterpillars can defoliate the whole tree.

Reingold’s white silk organza columns could be tree trunks, or the idea of trees – translucent with embroidered veins and rubbings of tree wounds sewn in, bearing the essential aesthetics of the whole exhibition.

The bricks follow a spiral path – a natural form found throughout nature from the tiniest snail shell to unfurling fern leaves to cloud formations and the shape of galaxies. The spiral is a symbol all cultures, from the most ancient to current, have found significant, imbuing it with meaning while incorporating it into their myth making.

The brick spiral unites and anchors the whole installation, and the visual experience of it.

An interesting detail is that the bricks are made from up-cycled paper – shredded old documents, and junk mail that regularly fills the artist’s mailbox.