We usually learn the best lessons the hard way…

Even if someone tells us to look out!

For example, this past weekend’s performance by the Dunedin Concert Band was themed “Epic Movies” and we shared some incredible movie scores.

The music was incredible, and the quality of playing “had increased steadily over the past couple of years” said a long-time member of the Arts & Culture Advisory Committee for the City of Dunedin.

Perhaps because I ended up wearing a total of 13 hats! Almost one for every piece we played.

But the lesson came when I made my announcements to the energetic and very happy, upbeat audience.

Announcements from the stage are usually dull and boring, so I try to spread them out and make them interesting.

We’ve all been there, anticipating an awesome event, when some faceless voice bellows from the depths of the auditorium to guilt you into turning your cell phone off.

Way to spoil the excitement, right?

So in my concerts I usually make the announcement myself and actually ASK for cell phones to remain TURNED ON!

Just make sure it is on silent mode, but keep the phone out and snap away.

So I take my own cell phone out of my pocket and hold it up as an example.

One concert a few years back I clearly pressed the wrong button and did NOT turn the phone to silent mode.

Yes, it rang during the performance.

Watch my embarrassment in this video!

But as far as pictures go, I like to take them myself once in a while.

This Sunday, I thought I took a couple of the audience, but now I can’t find them anywhere.

I even turned around and asked the audience to wave while I took a selfie!

Except I was rushing,

And therefore shaking, and… 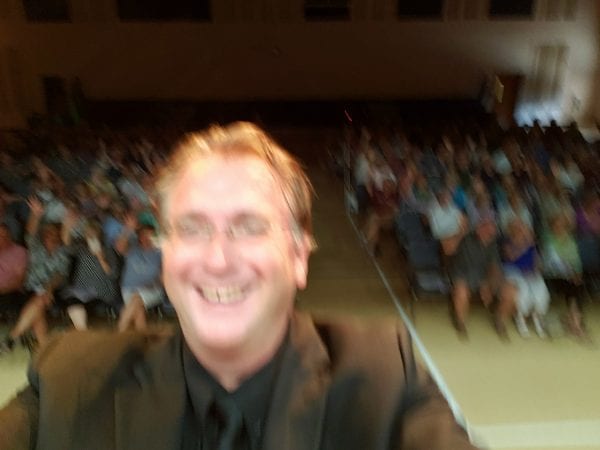 Take your time, Stephen… it’s always worth it!

At least a photo with our surprise visitors turned out OK. 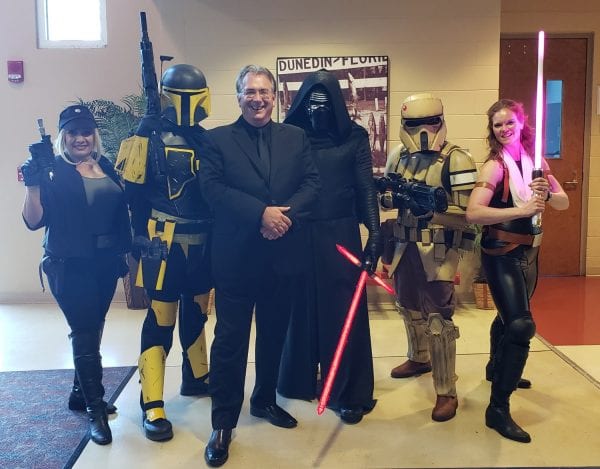 Most of the concerts I do with the Dunedin Music Society have some sort of unexpected and fun element in them… it will be great to see you at one! Or any of my other concerts which are listed at www.StephenPBrown.com