The anticipation was palpable in the Raymond James Theater of American Stage as we relaxed in our comfortable chairs waiting for a 1940s-style Much Ado About Nothing. We were immediately hit with the wow factor of the elaborate set — a summer courtyard in Messina, in the Florida Keys. It seemed so real and inviting.æ You could literally hang from the balcony.
My mind started to wander, thinking about my UTæyears studying filmmaking and writing; I was looking at the cheerful volunteers and the professional rig system with dozens of Fresnel lights separated in sets of color gels filters — what a brilliant art form theater is.
The artists on Much Ado‘s crew deserve first mention. We can never thank enough the lighting (Ryan Finzelber), costume (Frank Chavez) and set designers (Jerid Fox), as well as the professionalism of the stage manager and sound designer (Rachel Harrison) and the rest for such a great experience.
The show is part of American Stageäó»s “We the People” season, which has been so impressive so far on so many levels, but mainly that it questions the foundations of our culture and historical perspectives. Happy 40 powerful years American Stage!
I almost felt like I was at Broadway there for a second, reminiscing my nerd days of opera-listening while doing algebra homework. Shakespeareäó»s comedic Much Ado inspired French composer Berliozäó»s opí©ra comique in two acts: Beatrice et Benedict, which focuses more on those two äóìflawedäó characters that everyone messes with and gossips about, but in modern times we all identify with, in one way or another.
In the play, Benedick (Brock Vickers) and Beatrice (Stephanie Gularte) have become through the ages the main literary focal points, to the point where they are today considered the leading roles of the more traditional versions of the play, even though their relationship is given equal or lesser weight in the script than that of Claudio (Matt Acquard) and Hero (Margee Sapowsky).
It was a pleasant surprise to witness Producing Artistic Director Stephanie Gularte’s debut at American Stage fulfilling the role of Beatrice with precise and natural ease, and the rest of the cast was on point, too. The juxtaposition of the Bard’s English and the setting is fascinating — we go from feudal Sicily to post-World War II-era Florida. It felt like a 50s Hollywood movie wrapped in a sweet summer night’s dream, surrounded by beautiful people whose accents had been frozen in time since the 1500s; like a hilarious Bard of Avon spell on the Keys!
äóìI have always been especially attracted to Shakespeare,” director Benjamin T. Ismail said before the show. “There is true magic in finding contemporary resonance and humor in material hundreds of years old. I look forward to be infusing Much Ado with a fresh stylized interpretation of the local pizzazz and nostalgic flair of 1940s Key West. Itäó»s shaping up to be a gorgeous show with loads of fun and heart-string tugs.äó He couldnäó»t have said it any better — it’s a gorgeous show indeed.
Much Ado is full of music and dance and exuberance.æ The original script holds up as the main force of inspiration for the romantic comedy genre. American Stage’s modern version has so many funny moments that it is bound to make you laugh out loud. For example, Dogberry (Richard Watson) the local watchmen offered an incredible comedic relief, among plenty of other moments, such as pretty much anything with Borachio (Andrew Vertucci) in it.
On the ancient meaning of the title, the wordsænothing and notingæin Shakespeare’s day were near-homophones. The normal take on the title is that it implies that a great fuss (“much ado”) is made of something which is really “nothing,” such as the unfounded claims of Hero’s infidelity and the unfounded claims that Benedick and Beatrice are in love with one another. It could also be understood as Much Ado About Noting. Much of the action centers on the interest in and critique of others, written messages, spyingæand eavesdropping.
The games and tricks of deception played on people in the play often have the best intentionsäóîto make people fall in love, to help someone get what they want, or to lead someone to realize their mistake. However, not all are meant in good faith, and/or the outcome is not always as intended, that’s the main juice of the play — without giving too much away or focusing on the obsolete genre roles of a patriarchal society. During the time of the play there was a sense of superiority to women, which is precisely what Much Ado tries to achieve. It pinpoints how those traditional gender cliches are turned on their head. 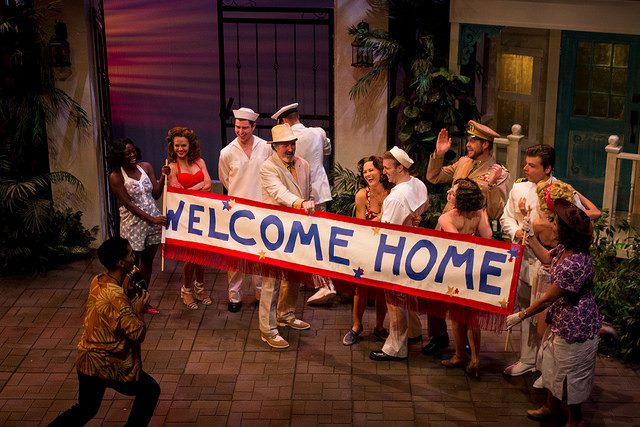 MUCH ADO ABOUT NOTHING
Runs Nov. 8-Dec. 10
Purchase tickets at americanstage.org.
Laura Spencer is the featured artist for this play. Her signature original artwork was unveiled opening night last week and will be donated as a fundraiser for the American Stage 40FORWARD art campaign, so come check it out at one of these great events before is gone:
Much Ado About Oracle – Artist Reception with Laura Spencer and George Retkes
Fri.,æ Nov. 17; happy hour 6-8 p.m. in the lobby before show at 8 p.m.
Use special promo code “LAURA” and receive $10 off ticket price this night only.
Spotlight Series: CHATBACK with the Cast after the performance Thurs., Nov. 16; Sun. Nov. 19.
WE THE PEOPLE äóñ Artist Meet and Greet Reception and Young Professionals Nightæisæ Sun., Nov 26.
Spotlight Series: COMMUNITY CONVERSATIONS: Tues, Nov. 28 at 7 p.m.
Give friends Promo Code SHARE for $2 off tickets, good for any performance running through Nov 19æ(excludes opening night and preview performances),
American Stage invites military personnel and veterans to the theater:
Active Military receive one free ticket with valid ID plus 20 percent off a companion ticket per show
Retired Military receive $5 off single ticket through the run of MUCH ADO ABOUT NOTHING (12/10/17) or SHAKESPEAREäó»S LOVERS (11/26/17). Use promo code VET online.
A special performance has been added where active military can attend for free and retired military receive $11 advance ticket to see MUCH ADO ABOUT NOTHING on Nov 21 at 7 p.m. Use promo code VET11 online.