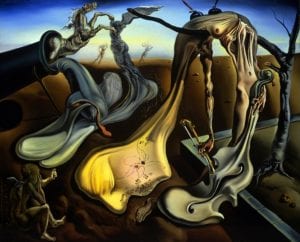 It’s not uncommon to see an artist standing at an easel in a museum busily painting a copy of one of the paintings on the wall. I’ve never done that myself. In fact, I’ve never tried copying another artist’s work…until this year. Salvador Dali’s work has had a huge influence on my own. So, since I’m a docent at the Dali Museum and see his work very often, I thought I’d choose one of his paintings and give it a try. To be honest, I vastly underestimated how difficult the process would be. The Dali Museum does not allow artists to paint in the galleries so I was forced to work from photographs which adds greatly to the difficulty. Nothing matches the experience of standing before an original. I began by choosing stretcher bars that matched the dimensions of Dali’s original. Knowing that Dali often worked on factory primed canvas, that’s what I used too. It’s safe to assume that Dali used tacks instead of staples but I forgave myself that deviation.

Rather than work freehand I projected Dali’s painting onto my blank canvas and traced the outlines. This saved an enormous amount of time and increased the accuracy of the composition. I then applied an imprimatura which is a thin wash of gray paint that tones down the white of the canvas. Dali did this very often.

Below are photos taken at various stages. This is as far as of gotten. A project that I thought would take a few months has stretched to over a year! My hope is to be finished before the end of 2017. I also plan to make a replica of the antique frame that it has been in since the painting was purchased in 1943.

This has been an incredibly informative exercise. I could say volumes more about the painting process, my discoveries, insights into Dali’s mind, etc. but plan to gather all my thoughts at the conclusion. This could make for a very entertaining lecture which I hope to present at some point in 2018.