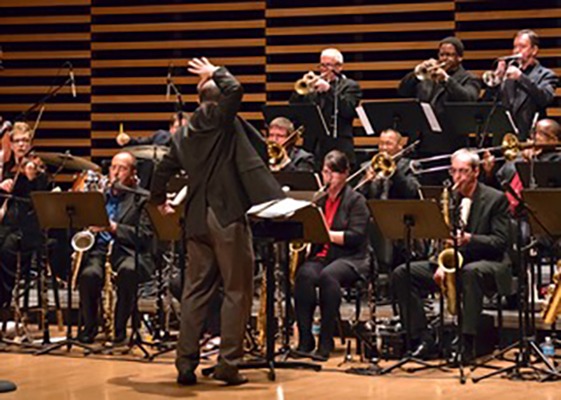 Jazz Surges Ahead at
Anniversary Concert of Celebrated Band

. . .
Benny Goodman just might bend an ear this week. So will Duke Ellington, Count Basie, Glenn Miller and the Dorsey brothers. They all love the heavenly sounds of their big bands, and the players who keep their spirits alive today.

One would be Chuck Owen. Yes, he’s still around, with one foot back in that golden era of American swing, and another on the pulse of the present. This week, he celebrates the 25th anniversary of his Jazz Surge, a group he founded at the University of South Florida School of Music, where he established its first faculty post of Jazz Studies back in the early 1980s.

The 20-member ensemble is made up of musicians from Florida, New York, Nashville, North Carolina and Utah, all dedicated to swinging with a modern twist. Many of the compositions in the March 24 concert were written by Owen and appear on the group’s string of seven CDs.

“It’s a professional big band, and as a general rule you don’t hear much of them these days,’’ Owen says. “But this is a different kind of big band because we have a violinist and two guitars. It’s very much of an Americana, folk, classical, jazz vibe.’’
. . .

The latest Jazz Surge CD was released last year, Within Us.

. . .
Some of the music from the group’s most recent recording, Within Us, will be performed during the anniversary concert. The CD was praised as “hands down one of the top 10 jazz albums of the year” in 2021 by Lucid Culture.

Jazz Surge has been called a “big band for people who don’t like big bands.’’ Listen to any of Owen’s Grammy-nominated recordings and you are swept in two directions – backward and forward. The music synthesizes what once was, and crystallizes what’s now – often on the spur of the moment.

“I just want listeners to have a wonderful time,’’ he says of the concert. “The cool thing about jazz is that things happen spontaneously. In spite of 20 people on stage, there’s an intimacy about the music. Even though my music is compositionally based, there’s still that blend of improvisation.’’

The reputation of Jazz Surge stretches far beyond Tampa Bay. JazzTimes describes Owen’s band as “riotous and joyous.” It was named “one of the best large jazz ensembles in the country” by the New York Music Daily.
. . .

. . .
“I’m excited to see Chuck getting well-deserved recognition for his brilliant efforts as a composer, arranger and bandleader – work that those in the jazz community in Florida and beyond have appreciated for many years,’’ says Philip Booth, a Tampa-based bassist, contributing writer for JazzTimes, Jazziz and Relix magazines, and leader of the long-running band, Acme Jazz Garage.

“As demonstrated with the pieces he’s recorded with Jazz Surge, he has a distinctive voice as a large-ensemble composer, drawing from modern jazz as well as fusion, pop-rock, folk, Americana and other elements,’’ Booth adds. “And he sometimes incorporates instruments and textures you don’t expect to hear in the big-band format.”

Owen, 68, is rightfully proud of his band, as well as his prolific composing career and string of awards and commitments. He holds the titles of USF Distinguished Professor Emeritus and president of the International Society of Jazz Arrangers & Composers. In addition to the March concert in Tampa, Owen takes his band to gigs in Orlando and Cocoa.

“I just retired from USF in August, but I’m failing miserably at it,’’ he says about his busy schedule. “I get a complete F in retirement because I still do a lot of the things I’ve always enjoyed. I’m involved in a lot of projects.’’
. . .

In addition to a recent Guggenheim Fellowship, Owen is the recipient of the prestigious 2000 IAJE/ASCAP commission in honor of Louis Armstrong and three Florida Individual Artists Fellowships. He has published more than 100 works for jazz ensemble and is a frequent guest artist, clinician and lecturer at universities around the country.
. . .

Excerpts from The Jazz Surge’s 2017 CD, Whispers on the Wind,
with special guests Randy Brecker and Gregoire Maret.

. . .
Guitarist LaRue Nickelson, a USF professor of music and a member of Jazz Surge for 20 years, says Owen’s work ethic rubs off on anyone who plays alongside him.

“I think the biggest thing that I as a student and later as a teacher and performer learned from Chuck is that it’s all about the work,’’ he says. “Chuck is constantly working on his music and I’ve tried to emulate that with my own practicing and writing.’’

During his tenure at USF from 1981 to 2021, Owen earned praise as an educator and mentor from students, academics and composers. But his reach is much broader, and the fact that members of the Jazz Surge come together from all over the country speaks highly of its founder, says Bob Seymour, who for 35 years served as jazz director and radio host at WUSF 89.7 FM.

“Throughout the jazz world in general, what Chuck has done is a wonder,’’ says Seymour, who is president of the non-profit Tampa Jazz Club. “He long ago became a composer of real distinction, with his own unmistakable sound.

“And (as they say about Duke) his orchestra is his instrument, and they sound like no other band… the spirit of this orchestra is a remarkable thing to see, and hear.’’
. . .