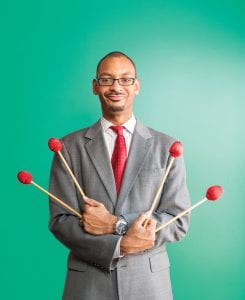 Jason Marsalis has delved into a vast array of musical styles since he started playing drums at age three, but his latest project ranks among his most unusual. The BGQ Exploration (note the initials) uses as its primary influence… wait for it… the Benny Goodman Quartet. Yes — that fellow, the bespectacled, clarinet-blowing “King of Swing,” who produced massive pop hits like “Sing, Sing, Sing” with his big band, but also led trios, quartets and sextets.

So how did the youngest music-making brother of the fabled, New Orleans-bred Marsalis clan find his way to Benny Goodman’s small-group music?

“When I started getting more seriously into vibes, I explored Lionel Hampton,” Marsalis explains, referencing the vibraphonist in the Benny Goodman Quartet. “There were some musicians I knew who could play in that style, so I got a few gigs together to play some of those tunes. I thought, ‘Why not make a band out of this?’”

The BGQ Exploration is not a tribute act that plays exclusively Goodman’s quartet music. Rather, Marsalis, also an accomplished composer and arranger, has given the vintage treatment to a few of his original tunes, as well as other songs (including ones by guitarist John Scofield and drummer Bill Bruford) to complement King of Swing numbers like “After You’ve Gone,” “Sweet Sue, Just You,” and “Avalon.”

The music — which Marsalis and company will perform at the  Side Door club at the Palladium on Thursday, November 21 — carries all the familiar stylistic earmarks of the era: straightforward, lively swing beats with an irrepressible bounce; sweet melodies and ear-pleasing solos that favor feel over complexity.

To sum up: the music is fun — something which cannot be said of much of today’s forward-thinking jazz. 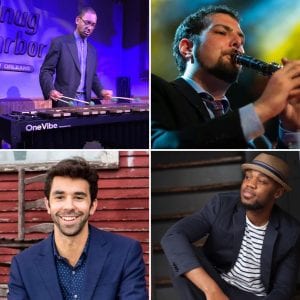 Marsalis, 42, acknowledges that the allegedly hip progenitors of today’s modernist sect would look askance at his look backward. Not surprisingly, he’s unconcerned. And in the family tradition, he has an eloquent retort at the ready:

“Jazz used to be fun ‘cause it was dance music,” he says. “Then, in the ‘60s, the music became about the forms that musicians could expand on. Of course, a lot of it was amazing music. The mindset was that in order to be valid you had to come up with the next new sound. That lasted into the ‘70s in different ways.

“When you get into the ’80s, and that generation wanted to swing again, [detractors] would say, ‘Oh, that’s old music, that’s been done. Music is about finding something new.’ Which isn’t really true. The newer [jazz] — which I’ll admit I’m not the biggest fan of — has a lot of guys striving to do newer and newer things, but they’re not at an advanced enough level. They’re not ready for it. A lot of the music lacks substance. They think they’ve done something new when that usually means they’ve taken the swing element out.”

Some facsimile of the above quote could’ve come out of trumpeter Wynton Marsalis’s mouth, which might make you think that little brother Jason is towing the elder brother’s line. And you would be wrong. Reverence for tradition is part of the Marsalis aesthetic, but it’s not as if Jason was subjected to Wynton’s rants on jazz purity. After all, when 20-year-old Wynton released his self-titled debut album in January 1982 and quickly became the world’s biggest jazz star and the poster child for neo-traditionalism, Jason Marsalis was four years old and playing a toy drum kit.

Neither Wynton nor saxophonist Branford, a year older, were among Jason’s mentors. “I had a relationship with them, but it was a distant one,” Jason explains. “I’d see them here and there, from time to time, but they were already well into their careers when I was just a kid. As I got older, they supported me and gave me pointers, but my biggest mentor was Dad.”

That would be Ellis Marsalis, the now 84-year-old pianist and family patriarch. According to Jason’s bio, he “was progressing so rapidly as a drummer that in 1984 his father started using him consistently on engagements.” Jason would’ve been seven. Brother Delfeayo Marsalis, a trombonist and producer who’s just 12 years older than Jason, took a more hands-on role in younger bro’s musical development.

It’s reasonable to wonder if Jason demurred from playing trumpet or saxophone to avoid the shadows of eldest brothers. “Nah, sometimes I’d pick up the horns and blow on ‘em, but I never had any interest in doing that,” he says. “I loved playing the drums and that was it.”

And then came the vibes, played with mallets and emitting a sweet, chime-like sound. Jason messed around with the niche instrument, but didn’t seriously undertake it until around 2000. And for several years hence, he worked mostly as a drummer. “I wasn’t that good at all,” he says of his early vibraphone playing. “But I did get a gig every Monday and slowly got better and better and now I can play in a way that’s more convincing.”

Not exactly a ringing self-endorsement from a guy who released his first album as a vibraphonist, Music Update, in 2009. “Vibes are a lot trickier,” says Marsalis, “You’ve added melody and harmony. If you miss a note, it sticks out. If you miss a note on drums, no one notices.

“I think I’m doing good. I’m starting to become more musical, getting better technique and accuracy. I can at least put together a good show that the people can enjoy.”