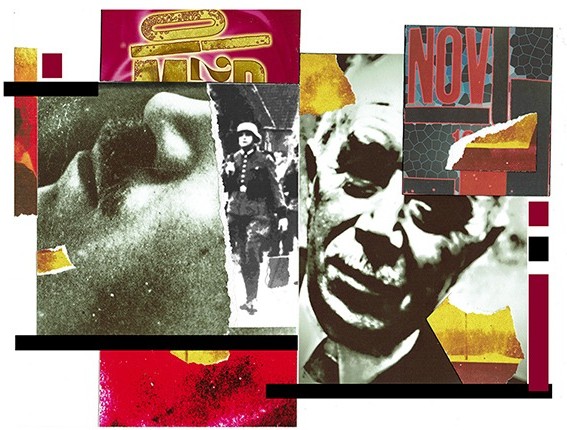 “As publisher of De Blauwe Schuitt, a series of underground booklets produced by Jewish dissident poets and writers during the Nazi occupation of Holland, Werkman was imprisoned by German secret police in 1945 and executed without trial just three days before the country’s liberation.

“Although much of his work was destroyed at the time of his execution, the remarkable examples that remain tell the story of a maverick designer and typographer whose graphic vision was playful, bold, experimental, and unwaveringly optimistic.”

Excerpts from the Yale University Press website
about its book H.N. Werkman by Alson W. Purvis

As a young graphic designer and artist in New York in the late 1970s, I was enamored by fine printing and experimental concrete poetry.

Even in the vast, eclectic cultural market of the Big Apple, that was an esoteric interest. But, there were bookshops and private booksellers that catered to every taste including experimental typography of the 1930s and ‘40s.

Through these venues, I became acquainted with the work of Willem Sandberg. He was a Dutch typographer and designer, and a member of the Dutch resistance movement that saved Jews wanted by the Gestapo by forging documents. After the war, Sandberg had a long and distinguished career as curator at the Stedelijk Museum in Amsterdam.

Sandberg was the first and foremost member of the international art establishment to recognize the brilliance and importance of the experimental typography and illustrations of Hendrik Nicolaas Werkman.

Without Sandberg’s acumen and dogged persistence, this body of historically significant creative work would most likely have been lost forever.

Personally, Werkman was something of a loner and iconoclast. He was also considered unlucky and somewhat unlikable by many of his contemporaries. His lack of business savvy often branded him a failure.

Nonetheless, his deep passion for letterforms and playful creative expression allowed him to produce compelling images that still resonate today.
. . .

View images of H.N. Werkman’s work on the web

. . .
Perhaps the greatest compliment a living artist can pay to a dead artist is to be actively inspired by his or her images…creating imagery in the spirit of the departed rather trying to simply mimic a particular idiosyncratic style.

In this case, H.N. Werkman graphics have become seed crystals in my own art journey from the late 20th century to the new millennium.
. . . . . .
Although the Nazis brutally and arbitrarily murdered him, they could not kill off his enduring creative vision. Additional Thoughts on this Series

. . .
As far as I can tell, these fine art prints are the only images that incorporate visual elements from Werkman’s graphic prints with archival photos of the capture and deportation of Dutch Jews during the Holocaust.

The Diary of Anne Frank, and the iconic photo of her young face, tends to define the Holocaust in Holland. But it was just the tip of the proverbial iceberg.

Approximately 75% of Dutch Jews died during the Nazi occupation of their country. This compares to a roughly 75% Jewish survival rate in both France and Germany during the Holocaust.

The Germans and their Dutch collaborators turned this once vibrant and important Jewish community in the Netherlands into a mere footnote in history.
. . . . . .
It has been said that “one death is a genuine human tragedy but a million deaths is just a statistic.” The human mind cannot fathom genocide. The numbers are simply much too large to comprehend. People can grasp the reality of our one sun but not billions of stars in our universe.
. . . . . .
As a graphic artist and writer, I identify on a gut level with H.N. Werkman and his world of creative Jewish dissidents. And as a 72-year-old American Jew, I have managed to live nine years longer than H.N.W.

I often wonder what he would have created with today’s miraculous digital printing technologies and astounding internet imagery.

And how he would have visualized being a Jew in a perpetually precarious world? . . .
The initial multi-media collages were scanned and heavily modified in Photoshop. They are printed on archival digital fine art 100% cotton rag paper with pigmented inks. All images can be printed onto 8.5×11 to 17×22 inch sheets. Photographic images were captured from the internet with an iPhone camera.
. . .

View more of Bob Barancik’s series in homage
to H.N. Werkman at creativeshare.com/exhibits