I don’t believe there’s such a thing as writer’s block. I find that once I make myself sit in front of the computer or at a coffee shop with my notebook, all I can do is write, if only not to waste my time. Of course, not everything I write during those occasions is good, but I believe it is still useful. The nugget of a better piece might be there, amid all the words that don’t end up amounting to much. The trick is to just make the time to sit down and write.

Having said this, I also don’t subscribe to the familiar belief that a writer should write x number of words every day. I fully gave myself permission to write when I felt like writing when I learned that Marilynne Robinson, whose work I’ve mentioned in these blogs before, doesn’t write every day, but only when she wants to (she considers reading the activity we should do daily). Sometimes it’s just not a good day to write. 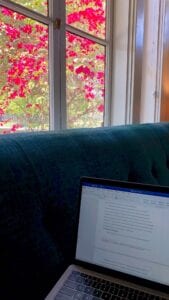 Since my uncle passed, no day has been a good day to write. I’m still processing all the anger I feel about the circumstances of his death, and I don’t believe anger is a good place to write from. Maybe one day I’ll be able to look back on this feeling and articulate something having to do with it on paper, but I don’t think that day is close. Aside from that, though, it has been truly difficult to concentrate. It feels like I’ve spent the last two weeks in a fog. I’ve forgotten to do tasks for my job, and it’s very hard to focus during the day. This is what feeling stuck is like for me. It doesn’t so much have to do with the lack of ideas as it does with a lack of energy, an inability to focus, and the feeling of grief present during every waking hour, like a low-grade fever.

Here’s to next week. Hopefully, I’ll be able to write then.