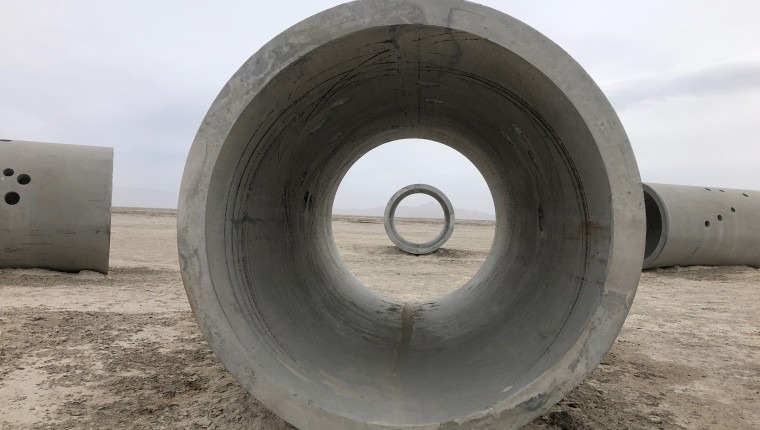 A Moment of Land Art
with Nancy Holt’s Sun Tunnels

. . .
It is all an adventurous, a celebratory, and a life preserving act when seeking out art – whether going couple of miles to galleries or museums in town, or a few thousand miles cross country, or over the ocean blue.

A recent road trip had me driving from Tampa to Death Valley where some friends were gathering, and with it, opportunity to explore a few of the many museums, galleries and art sites en route – the Menil Collection Campus in Houston’s museum district; Marfa, Texas where the artist Donald Judd’s single mindedness revived this dying town into an art Mecca; the southwest Native American arts traditions that survived the onslaught of militarized European settlers – and huge land art sites dwarfed in an even more enormously vast untamed western landscape.

The most physical of all these, unsurprisingly, were treks to the land art sites where GPS navigation becomes sketchy. The roads, or lack of, became more a pilgrimage in the hero’s journey sense than a pleasant afternoon art outing. Sturdy hiking boots recommended. This may have been part of the artists’ intent in finding these remote locations.
. . .

Ultimately I was only able to visit Double Negative, Sun Tunnels and Spiral Jetty.

The Lightning Field, which requires reservations, was not yet opened for the season. The Roden Crater – under construction for the past 45 years and not yet open to the public – was one I wanted to see anyway, even if from afar.

After turning off the main highway I-40 onto smaller windy paved roads, then onto more miles of dirt roads that eventually led to a gated fence at the base of the crater. It felt lightly forbidden, and so far from anywhere.
. . .

. . .
Land art, also known as Earth works began in the late 1960s-’70s when artists were seeking to push the edges of possibilities beyond limitations of museum walls and commercial gallery appetites.

Some have attributed this artistic direction to the zeitgeist of that era, with space explorations returning images of a planet sans boundaries in the blackness of space, the nascent environmental movement, ideals of the counter culture breaking many norms. . .

The artists themselves, however, might trace the practice back further, to times when people were stacking stones, piling up dirt, and inscribing into the Earth – e.g. Stonehenge in England, Indian Mounds in Ohio, the Nazca Lines in Peru – sites that archeologists and anthropologists have long studied, and continue to speculate on their origins, purpose and meanings.
. . .

. . .
Nancy Holt and Robert Smithson, in 1969, specifically toured and studied ruins and stone sites throughout England and Wales. Michael Heizer, growing up, traveled with his father, an anthropologist, on field studies to places as varied as California, Nevada, Peru and Bolivia.

Of the three land art works I was able to get to, the most well known and one that receives a fair number of visitors, is Robert Smithson’s Spiral Jetty. It’s even featured on BLM (Bureau of Land Management) maps, so the dirt roads going there are more or less maintained.

The road to Michael Heizer’s Double Negative on the other hand is more a trail, and in a few place it would be best to have an off-road vehicle to better handle the rocky trauma the tires and suspension might suffer.
. . .

. . .
As we all have doodled in the dirt when we were kids, the adult Michael Heizer continued, only now with earth-moving machines and dynamite. Double Negative is an extreme example of inscribing into the Earth, making a line 50 feet deep, 30 feet wide and 1,500 feet long that is separated in the middle by a natural gulch. He once said, “I think earth is the material with the most potential because it is the original source material.”
. . . 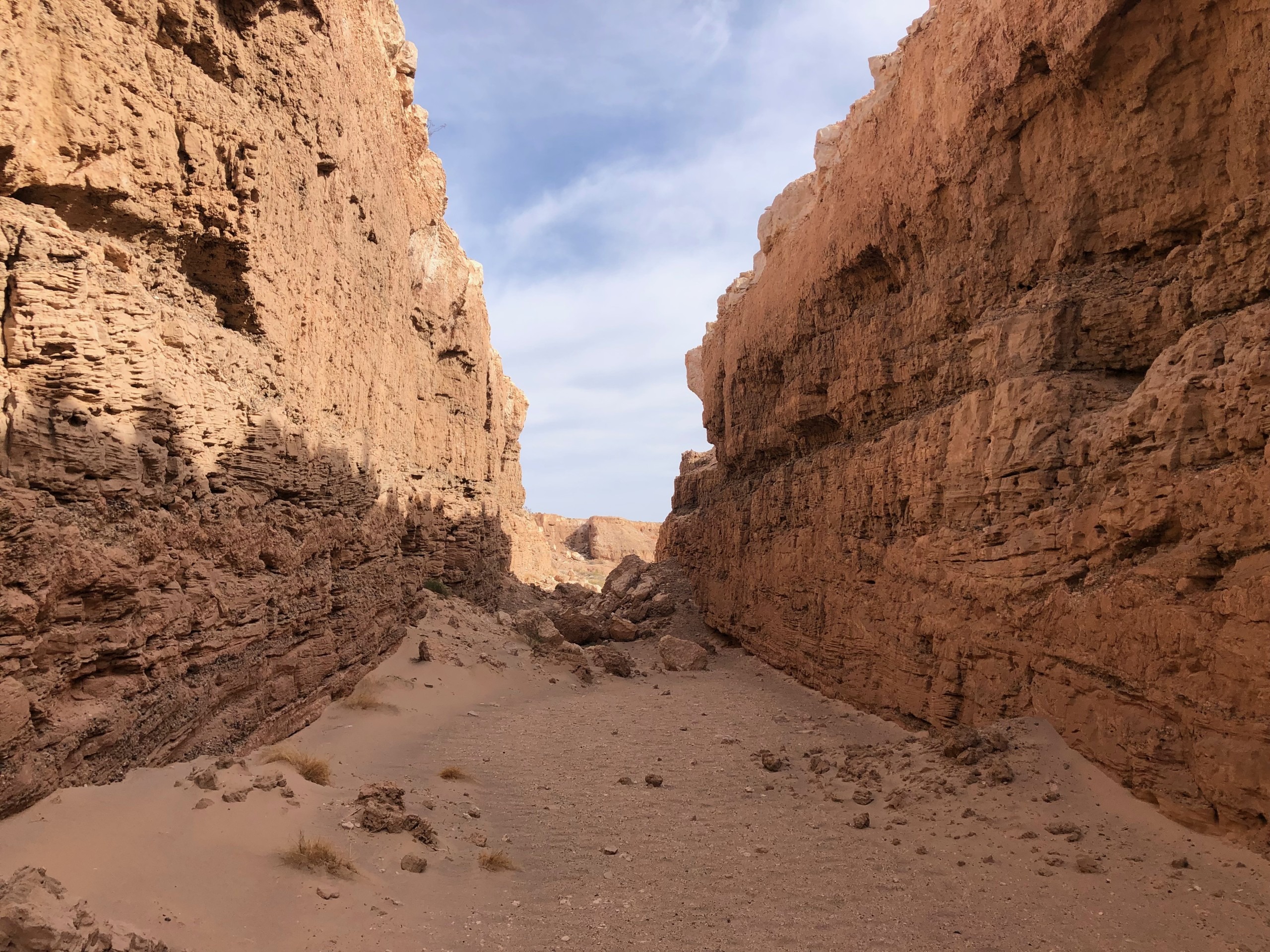 . . .
The washboard roads leading to Nancy Holt’s Sun Tunnels have their own challenges. There’re several forks in the road, and at the first of these, I went left (the Sun Tunnels are 180 degrees opposite) and onto a byway that was once the original route of the Transcontinental Railroad. The rails in this section were dismantled to supply steel for World War II efforts. Occasional BLM signage marked notable historical spots along the byway making it an educational drive against a vast backdrop of mind-expanding emptiness.

While a part of me eventually sensed that this was the wrong way, the landscape was so mesmerizing I kept going, until a stray rail spike from the past punctured the left rear tire.

After changing to a spare tire and miles from nowhere in northwest Utah, remains of the day were devoted to locating the nearest tire shop, which ended up about one hundred miles away, across the state line to Wells, Nevada, where new set of rear tires were purchased as the “golden” spike made an un-repairable sized hole.

Early next day, bracing the washboard roads again – the discovered technique for a smoother ride is to drive faster – to that first fork, made a smart right, then a few more right-left turns and Eureka! The Sun Tunnels.
. . .

. . .
Unyieldingly, weather was far from sunny, temperature freezing, with a 30-40 miles an hour wind whipping up a dust storm, limiting sight, making breathing difficult. The Covid mask now served another function – keeping the dust from filling my nostrils.

After surveying many locations, Nancy Holt purchased 40 acres in the Great Basin Desert, about 4,000 feet above sea level west of Utah’s Great Salt Lake, and ten miles north of the Bonneville Salt Flats, in order to realize her Sun Tunnels land/sky project.
. . . 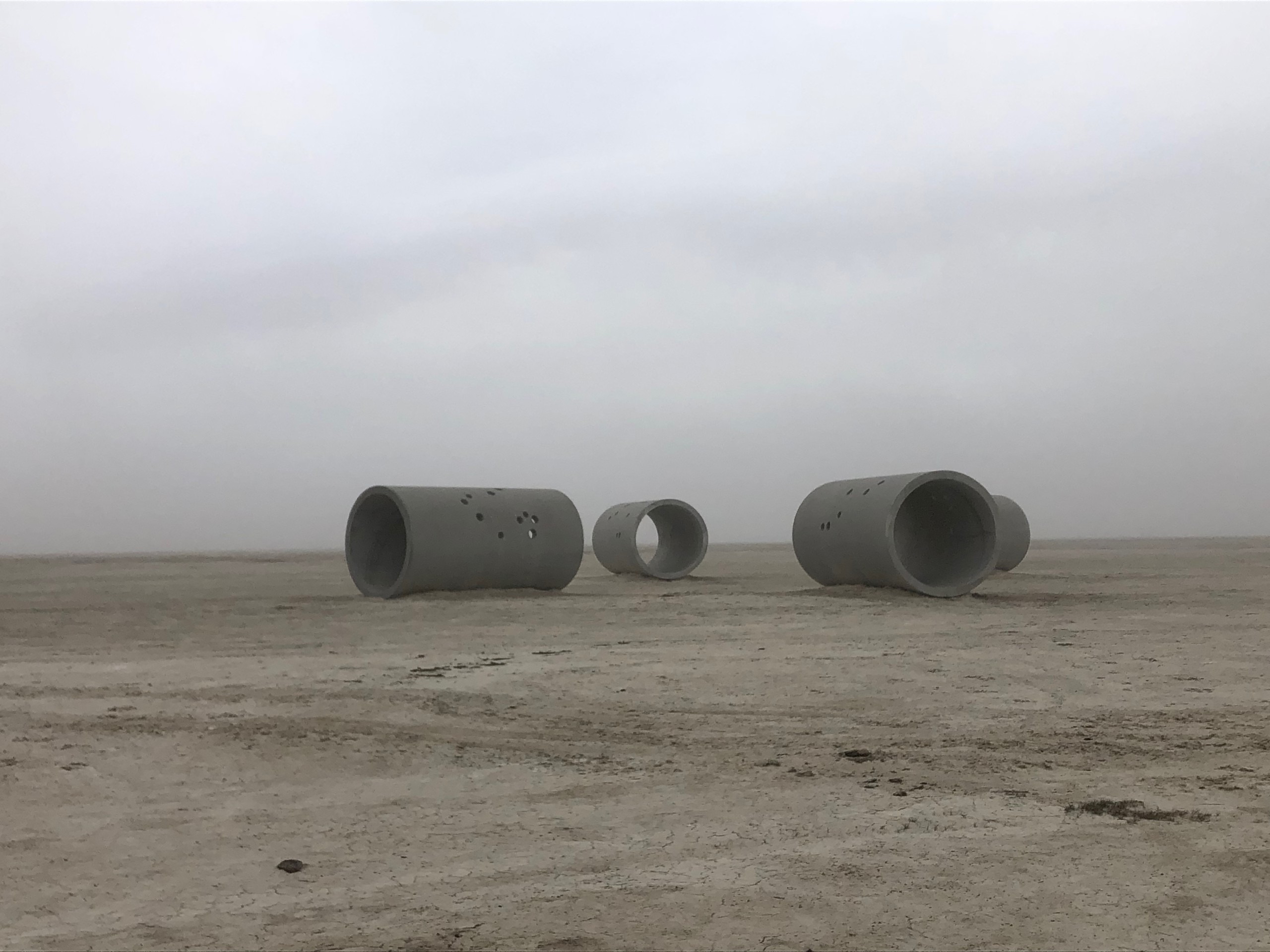 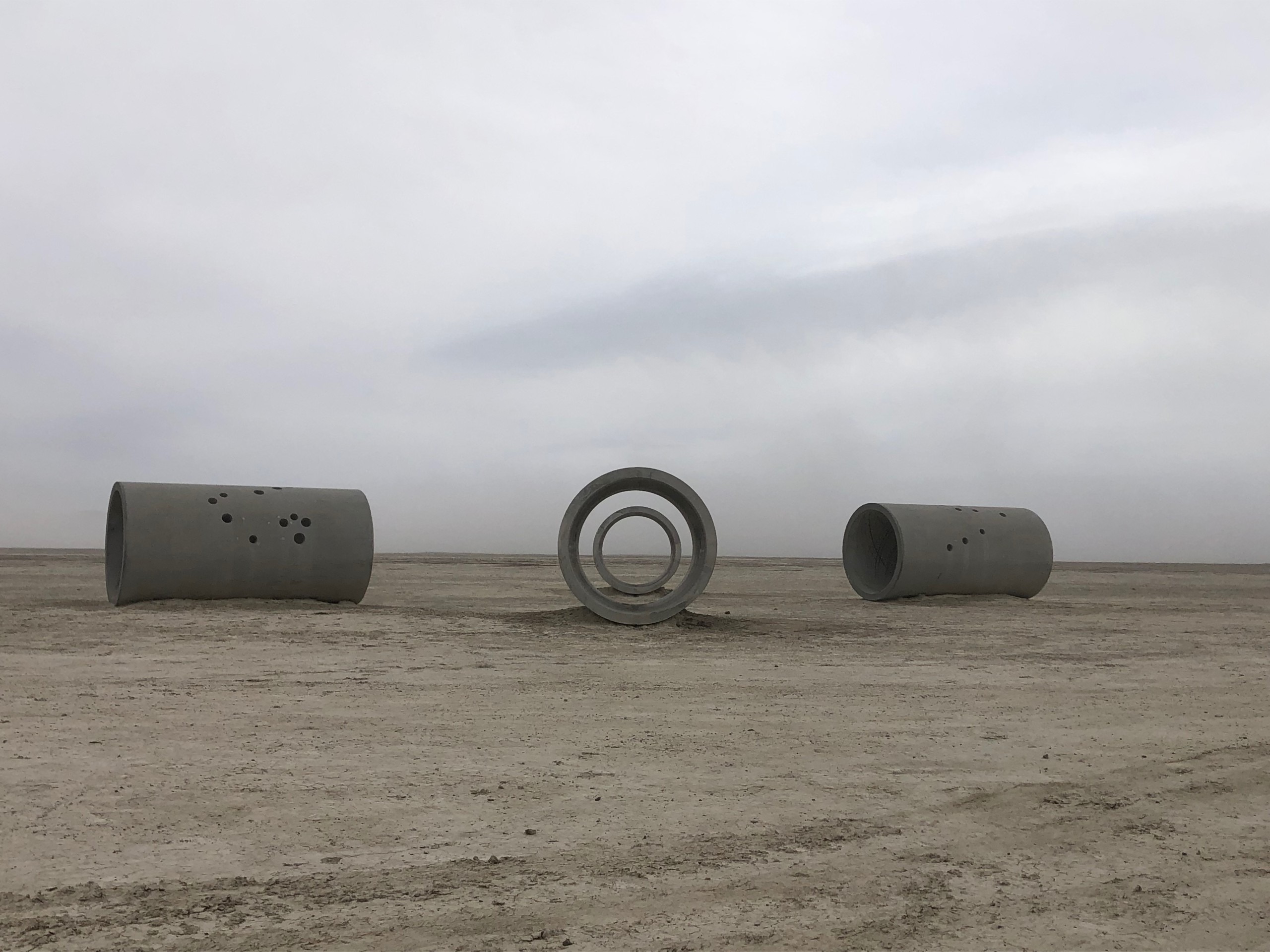 . . .
The Sun Tunnels are made of four concrete tubes, each 9 ft. high by 18 ft. long, with walls 7.25 inches thick, weighing 88 tons total. The tubes in each axis are 50 ft. apart, making each axis 86 ft. long. Holes, in arrangement of the constellations Draco, Perseus, Columba and Capricorn, were drilled through the top of each tube, the holes sized to correspond to each star’s brightness within the constellation in which they reside. The tubes were then placed in an “X” formation, with one axis aligned with the summer solstice and the other with the winter solstice.

During the two solstice days, June 21 and December 21, the sun is centered onto the ends of the respective tunnels at sunrise and sunset.
. . . 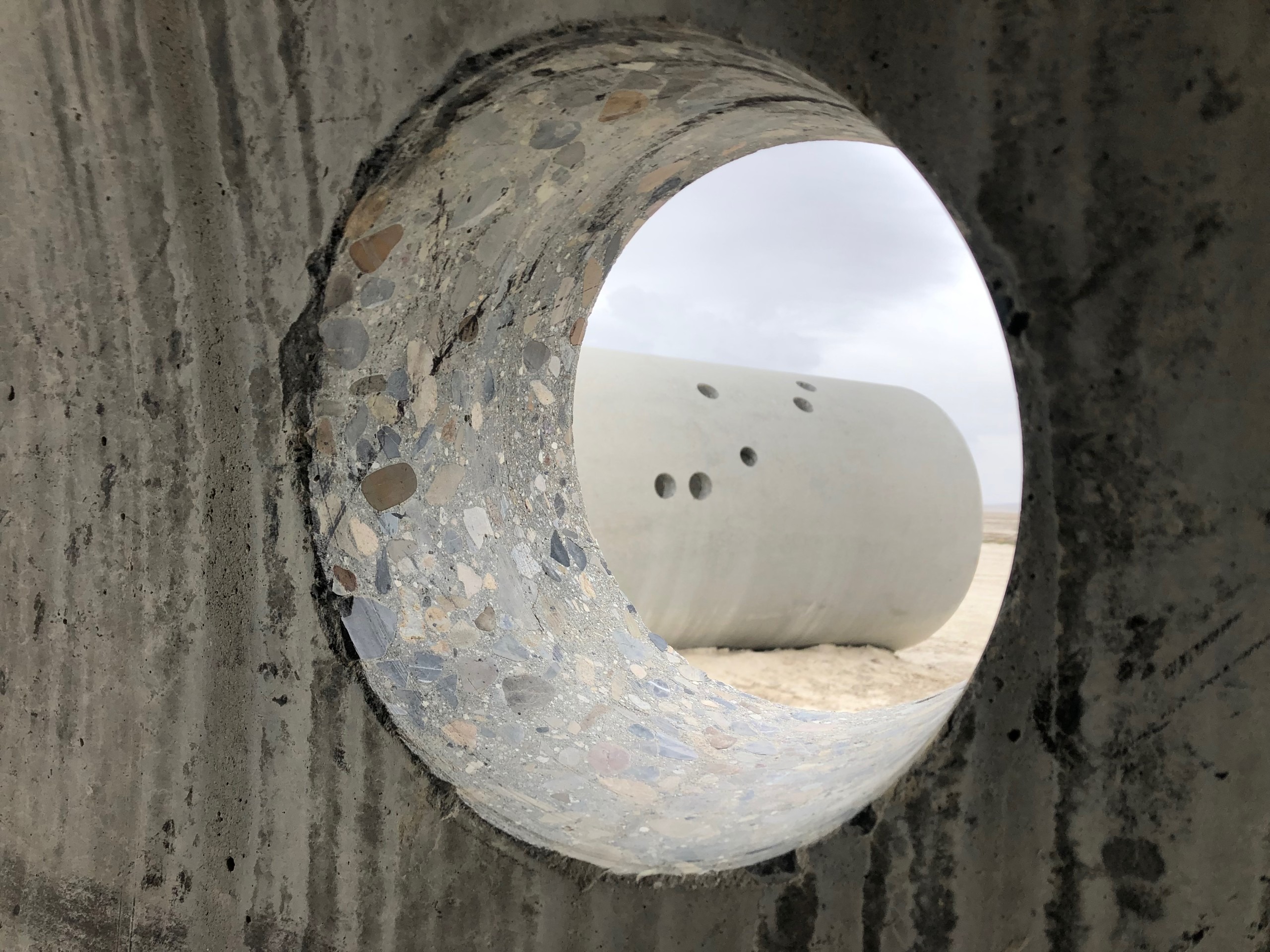 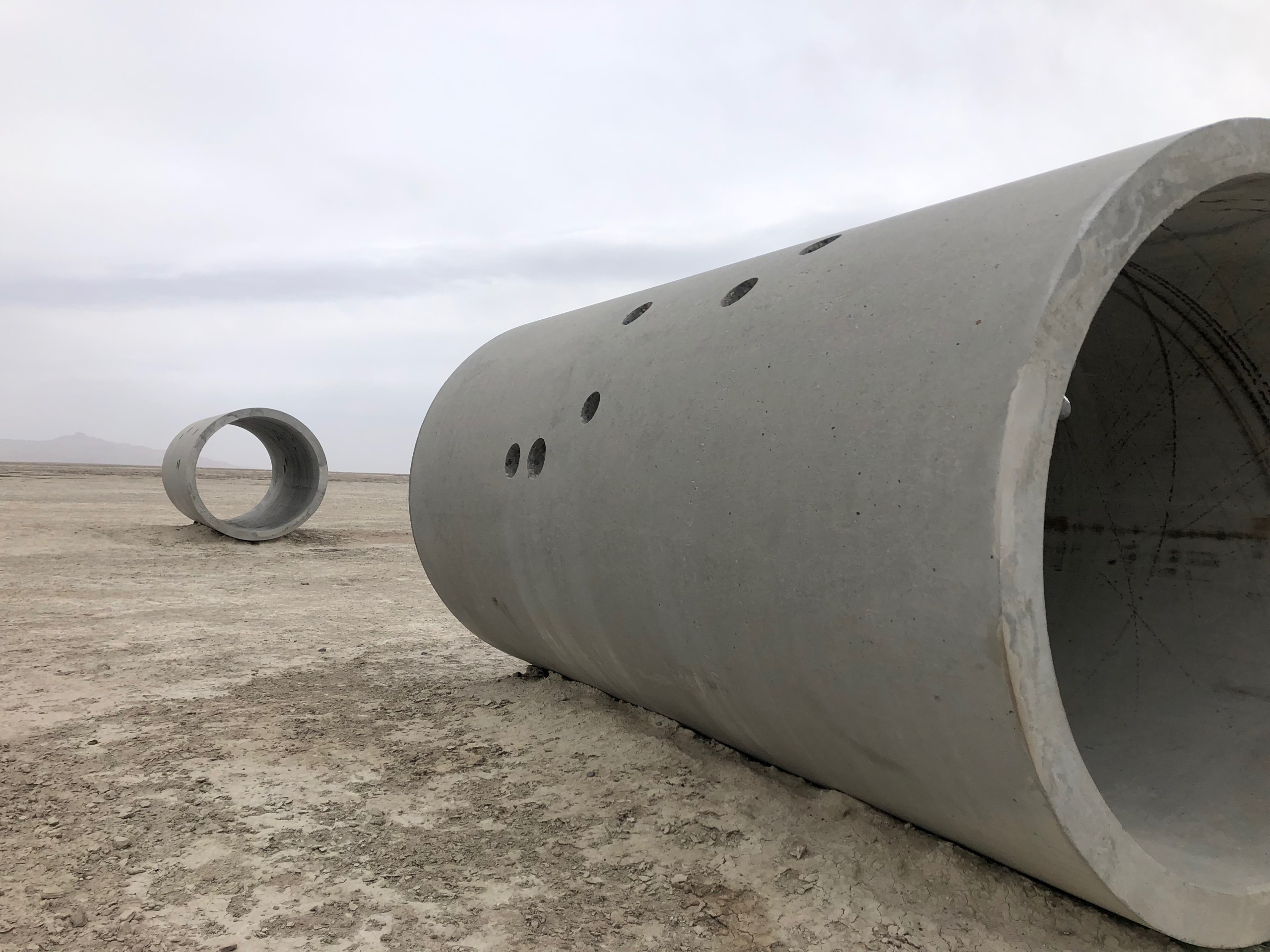 . . .
I took shelter in one of the tunnels from the buffeting wind and dust. It was comforting in a strange way crouching in the tunnel gazing out into the hazy surrounding land and listening to the wind’s eerie howl through the tunnel opening on both ends, and through the constellation holes. The grayness of the atmosphere matching the grayness of the concrete tubes.

Sensing that the sun would be behind clouds the rest of that day, and hoping the weather might be better elsewhere, I headed to Spiral Jetty on the other side of the Great Salt Lake.
. . . 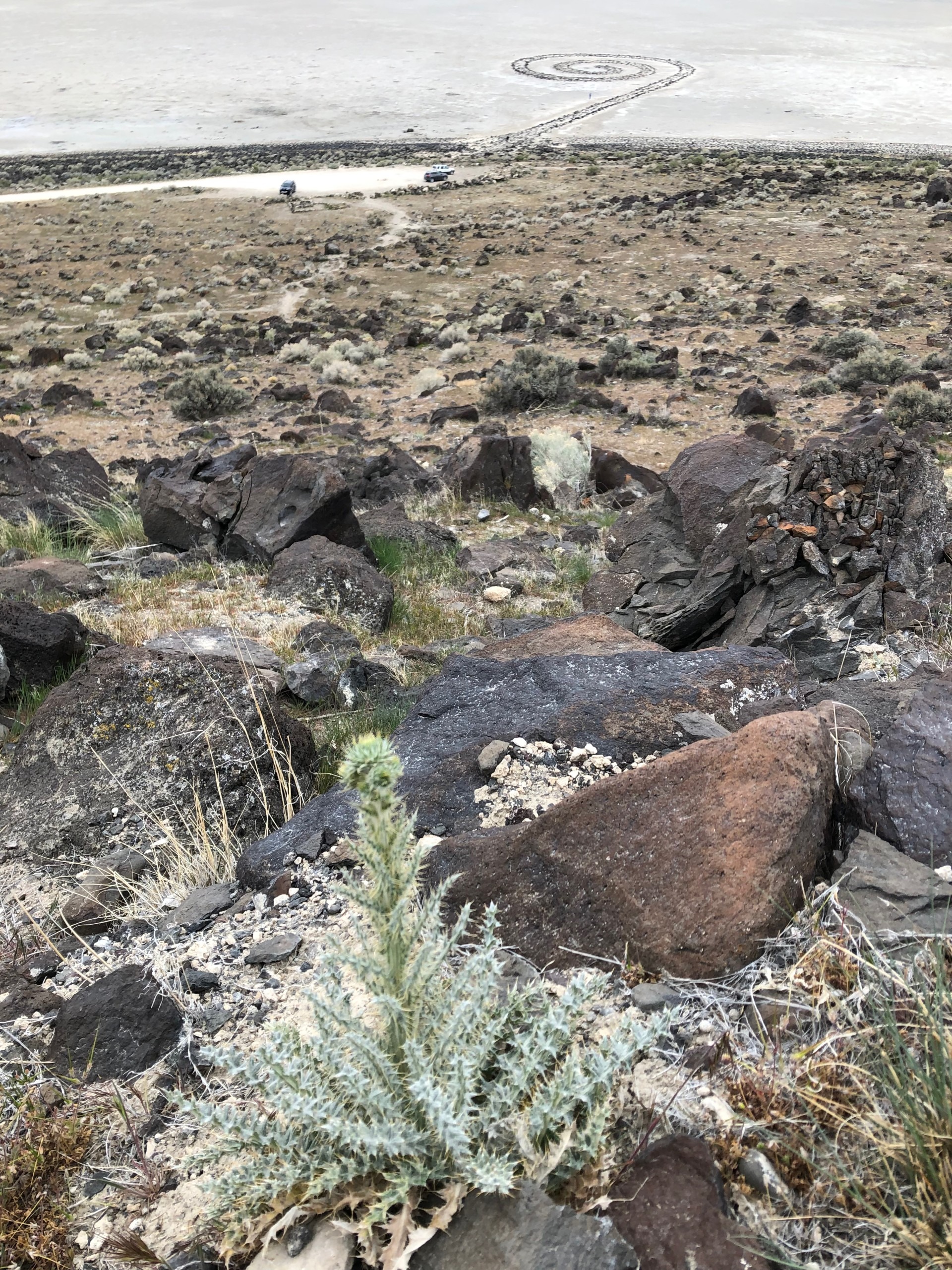 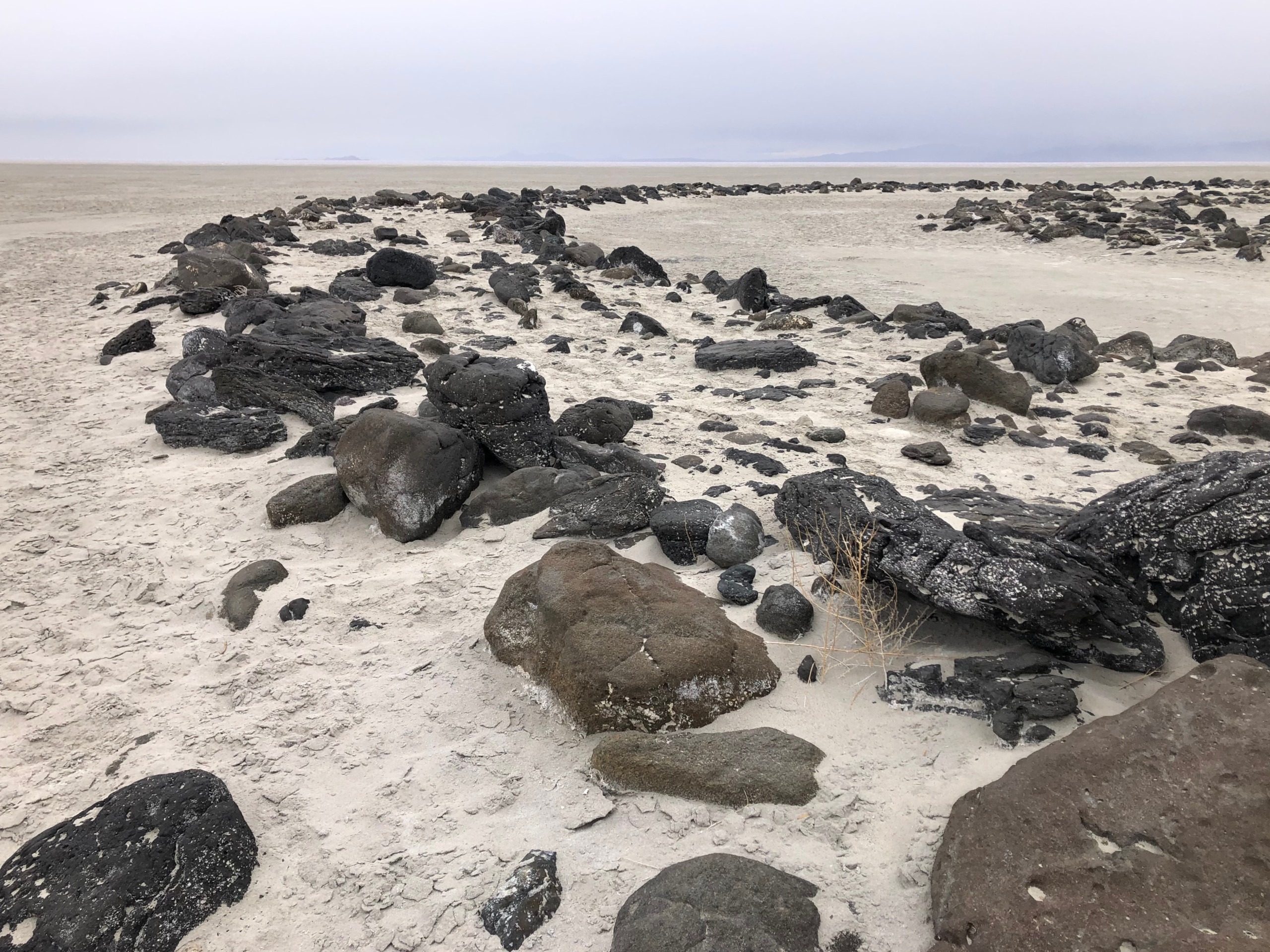 . . .
An approximate three hours drive later, still cold and overcast but at least with much calmer dust-free wind, I walked along the whole Spiral Jetty and explored the surrounding basalt rock-strewn landscape – the same basalt rocks and boulders that Robert Smithson collected to build the Spiral Jetty.
. . .

. . .
Spiral Jetty feels solid enough to survive a millennia, and future people might find the spiral’s faint trace and ponder, just as we now do with ruins such as Stonehenge.
. . . 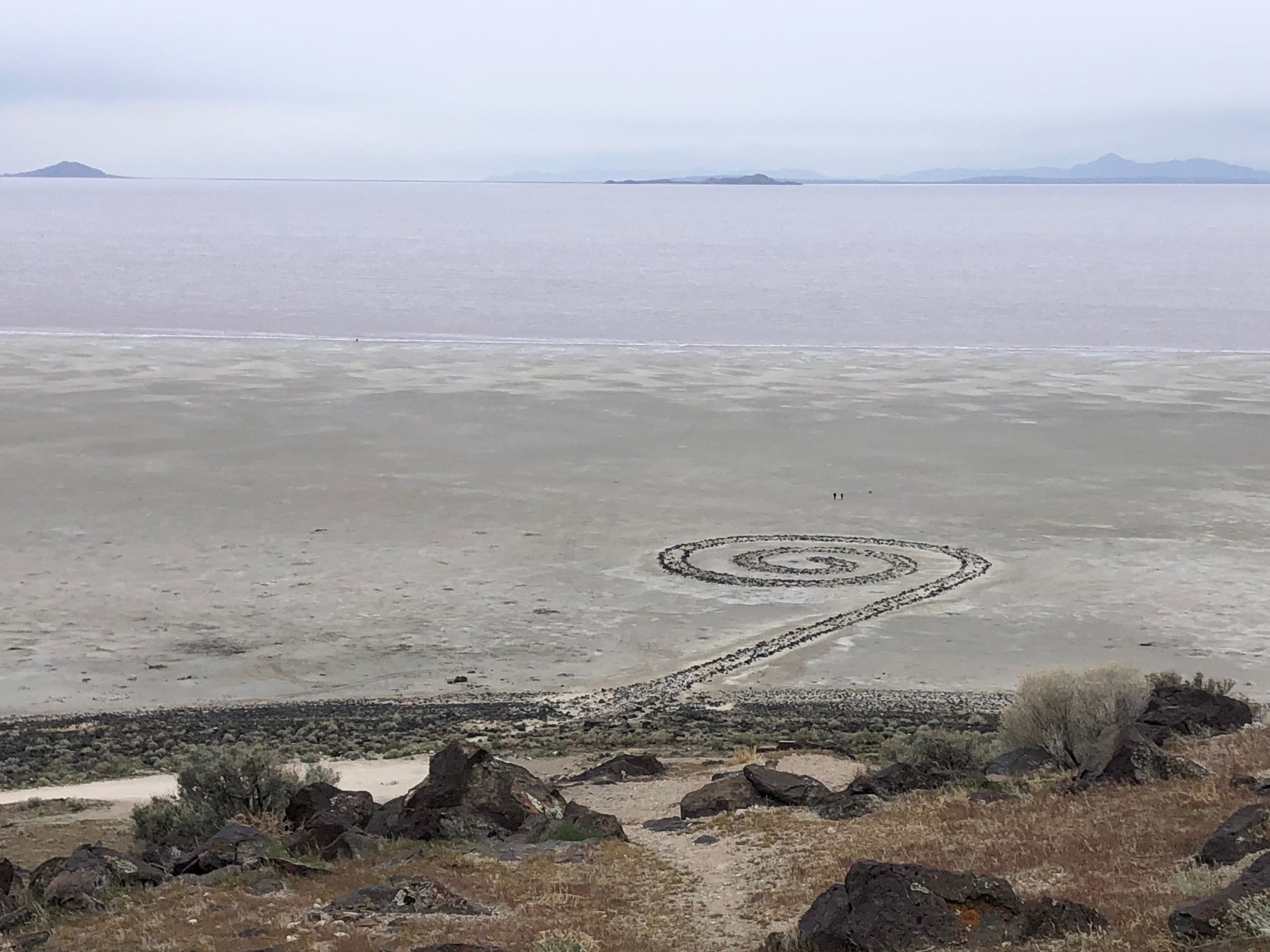 . . .
The next day the sun was shining, with a few small clouds and very little wind – perfect for another trip to the Sun Tunnels. And what a difference sunlight makes.

The piece is about the Sun – and by virtue of the space it occupies, the rest of the sky and all its inhabitants. And where the sky meets the Earth in 360 degrees of the horizon, and how a person, a bubble of consciousness midst this whole composition, might experience that unaccountable vastness during different times of the day, in the ever-changing light conditions, through the cyclic seasons. . . and experience it scientifically, culturally and mythologically.
. . . 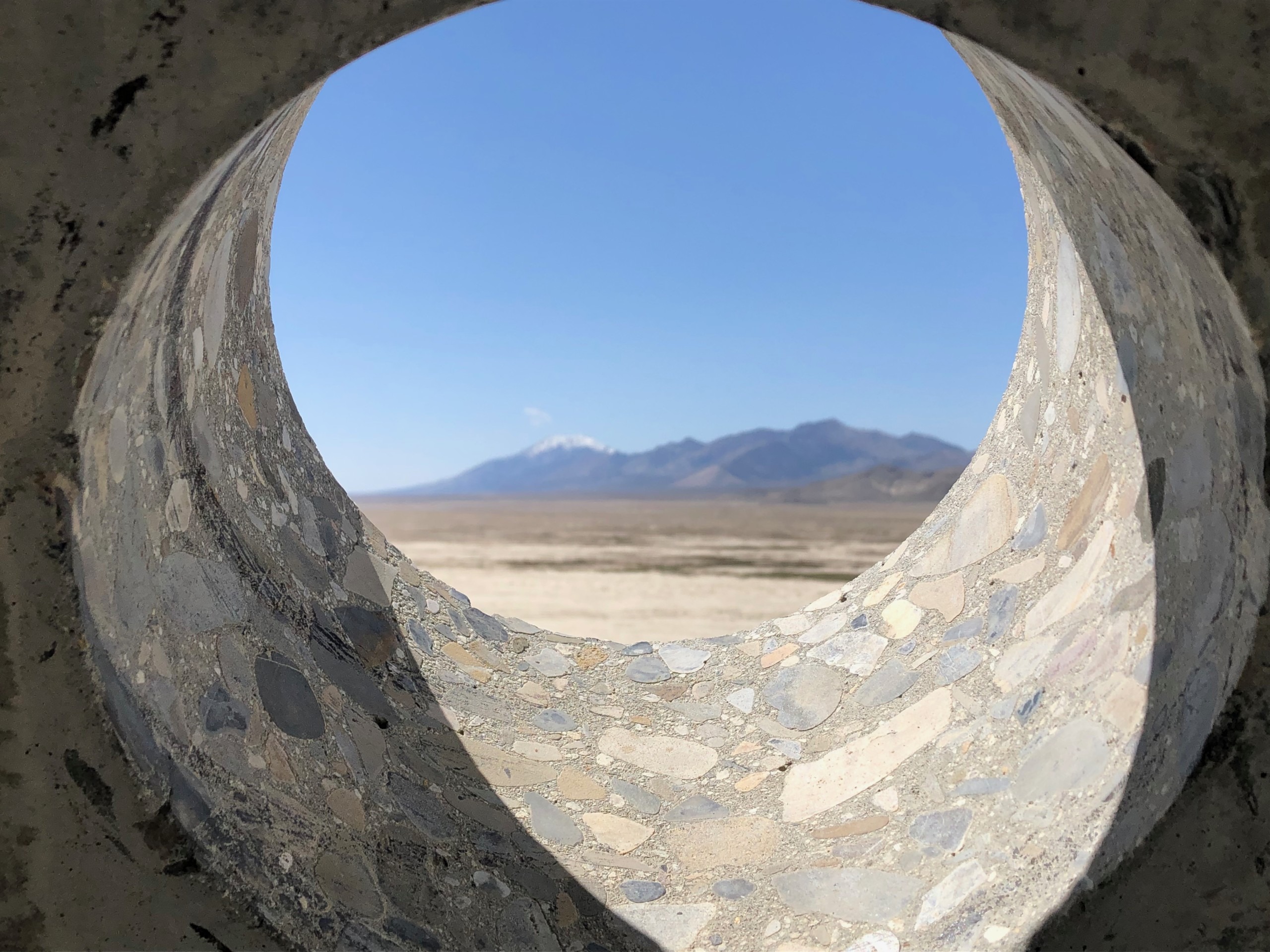 . . .
Often we hear experts explaining the vast expanse of time or scale of space by using more relatable human size stuff, like if Earth’s history is condensed into 24 hours starting at 12 am, then the appearance of humans would be around 11:58 pm. . . Or if the Sun was the size of a basketball, then Earth would be a 1/32 of an inch sized bead 83 ft. distant from the basketball.
. . . 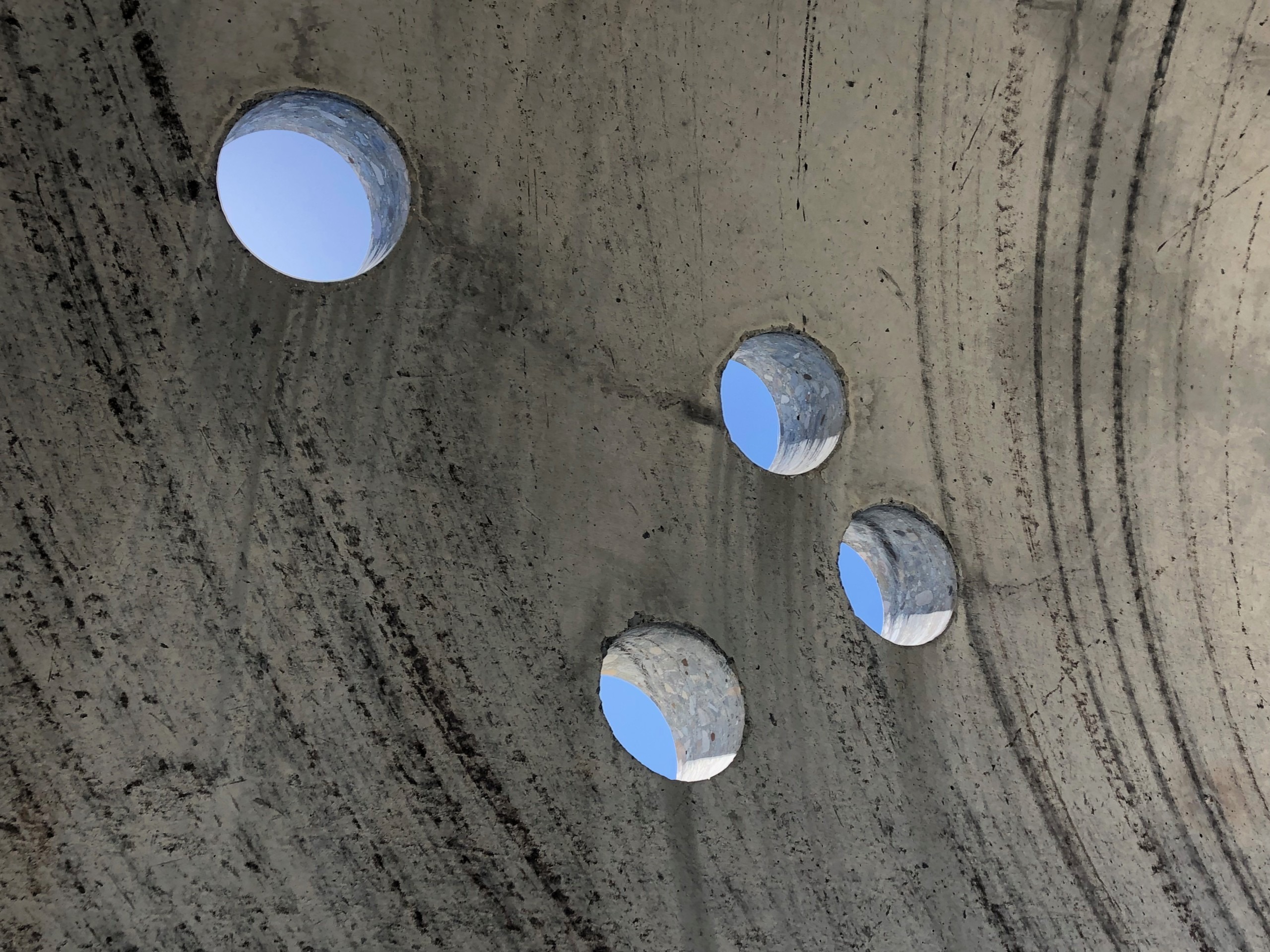 . . .
The Sun Tunnels plays with this idea in this high desert plain, turning these concrete tubes into lenses, framing the faraway view of the mountains, horizons, the sky – giving that bubble of consciousness some reference point, some framework, some method to process what otherwise would be too immense and unwieldy to encounter directly. Like when light enters the eye’s cornea, moderated by the pupil, to the lens focusing that light and sends it to the retina where the rod and cone photoreceptors convert that light into electrical signals for the brain to process.
. . . 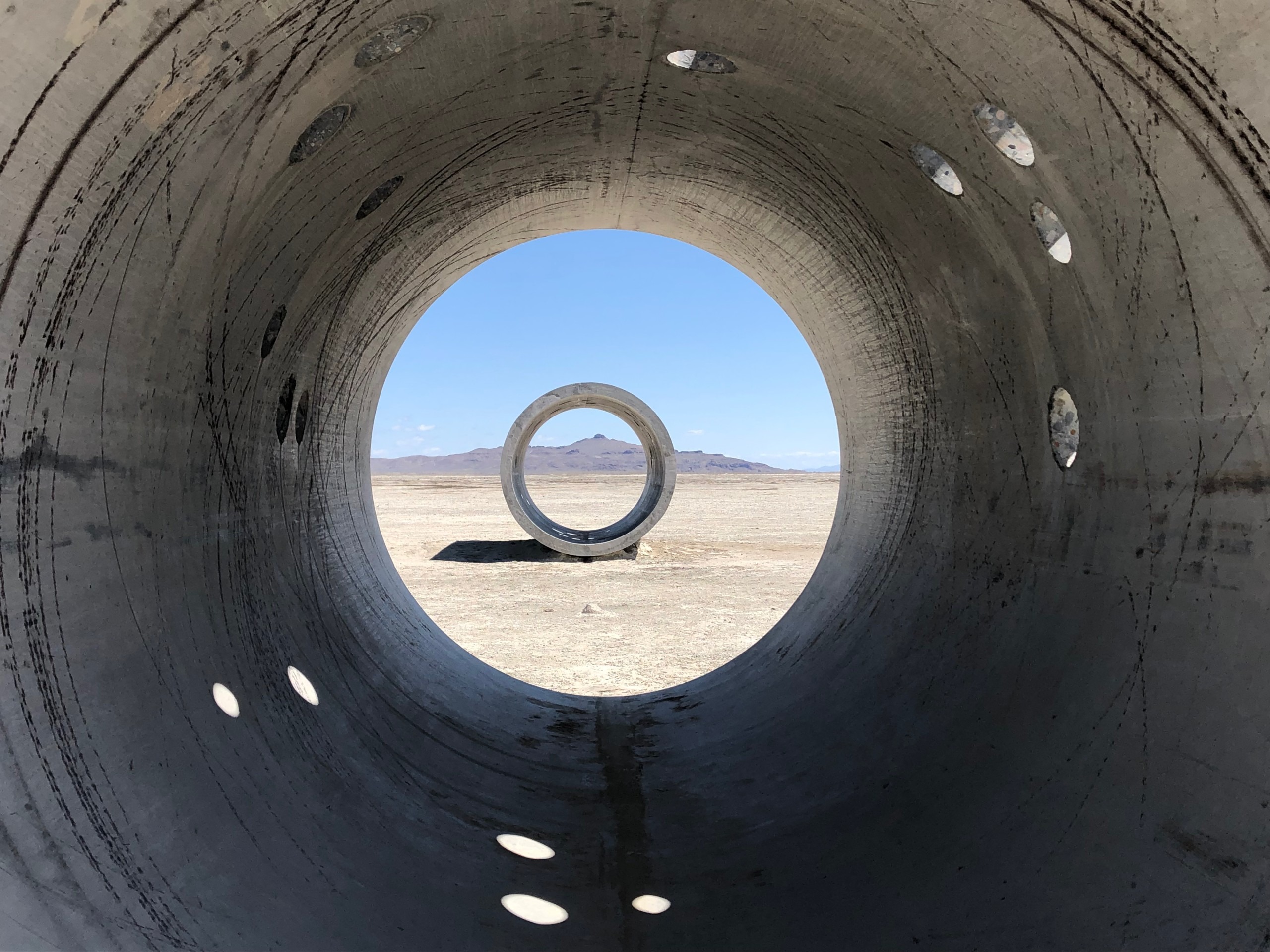 . . .
So this tiny human is processing this immensity through a configuration of these concrete tubes thought up by another human. These tubes, simplest of forms, like the tubes from paper towel rolls that kids playfully look through, imagining – are now still looking, pondering the all-encompassing light moderated through the ends of concrete tunnels and openings of the constellations. Pretty cool moment.
. . . 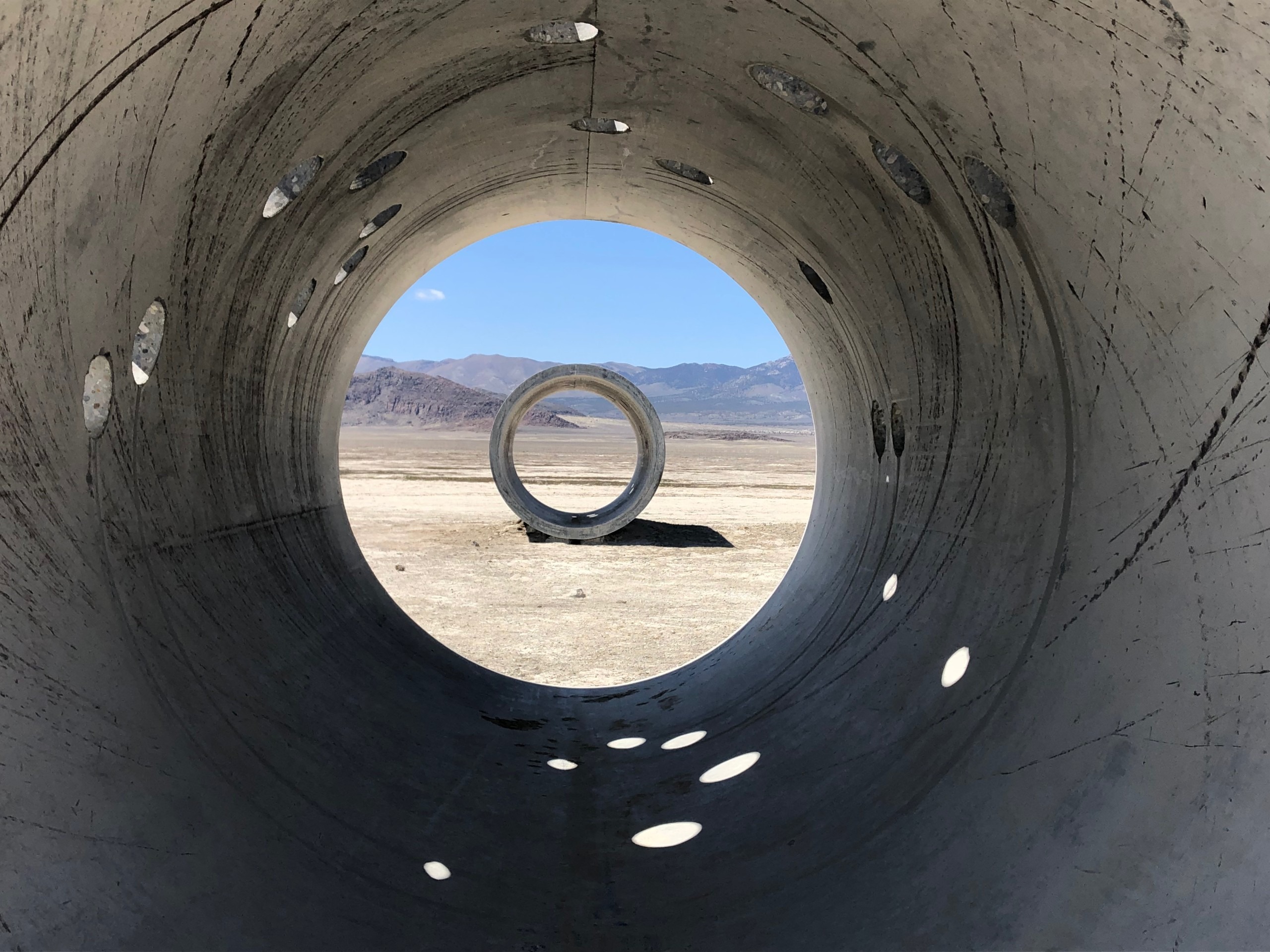 . . .
A neat detail is when the sunlight streams through those pattern of holes on top of the tunnels casting spots of light onto the floor, and entering the tunnels is like walking through that constellations in the sky, poetically inverting day into night and turning sunlight into many starry lights.

In an article for Art Forum in 1977, the year after she finished Sun Tunnels, Holt describes fully her intentionality, and the detailed process, from conception to completion of the Sun Tunnels – artforum.com/print/197704/sun-tunnels-35992 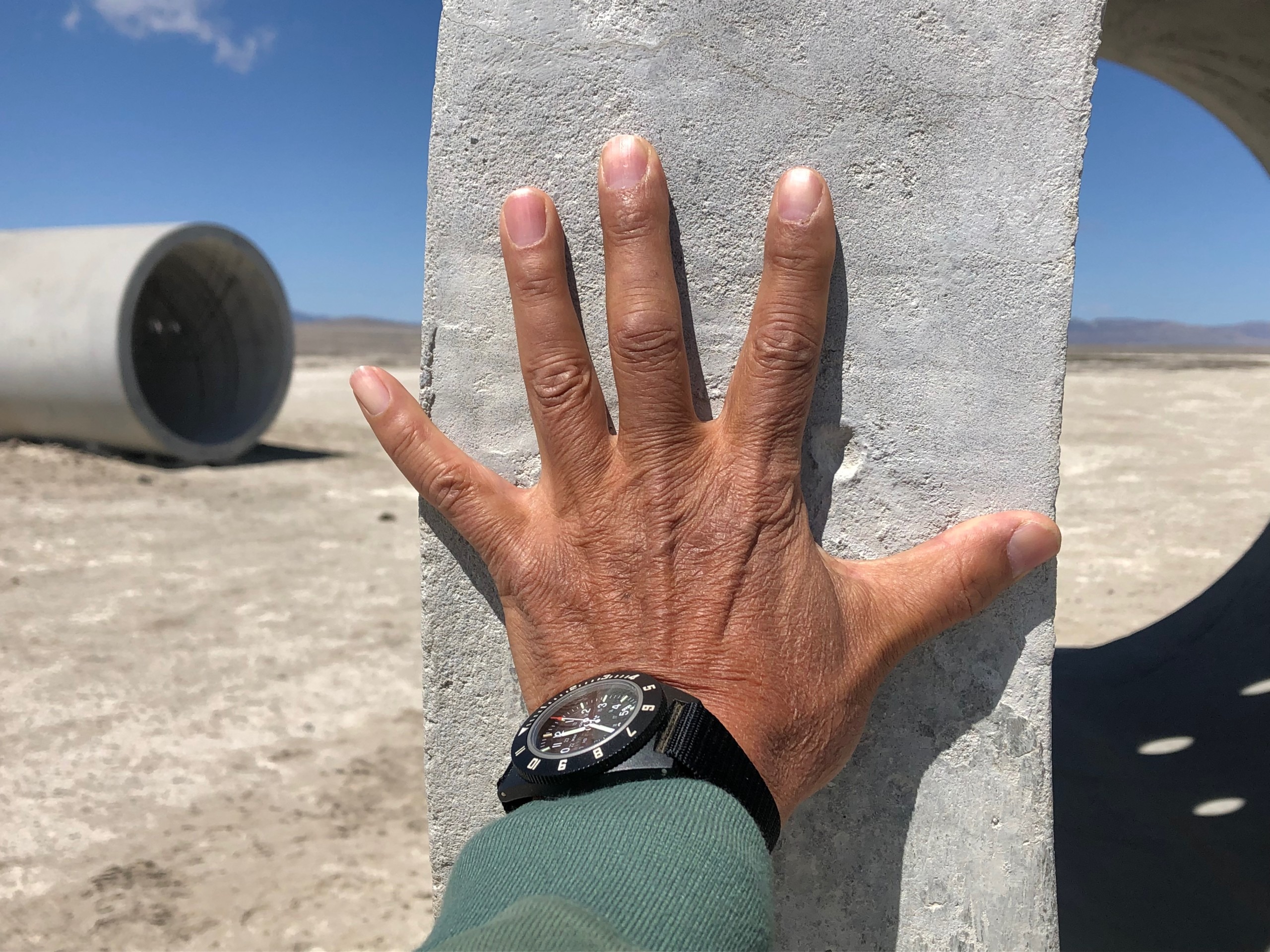