Enlightened Man – Disintegration of the Material Elements of Reality

Smack dab in the middle of the sweltering dog days of the Florida summer I began an ambitious new piece. A full scale standing human figure.  I had been planning to tackle this idea for some time and finally got the time and materials to do it. As a starting point I used a piece I made in 2013, Man Turning into a Tree II. Cutting off the “tree limbs” and resizing the body proportions, it made a perfect armature to fill in with a variety of interesting steel parts that I had been diligently gathering from the transmission shop.

The pose is dramatic. The figure stands naked, pulling open his chest with his hands. I’m imagining a beam of light emanating from the chest cavity as though he’s revealing the life force from within his soul.

Several key factors have to be right in order for the piece to work. The body proportions have to be anatomically correct. The objects used to fill in the body have to flow in a consistent visual  language so as to not distract the viewer but work as one cohesive whole, and the face has to convey emotion and not appear robotic.

The thin ⅛” diameter rod that the original sculpture was made of took on the appearance of a circulatory or nervous system as I filled in the body with elements that echoed muscles and bone. He looks multidimensional as though we are seeing inside his body at the various tissues.

The head took five days to create, going through several major permutations before arriving at the final shape. I began with a skull-like armature and slowly added eyes, eyelids, brow, nose, cheekbones, ears and other details, all the while striving to make the face appear human. Another critical element is the hands.  As they pull the chest apart, they must look like they are applying force and in proper proportion to the rest of the figure.

As the man neared completion I set a halogen work light in the chest to see how light emanating from the cavity would look. The effect was better than I expected. It took the piece to another level. I called Rick Singleton, a lighting artist from Five Deuces who visited my studio a few months back, to ask his advice about what type of light would work best. He’s coming to see the piece tomorrow.

After meeting with Rick, I decided to build the light as an integral element within the chest cavity. I gave it the appearance of being an abstract heart made of the same materials as the rest of the sculpture. 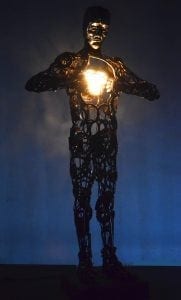