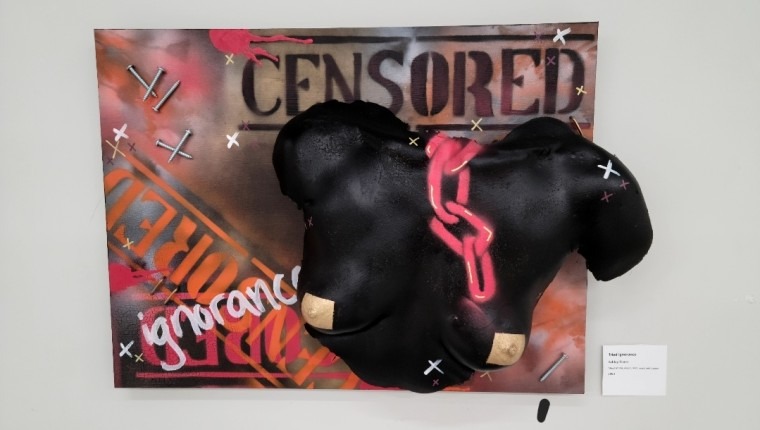 I recently made an Artwork because I was upset.

noun
1. the suppression or prohibition of any parts of media, news, books, art, films, etc. that are considered obscene, politically unacceptable, or a threat to security.
“the regulation imposes censorship on all media”

Censorship is one of the most common violations to Artistic freedoms happening within the Art world. With social media, I personally have a love/hate relationship with it because of its censorship issues. On multiple occasions, I have has works of art taken down off of the platforms because they “violated community guidelines.” The photos were never breaking any of the community guideline rules that they set in place, and yet, they would be removed because of the platforms’ algorithm. It does not happen often luckily, but recently I had one of my artworks removed, the image showed a close-up of goosebumps I was able to capture from skin on one of my Artworks.
The post was taken down. I guess I should take it as a compliment, since the system thought it looked exactly like skin (even though the piece itself was made from a black resin and metal), but it frustrates me because I worked so hard on the piece.

With my frustration, I decided to create a different piece titled: Tried Ignorance.

The work highlights the nipples of a chain-painted breast and neckline showing over the “CENSORED” cautions and metal screws along the back panel. The piece in currently on display at the Warehouse Arts District: HUMAN DESCRETION ADVISED Exhibition. It will be up from February 12th until February 28th, 2022.

Go check it out if you get a chance.