1. the moving of something from its place position.

2. the occupation by a submerged body or part of a body of a volume which would otherwise be occupied by a fluid.

Recently, images of various environmental disasters have reminded me of the photographs I recall seeing over the years of the Dust Bowl period in America. Occurring during the 1930’s, on top of the Depression, it was a manmade disaster in its own right. It resulted in major economic, environmental and migration shifts which were memorably interpreted by Steinbeck in his book, GRAPES OF WRATH. Many of the photographs and descriptions of those years showed families traveling by foot carrying what belongings they could. Cars and pickup trucks were seen piled high not only with personal belongings but with mattresses, chests of drawers, tables and chairs.

During that time some 2.5 million people migrated from the states affected by this disaster. Those states included Texas, New Mexico, Colorado, Nebraska, Kansas and Oklahoma; the latter alone lost 440,000 people to displacement.* What was seen then is happening today in areas all over the world due to climate change and our slow response to mitigating its effects. It is predicted that within the US, 13 million people could be displaced within the next 80 years due to sea level rise.** The whole of the east coast will be affected but Florida, having the longest coastline of US states after Alaska***, is in the forefront of the rising sea level. It is already degrading both Florida’s coastline and fresh water aquifers.

Displacement, it appears, is in our future. We will be moving our furniture to locations we hadn’t planned on for a long time to come. My use of the chair in new work is an apt metaphor for this broad narrative of anticipated, if undesired, change. It is relatable precisely because it is an object that is part and parcel of our daily lives. And, it is portable; taking it with us and setting it down, wherever we may find ourselves, gives us a necessary sense of place, even if that place changes. 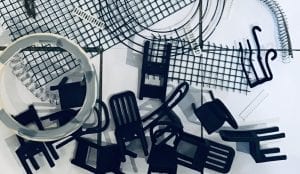