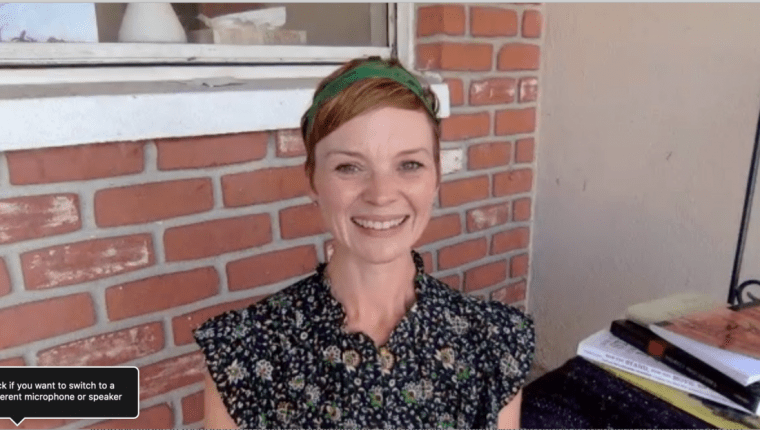 Juilliard-trained dancer Helen Hansen French, a St. Pete native, has seen all her performances canceled and is doing the
best she can to teach her students via Zoom

On Helen French’s small, covered front porch in St. Pete sits a 3-by-4-foot mat that she filched from her kids’ playroom and covered with packing tape. It is, effectively, her dance floor.

A professional dancer — and dance teacher — French has been forced to innovate in order to teach her students online. Giving instruction to individuals or groups via Zoom, she can demonstrate basic moves and positions on her little piece of dance real estate.

So Grande Allegros are out.

Obviously, all of French’s performances have been canceled. Because she maintains a schedule of teaching 11 classes a week for St. Petersburg College and Hillsborough Community College — as well as four private students — she continues to generate income. (She was also an adjunct teacher with the Gibbs High School arts magnet program, but that gig has been put on hold.) Her husband of 10 years, Jonathan French, is still employed and able to work out of their home. Her current standard of living is sustainable for the foreseeable future, she says, but, like most everyone else, not indefinitely.

With two sons — ages 7 and 3 — who are bursting with energy and in need of constant supervision, Helen French’s life is, to put it mildly, stressful. “I tell the boys, ‘Get out of that tree,’ 15 times an hour,” she says with a chuckle.

Helen is quick to allow that she has it much better than other artists amid the COVID-19 pandemic. During our hour-long interview, also over Zoom, she maintains a sunny demeanor, albeit mixed with moments of frustration, concern and sadness. “I’m quicker to anger, and quicker to feel guilty about getting angry,” she admits.

Dance is all about motion. And teaching dance is so tactile. How does someone instruct students over an online platform originally meant for business meetings?

In French’s case, with caution and lots of care. “It varies from student to student,” she explains. “Some of them need to move, others are dealing with the trauma and don’t want to move. I’m being as emphatic as I can be.

“I’m focusing on transferable skills. This morning, pre-warmup, I taught an exercise on how to help with strained eyes. It gives them another tool to work with. I can only give students [technique] corrections based upon what I can see [via the feed].”

She has pragmatic concerns as well. “The surfaces they’re dancing on aren’t generally safe or sustainable,” she laments. “I have students trying to learn on carpet, tile kitchen floors, in their bedroom holding on to their dresser, even on concrete. I don’t give any jumping [instruction]. It hurts my bones to even think of jumping on tile.”

(Industry standard dance floors are made of sprung wood covered with a surface called Marley, she explains.)

“I try not to throw a bunch of new stuff at them,” Helen continues. “Some of them, I can see in their faces that they’re tired. They’ll say, ‘I can’t remember anything of what you just said.’ That’s anxiety.”

French is particularly concerned about two of her former Gibbs students. “They’re young African American women, a minority within a minority,” she says. “They’re about to graduate high school. Both of them are beautiful dancers and have been accepted into a summer training program in Jacksonville, which could lead to a job. They have extremely bright futures, but I worry that this type of [arts shutdown] scenario is lasting just long enough to set them back or discourage them — just long enough that they never make it out of the starting blocks. It makes me want to tear my hair out.”

French, 41, graduated from the Pinellas County Center for the Arts at Gibbs High program, then went off to The Juilliard School in New York City to further study dance. She focused on the elegant and powerful Graham Technique, named after the legendary modern dance pioneer Martha Graham.

After Juilliard, she joined the Buglisi Dance Theater in New York — just a few weeks before 9/11. Nevertheless, the company kept her busy dancing professionally for 22 to 38 weeks a year on contract. French also picked up teaching jobs. She made a living, had an apartment in the Inwood section of Manhattan. That work pace maintained until around 2007 when it tapered off. By then, she was only getting 10 weeks of annual guaranteed work from Buglisi.

French moved back to St. Pete and traveled to New York when jobs arose. She’d met Jonathan during a few trips home. “I parked my U-Haul and went out for ice cream with him,” she says fondly. “That was June 11th, 2009. We got engaged on July 5th and married on March 6th, 2010.”

The last time the couple went out, they had a lovely dinner at Rococo Steak for their 10th anniversary.

After fully settling in St. Pete, French realized that she “wanted to create something in dance here that was sustainable,” she says. “We have a robust and vibrant dance community, especially in St. Pete, but in Tampa and Sarasota as well. I wanted to make a community, but the dance company structure, it really doesn’t work that way here.”

With fellow dancer Lauren Slone, a St. Pete native who lives in New York, French formed BEACON Contemporary Dance, an artist-in-residence group at the Palladium Theater that does a major annual performance at the venue.

April 3 was scheduled to be year five of BEACON and dancers had been rehearsing for months. That performance was postponed. French is also part of a dance group called Open Space Collective that’s affiliated with the Museum of Fine Arts in St. Petersburg. She and four cohorts started in January choreographing original pieces for a series of performances that were to last through May. They had six rehearsals and did two shows on the MFA stage before shutting the project down.

Now that’s something I’d love to see — but won’t for a while.

If you’d like to see Helen French in performance, she kindly shared this video: