Classic Skills
That Were Once Essential

The Arts Coast Journal asked a range of artists what essential skills they learned when they were starting out – skills that are now being forgotten as digital technology steps forward in all kinds of art.

We also asked whether those early ‘analog’ skills still inform these artists’ work today, even as they use digital tools.

As an audio editor, I learned editing on reel-to-reel. Physically cutting recordings with razor blades and creating new transitions held together by not-so-sticky tape – and watching reels of audio roll by with hundreds of visible seams marking every edit. Mixing involved cueing up DATs, minidisc, CDs and other reel-to-reels, recording as you triggered sources one by one and hopefully at the right time – otherwise, stopping and rewinding everything to try again.

And even though I’ve used digital editing software in most of my career, the way I edit is still shaped by thousands of hours spent slicing tape with a razor – carefully stretching a small black strip of sentences across your thigh and checking every new transition to make sure it’s right, before that piece of tape – and those words – forever join the tangle in the trash can.

The stories we received are fascinating and surprising. Many thanks to the artists who shared their experience with techniques and skills that are no longer being taught.

If you’ve got a story to share, you can email s.cowley@arts-src-wp.sptechteam.net.

I received my Master’s in musical composition from Northern Illinois University in 1977. NIU had one of the few electronic music studios in the country, due primarily to the presence of several avant garde composers/musicians on the faculty. As a composition student, I was granted access to the studio and had the opportunity to learn how to program these ground-breaking instruments.

Early synthesizers needed programming from the ground up. Walk up to the synthesizer and press a key? Silence! To get sound, you had to physically patch it together, with patch cords. The term “patch” is still used to describe a synth sound. (But only by the intrinsically hip, as in this example, “That piano patch sounds like the real thing, man!”)

Now you can go back and change elements of amplitude and timbre to the programmer’s whim. If desired, ring modulators, frequency and amplitude modulators, or white noise generators can be patched into the chain to further modify the sound.

. . .
Back in the day we used to ask people for directions and write down what they said using vague distance estimates and sketchy landmarks to guide us. “Turn right at the rock that looks like a bear, and then go 5-10 miles until you hit the dogleg…”

The intrepid driver would also depend on paper maps to navigate. It was quite a skillful juggling act to drive, look at a map and negotiate the correct turns and exits while drinking coffee, eating a sandwich, and shifting a manual transmission.
. . .

. . .
Although every sculpture starts with an idea and the desire to realize that idea in three dimensions, the methods available for achieving the final form have changed radically in the past two decades. As some members of the older generation resist learning to use computers, so do older artists resist learning how to use modern tools and techniques. I can say that being old myself! Venerable senior members of the artistic community, it’s time to navigate your way to art production of the future. 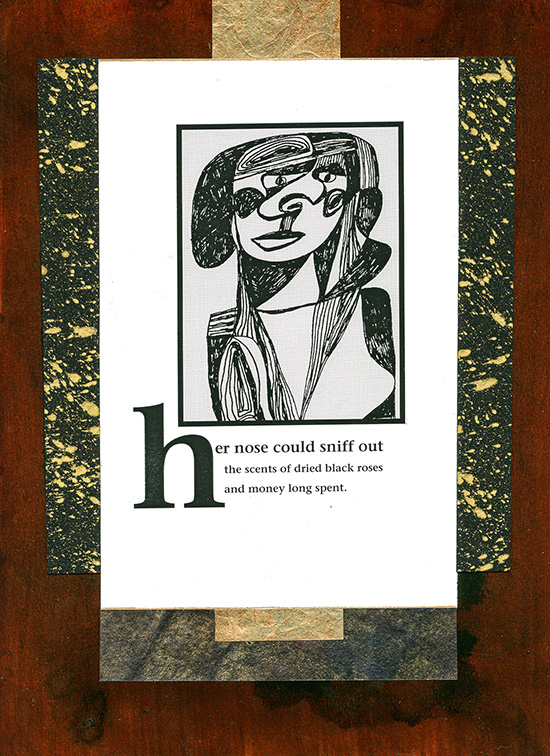 . . .
Amy and I were either the first (or at least one of the first) design studios in Philly to get an Apple Computer with a black & white laser printer ($5K in in 1986 dollars).

My wife was trained as a traditional illustrator and my degree was in architecture (but I mostly did metal sculpture and jewelry and printmaking while at RISD).

Although neither of us had any computer tech training or were especially good at math, it opened a real income stream for us that lasted decades.

About 2 months ago, I found a series of haiku broadsheets that I did over 30 years ago on the laser printer and made them into illuminated poem pages, like the one above.

That which goes round, comes round!

. . .
For a long time one of the most stressful things I’d ever done was cut negative for my student 16mm short in 1985. Let me just say I’m glad to be more a writer/director/producer (even a cleaner-of-ovens-with-a-squirrel-hair-paintbrush if necessary) than an analogue film editor.

What drawing competency I have has its anchor in learning about perspective in a junior high art class – pencil, paper, ruler and protractor were the tools, but also developing an eye for proportion and distance.

Age has loosened perfectionism from sketching (yay), and these days I get to both-and with pencil and paper and the iPad (using Brushes or Procreate) for planning a sculpture, say, or drafting storyboards.

. . .
I have found that learning photography through the darkroom process has been so very beneficial to my seeing and observation of light. My students who have never been in the darkroom or even shot film seem to have a harder time understanding light on all levels.

Although I am so grateful for digital photography, I miss the
“A-ha” moments of the darkroom. The patience and excitement you feel at the same time waiting for film to dry is lost sitting at the computer.

. . .
Digital has made my workload much heavier and expectations are that I can turn client work around instantly. People expect so much more now. Often, they want more images and are less concerned about the quality.

As an artist, I feel photography is sometimes valued less now since it is so ubiquitous. People say, “I can do that.” So, I find myself exploring other options in art utilizing photography as the base. So, it pushes me to explore, fail, try again and get stressed out, then happy and sometimes I find a new lane in photography I really love.

It’s not much different than when the 19th Century artists thought photography would be the death of painting. It wasn’t, of course – painters embraced it as a tool and a whole new generation of artists was born.

. . .
I learned how to make films on a Bolex 16MM camera. My shooting ration was 2 or 3:1. This means for every shot I needed, I was allowed to shoot 2 or 3 times. Today, since digital is virtually free, I see filmmakers using a ratio of 10 to 20:1 and even more. They blast their poor editors with hundreds if not thousands of shots to get one usable shot.

. . .
Because film cameras had no digital screen, you had to know exposures, f-stop and shutter speed combinations and hope for the best. Sometimes this provided happy accidents when you finally saw the film after processing, which could take a week or more. There was a lot less waste and a lot more planning.

I am shocked to see how little of the basic mechanics of light are known to today’s filmmakers. I have met several “Film School” grads who have no idea how to manipulate this knowledge to obtain the effect they seek.

That said, the wonders of non-linear editing and the bells and whistles that are served up by current technology are amazing. The secret is to not get too bogged down in the technology – and tell the story.

. . .
As a composer, I welcome new technology that helps me complete the steps from A to Z in composing, as well as music production, where I can deliver a finished audio product.

Back in the early days of laptops, I worked in live performance environments integrating computers and acoustic instruments. That often required that I write code, as well as setting up sound systems. To be honest, it was too much work and I found that I was always fighting the static nature of processing live sound through a computer.

I currently teach Sibelius and Pro Tools in the MIRA (Music Industry/Recording Arts) program at St. Petersburg College and encourage students to create music while utilizing technology. It’s a balancing act of creativity vs. technology as one can be overwhelmed by ever-changing innovations in technology and the inherent learning curve. On the hand, many new creative possibilities are available with the assistance of technology for composing and music production.

Valuable “old school” skills for composers and arrangers included an understanding of how combined instruments sound, the ranges of the instruments, their timbre or sound quality in those ranges, as well as their facility in differing ranges. That knowledge is only acquired through study and listening.

The only new technology is digital scans of my work used to create mass-produced merch – but the art process itself has stayed very traditional/analog.