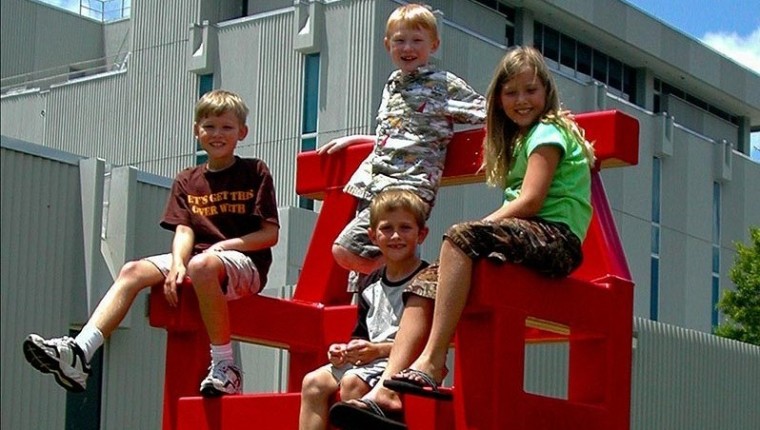 Public artist Douglas Kornfeld tells the fascinating tale of how he created vibrant public artworks in New Orleans that became symbols of the city, part of parades – and will hopefully save lives if a major storm hits.

He talks with Barbara St. Clair about what it truly means to be an artist – and what it means to make work on a monumental scale, along with the logistics of massive installations. He shares how he found his way to large-scale public sculpture and explains how figuring out Photoshop at a time when people barely knew about it revved up his career.

“A lot of public art is selected to decorate. I choose not to do that. . .  You have a huge opportunity to communicate with people who may never, ever go into a museum.

“For me, public art is a message in a bottle. We do it and we throw it out there into the world – and it will be here long after I’m gone. It’s made out of steel. If it’s even reasonably protected, it might be here in a hundred years. So what are these people in a hundred years going to think? ‘What did they think was important a hundred years ago when they gave their treasure to an artist to make a piece of art?’

“I want people to think about what we were doing with ourselves and our ideas – what we thought was important.”
. . .

. . .
“I taught figure drawing for many, many years. And I tried to teach like my teacher Bill taught me. I would stand up and say, ‘We’re not here to make pictures of naked people. That’s what the internet is for. What we’re here to do is look at things and show them in a new way and get people to think differently when they look.’

“When you show somebody something that they already know, that doesn’t change them. So Bill taught us to look at a figure – a man or a woman or an object or whatever we were drawing – and change it, make it ours, make it what do I see as an artist?”
. . .

. . .
“I don’t have children. These sculptures are what will remain of me when I’m gone, and I’m thrilled and honored and excited and delighted. It takes forever. It’s very involved, but it’s worth it.”
. .

. . .
On his New Orleans public art project, an amazing example of public art and social good.

“We all remember Katrina, terrible tragedy. I think 3000 people died in New Orleans because they couldn’t get out of the city. They were stuck there.

“And when the waters receded, the city said, we’re not letting this happen again. And a group of people got together, just some kids, they were like 20 years old and they printed up these signs and put them in 17 locations in New Orleans, saying, this is where you come. If you need a ride out of town when the mayor calls for mandatory evacuation, we will have buses here waiting for you.

“Well, these signs, nobody saw them, but their intentions were great. The whole thing was a great idea. So they wrote grants and they got enough money to have a competition for a sculpture that would be an icon that would be placed in 17 locations around New Orleans – that would give you the idea that this is where you come to get a ride.”
. . . . . .
“And my design was – well, we all take Ubers now, but once upon a time in the olden days, you stood on a sidewalk and you raised your hand to the air and you gestured and a cab would pull over. This universal gesture –  the universal way of hailing a cab. So I designed a figure that’s hailing a cab and in the middle of my presentation, I literally stood up and I assumed the pose of the sculptures for the jury. And I said, this is what you do when you want a ride.

“And a guy said, ‘Not New Orleans – that’s what you do when you want somebody to throw you beads at Mardi Gras!’

“So this figure is asking for a ride – and even more importantly, asking for beads at Mardi Gras. And a tradition has started to happen in the neighborhoods where these figures are located – they get dressed up, they get decorated.”
. . .

. . .
“I got the highest honor awarded to anyone in New Orleans. On the first Mardi Gras after these were installed, one of the crews who put together floats for Mardi Gras copied one of my statues in papier-maché – did a very nice job by the way – and mounted it at the front of their float, holding a cocktail.

“So there was my figure at the front of parade down Canal Street in New Orleans for Mardi Gras. And somebody told me, if you get lampooned in a float, that’s – it you’ve died and gone to heaven.

“And every year in hurricane season, they have drills and they set up tents at these sculptures and they publicize it and they have hundreds and hundreds of kids volunteering.”
. . .

. . .
“It was very important to me that I didn’t want to frighten someone – hurricanes are scary. What they do to New Orleans is terrifying. But I wanted people to see these sculptures and go, ‘Oh, that’s where I get a ride’  Not, ‘Oh my God, that means we’re all going to die!’ They’re not scary – they’re friendly.

“The mayor named them as official symbols of the city of New Orleans. And I also made a pin – a replica of the sculpture in a pin size, that you wear on your shirt. And I made 300 of them and we distributed them to all the bus drivers of new Orleans. We worked with the transit union and it was officially deemed part of their uniform.

“Never again will I have a project like that. It’s very unique. It’s part of the city. It’s everywhere you go. People send me pictures. They’re functional, they’re doing a job, but I also have this sense of the 17 sculptures really kind of connecting the community, because it’s the same sculpture in 17 different places.

“And then they raised more money and they’re now lit at night. And that was a very expensive thing to bring electricity and lighting to each one of these. But they got local businesses to donate and they’re part of the landscape.

“Hurricane force winds will not damage them or move them. They will be there forever.

“I hope to God they’re never used, but maybe they might be someday. And there’s not a lot of public art that saves lives.”

You can explore the work of Douglas Kornfeld here
. . .