Greg Byrd is an award-winning poet with a PhD in Literature, living in Clearwater and teaching at St. Pete College. 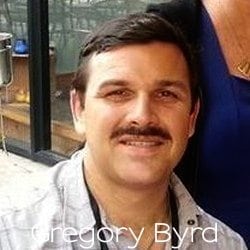 He’s a Fulbright Fellow in poetry and literature, winner of the Yellow Jacket Prize and recipient of a Creative Pinellas Professional Artist Grant.

Greg explains that, “My poetry is often connected to placeness and to mythology, but is rooted in concrete things and often in working class life. My poems just as often mention Winslow Homer or Bach as they do dovetail joints or rusted pocket knives.”

He talks with Barbara St. Clair about creating poems during cancer treatments and after his father’s death. Greg shares his experiences growing up in the Florida Keys and helping in his family’s appliance store, delivering washers and dryers before becoming the first person in his family to go to college.

Greg Byrd teaches at St. Pete College, where he works with many Iraq War veterans. He’s working right now on a novel set during World War I.

You can find out more about Greg’s work at  gregorybyrd.wordpress.com/salt-and-iron/.