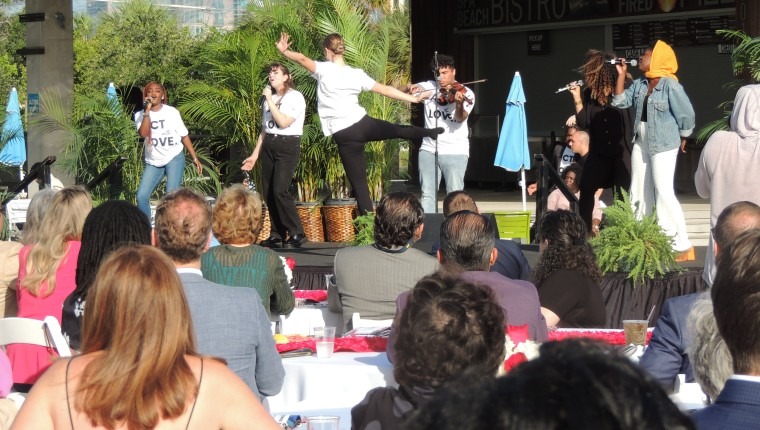 Words and Photos By Carlene Cobb
. . .

Deputy Mayor Owens emphasized the importance of the work ACT continues to do in the community. She also recognized the shared goal of cultivating a community in which a creative workforce can be successful and where creators can stay local to work and live, sustaining the rich, cultural heritage of this community. The goal to raise $50,000 on event day was exceeded. At this writing, funds of $140,000 were raised to support ACT and its mission.
. . .

Mission
Arts Conservatory for Teens is dedicated to
improving the lives of teens by providing arts education
to underserved public schools and communities.

. . .
Other vital goals were achieved, announced and applauded at the event. Performances by ACT students and alumni rocked the appreciative audience with music, singing, dancing, acting, spoken word and inspired energy.
. . .

ACT faculty trains students in what Harris calls a “multi-layered and trans-disciplinary” training that occurs before and after the regular school curriculum. It focuses on teaching students how they can be successful in the arts.

The extra-curricular opportunities for students accepted into ACT are described by Harris as “Masterclasses led by Grammy- and Oscar-winning professionals, and other renowned professional talent throughout the academic year.”
. . .

Highlights from the ACT Championship Breakfast, produced by GNK Studios
. . .
Gratitude was abundant at this event. Thanks were expressed to the event’s Co-Title Sponsors First Home Bank and Heritage Insurance and to all sponsors, donors, supporters, corporate partners, faculty, volunteers, students and their families. Participating middle and high school students, alumni and faculty were applauded for their performances and achievements. Supporters were recognized for their generosity and commitment to the value of providing these training opportunities for students in underserved communities and public schools in Pinellas County and across the Tampa Bay region.

“The most exciting part for me in doing these performances,” Harris says, “is that I get a chance to see how impactful it is for the students and alumni to perform for public audiences through their participation in this organization [ACT]. We have been a launching pad for them, giving them that first audience exposure.

“We definitely fill a gap for students to perform across the Tampa Bay area. These students were all super excited to perform — showcase their work in front of an audience. Even when they are in performing arts programs at school, there is not much opportunity to showcase their talent. Some schools don’t have a theatre or even a chorus. The district acknowledges the great need to fill that void.”
. . .

. . .
Hip hop and lyrical dances, strong vocalists and musical performances with young violinists and a full band, filled the stage with a fluid blending of performing arts disciplines. Numbers like Bobby McFerrin’s “Hold On” showcased two young violinists, vocalists and dancers, presenting a melodic chant of resilience and hope expressed through music, movement and song. The ’60s/’70s Love Medley mashup featured vocalists, Ar’yana, Ginger and Nasja singing The Four Tops’ “I’ll Be There,” which melted into The Beatles’ “Come Together” and finished with Stevie Wonder’s “Love’s in Need of Love Today.” Performances continued with pairings of actor and vocalist, dancer and vocalist, guitarist and vocalist. . .

Performances set the tone for scholarship recipient Shanoah Washington-Davis to share her touching testimonial. She began by describing herself as an abandoned child raised by her grandmother, noting some of the hardships she experienced at an early age.

When she was led to the ACT program, she said she began learning about her capabilities, responsibilities, productivity, creativity, and finally, confidence. She told the audience she gleaned those life skills from the encouraging group of like-minded creators who were like family. By the end of her story, she was no longer that abandoned child. Today, she is a thriving business owner who feels successful and thankful for all she learned and experienced by participating in the ACT program.
. . . 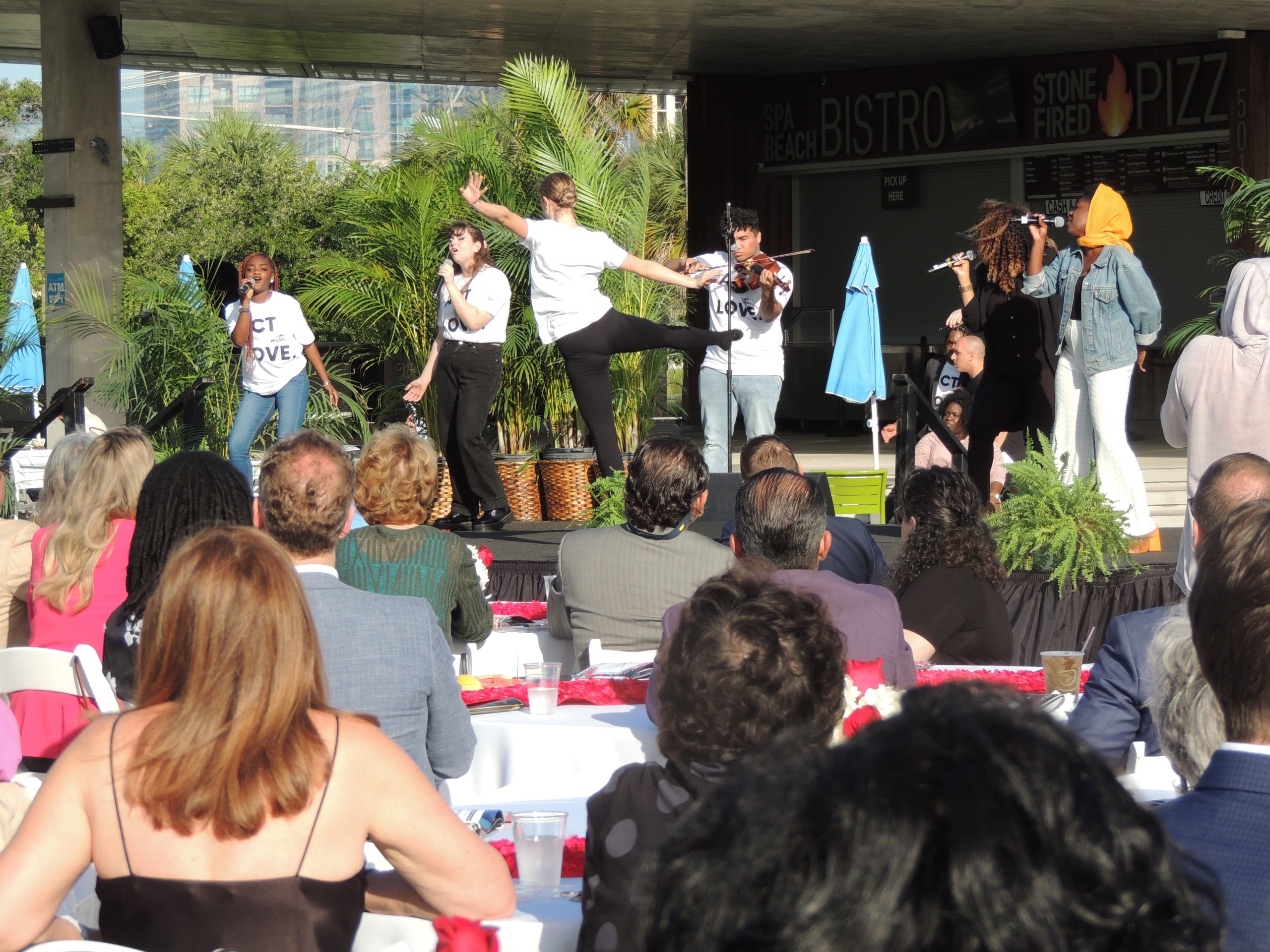 . . .
Next, Harris announced scholarships awarded from Aces Nation. Three of the five recipients were onstage for the presentation – Carlos Navedo, Brooke Reifinger and Shanoah Washington-Davis. “Each scholarship recipient,” explains Harris, “is awarded $1,000 every year starting in 8th grade and again every year through their college education… 90 percent of our students go into higher education after high school — college, trade school, some type of higher learning. We are proud of this partnership and the positive effects for the students.”
. . .

This is an opportunity to hone skills and techniques while preparing students for the full-time creative workforce. Three disciplines of study during The CWSI are Dance, Acting and Contemporary Voice for high school students. (Some 8th graders may be accepted on a case-by-case basis.) Registration fee is $25, and scholarships are available.

Find the details at artsconservatoryforteens.org/creative-workforce-summer-intensive.

Students will be immersed in a creative learning experience for three weeks and have the opportunity to perform in a final showcase taking place on Saturday, July 2. Parents and friends will be invited to attend.
. . .

The Arts Conservatory for Teens is a recipient of the Pinellas Recovers Grant, provided by Creative Pinellas through a grant from the National Endowment of the Arts American Rescue Plan.
. . .