Cooking for me is my chance to withdraw from “life” that consists not only of running a theatre complex for a college but keeping up with a private design, production and consulting practice. It’s that “thing I do” that forces me to totally refocus on something other than incessant emails, phone calls and text messages. It is definitely a break from everything that spells all-encompassing work and/or art for sure.

. . .
I’m a culinary child of television. . . cookbooks ?  I have shelves full of them. . . read them?  use them?  hardly ever.  My introduction to “real food” was probably a reaction to a home life that was fairly bland as far as food was concerned.  My mother, a ballet teacher usually was busy at dinner time so Dad became the “short order cook” and although he was very talented, dinner time didn’t exactly bring out any creativity from him.

So my introduction to real food probably came courtesy of PBS – yes, Julia Child,  The Frugal Gourmet, The Cookin’ Cajun. Eventually I graduated to The Food Network / Cooking Channel and Alton Brown’s Good Eats (still a personal fav), Emeril Lagasse and the original Japanese version of IRON CHEF!  I started out stuffing garlic cloves into slits in a chuck roast, stuffing herb butter or goat cheese under the skin of a chicken before roasting.  But then came BBQ and everything changed.
. . .

. . .
BBQ hit television and I was hooked. Pork and chicken in particular. Prior to BBQ becoming a big thing on TV I didn’t really get the difference between grilling and smoking.

I assure you I do now.

I regularly host an event around the holidays that attracts quite a crowd for my BBQ. It didn’t happen last year due to the pandemic but I’m already making plans for it this December. Last time around I think I smoked 6 Boston Butts. I also made a “faux” Porchetta but that’s a whole other story and I’ll touch on it below.  There was lots and lots of other meats and veggies that came out of the smokers and grills I have – but the star of the show is usually the pulled pork.
. . .

. . .
I’ve been praised by a couple of folks who are legit food critics even. But truth?  do I have a recipe? No! I probably never do it the same way twice.

I do come up with a rub. The recipe is usually trial and error but contains the usual – kosher salt, fresh cracked black pepper, chili powder, paprika, a little cayenne or other pepper, brown sugar and ???  It all depends what’s on hand in the kitchen!  Sometimes I rub the pork with yellow mustard before slathering the rub on, sometimes I don’t.

Generally I smoke over a mixture of woods with a base of charcoal. My smoker will easily handle four good sized pork butts at a time. But truth is that even my large smoker has difficulty maintaining that perfect sweet spot of temperature of about 250 for long periods of time. Constant attention is needed.

To that end, I do “cheat.” I use what’s known in brisket circles as the Texas Crutch.

After “hot smoking” the pork at about 300 to 325 F (a temp easier to maintain in my smoker) for about 5 to 6 hours I take the pork off and wrap it firmly in aluminum foil and move it indoors to my kitchen oven. That’s the Texas Crutch.

There I let it sit overnight at about 250 degrees. After about 12 hours total you have amazingly tender pork BBQ, the Boston Butt jiggling almost like Jello.
. . .

Here are a couple of Pork Butts after about 4 hours over smoke. 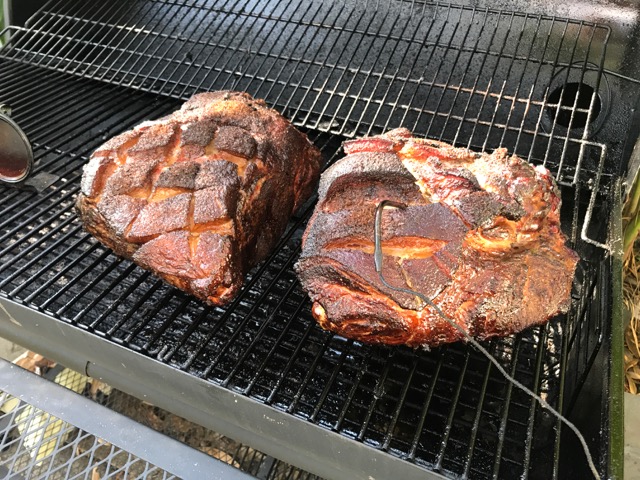 I did try this last year sort of a ‘faux’ Porchetta.  Porchetta should have crispy skin and since there’s no skin on a boneless pork loin I wrapped the entire loin in about a pound and a half of bacon!  (Everything is better than bacon.)  No recipe, but somewhere I had seen a “real” Porchetta done on TV and got inspired to try to make something similar again without buying the expensive cut of meat, in this case a large pork belly.

I took a full boneless pork loin and carefully butterflied it open. Laid a mixture of olive oil, fresh fennel, garlic and rosemary on it and then rolled it up.

This I roasted in a gas grill (only because the wood charcoal one was busy!)  until the bacon had rendered and turned crispy.  Using an instant read thermometer I kept track of the center of the cut. Brought it whole to the table and make slices of it.  It went quickly I barely got a taste myself !

Sometimes as a theatrical designer I feel like I’m losing my creativity. That never happens when I’m cooking. Are my attempts always successful? I assure you that you would not have been interested in my recent attempt at a bouillabaisse, it was not pretty!