Skip to content
You’re Invited to the Salon!
I am proud to be the host and organizer of the first Art Salon to be held at the AIA (American Institute of Architects) on Friday evening August 31, 5:30 PM, at The Center for Architecture and Design 1315 E. 7th Avenue, Ste. 105, Tampa, FL 33605. Everyone is invited to come and participate by bringing some of your work for discussion by the group, or just watch the proceedings. 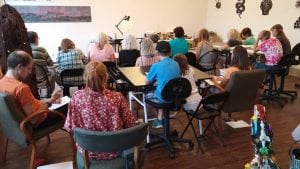 “Salon”
sa•lon
noun
“A Salon is a gathering of people under the roof of an inspiring host, held partly to amuse
one another and partly to refine the taste and increase the knowledge of the participants
through conversation. These gatherings often consciously followed Horace’s definition of
the aims of poetry, “either to please or to educate” (“aut delectare aut prodesse est”).
Salons, commonly associated with French literary and philosophical movements of the
17th and 18th centuries, were carried on until quite recently in urban settings.
The historiography of the Salons is far from straightforward. The Salons have been studied
in depth by a mixture of feminist, Marxist, cultural, social and intellectual historians. Each
of these methodologies focus on different aspects of the Salons, and thus have varying
analyses of the Salons’ importance in terms of French history and the Enlightenment as a
whole. Major historiographical debates focus on the relationship between the Salons and
the public sphere, as well as the role of women within the Salons.
Breaking down the Salons into historical periods is complicated due to the various
historiographical debates that surround them. Most studies stretch from the early 16th
century up until around the end of the 18th century. Goodman is typical in ending her study
at the French Revolution where, she writes: ‘the literary public sphere was transformed
into the political public’. Steven Kale is relatively alone in his recent attempts to extend the
period of the Salon up until Revolution of 1848. Kale points out:
‘A whole world of social arrangements and attitude supported the existence of french
Salons: an idle aristocracy, an ambitious middle class, an active intellectual life, the
social density of a major urban center, sociable traditions, and a certain aristocratic
feminism. This world did not disappear in 1789.’
As recently as the 1940s, Salons hosted by Gertrude Stein gained notoriety for including
Pablo Picasso and other twentieth-century luminaries like Alice B. Toklas.”
“From the seventeenth century to the early part of the twentieth century, artistic production
in France was controlled by artistic academies which organized official exhibitions called
Salons. In France, academies are institutions and learned societies which monitor, foster,
critique and protect French cultural production.
Academies were more institutional and more concerned with criticism and analysis than
those literary gatherings today called Salons which were more focused on pleasurable
discourse in society, although certain gatherings around such figures as Marguerite de
Valois were close to the academic spirit.
Academies first began to appear in France in the Renaissance. In 1570 Jean-Antoine de Baïf
created one devoted to poetry and music, the Académie de poésie et de musique, inspired
by Italian models (such as the academy around Marsilio Ficino).
The first half of the seventeenth century saw a phenomenal growth in private learned
academies, organized around a half-dozen or a dozen individuals meeting regularly. By the
middle of the century, the number of private academies decreased as academies gradually
came under government control, sponsorship and patronage.”