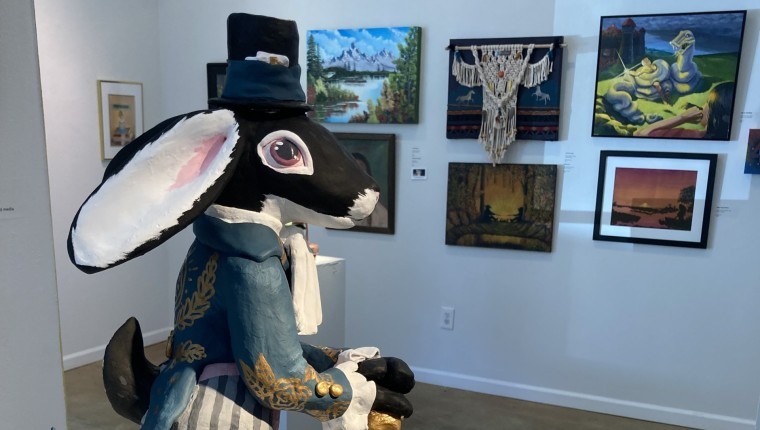 Story and Photos by Margo Hammond

. . .
On our anniversary my husband and I always try to include a museum visit for our celebrations to remind ourselves that marriage is an art. This year — for our 25th on August 25 — we went to an exhibit at the Morean Art Center called Bookish. It was the last day of the show.

For the group show, artists had been asked to submit works based on a book they loved. Their entries were given the same title as the book they chose.

It was an inspiring concept.

Tampa Bay Times book editor Colette Bancroft contributed a portrait of hard-boiled crime novelist Raymond Chandler. Labeled The Big Sleep (after Chandler’s first novel featuring iconic detective Philip Marlowe), the piece earned Colette one of the show’s Honorable Mentions. (Colette was my successor at the newspaper, then called the St. Petersburg Times, when I retired as book editor in 2006).

Another former colleague of mine from the St. Petersburg Times also turned up in the show – photographer Joe Wallis. Joe, who works in black-and-white film, also received an Honorable Mention for his entry – a gelatin silver print inspired by Alwyn Scarth’s Vesuvius, a biography of the fiery volcano.

One of my favorite pieces in the show was inspired by one of my favorite books – Connie Mae Fowler’s Before Women Had Wings. Rebecca Skelton (who is married to Wallis) contributed an angelic figure made with copper wire and wings with hanging feathers. The piece was awarded the Mark Pfeiffer Memorial Award for Sculpture.

Rebecca wasn’t the only artist to choose a book that I loved.

A robust sculpture by Sallie Hackett Brown that combined parts of pitchforks and barbed wire captured perfectly the grit of working class America that I remembered from John Steinbeck’s Grapes of Wrath.

It was fascinating to see how these artists chose to translate books I had read into visual art. Many of the book titles, however, were entirely new to me. But many of these books are now on my reading list, so intrigued I was by the art they inspired.

Thanks to Judith Villavisanis’s eye-popping mixed media piece of a tree come to life under the light of a full Moon (which won the show’s Raymond-James Sponsor Award), I now want to read Canadian Deborah Dunleavy’s 2015 young adult novel about sex, death and grief called The Truth About Trees. Villavisanis’s more demure figurative paintings are currently on display at the Brenda McMahon Gallery in Gulfport.

Also on my must-read list now is Entangled Life: How Fungi Make Our Worlds, Change Our Minds & Shape Our Futures by English biologist Merlin Sheldrake. Two artists picked this book – Amanda Izzo created a nature-inspired quilt painting while printmaker Peter Shurtz chose to honor the book with a gouache on paper rich in earth tones.

I found two works in the show that were prompted by poetry collections – Riley Kinkade’s Lost in My Mind, described as a collection addressing mental health issues such as depression and anxiety, and I Can’t Sleep…, a poetry collection by Canadian poet Devon Attaei.

To illustrate the Kinkade collection, Susan T. Martin, an artist with a bipolar disorder, painted a bespectacled woman in front of a bookshelf filled with cat books. She seemed to be reading Thomas Gray’s “Ode on the Death of a Favourite Cat Drowned in a Tub of Goldfishes” to her cat. I’m not sure how this connects to Kinkade’s poetry, but it certainly piqued my interest to find out.

Also inspired by poetry, mixed media artist CeCe Skeith offered a dream-like piece in homage to Devon Attaei’s I Can’t Sleep… – a photograph of a reclining woman severed into strips set among shredded paper and broken watches. Of course she can’t sleep!

I found several pieces in the show based on children’s books.

Appealing to the kid in all of us, Rusty Hammer’s playful wood sculpture of a tower of dogs was inspired by 101 Dalmatians by Dodie Smith. It won the show’s Tim Salen Memorial Award.

Peter Hynes’s sculpture of clay and acrylic was animated by the original 1740 version of the fairy tale Beauty and the Beast by French novelist Gabrielle-Suzanne Villeneuve. A riot of color, it won the John Eckerd Memorial Award.

But then again, a lot of the works in this show seemed to be pushing beyond their normal boundaries. I was struck by, for example, how many of the paintings on display popped out of their usual 2D state. It was as if the book ideas that inspired them could not be limited to a flat surface, but needed to emerge full blown like the images in our heads when we read. Especially enchanting were the wire whiskers emerging into space from Judy Vienneau‘s entry based on Life Lessons from the Cat, one of the titles in the Chicken Soup for the Soul series by editor and publisher Amy Newark. Vienneau, the founder and director of Gulf Coast Artists’ Alliance, Inc., specializes in wire sculpture, mixed media with wire and graphic design.

The work based on the classic Jules Verne novel 20,000 Leagues Under the Sea also floated out into the viewer’s space, artfully conveying a strong environmental message. Depicting a ship made of two plastic bottles navigating through a sea of corrugated cardboard and paper fish with paper seabirds flying above, artist Dean Fortune‘s mixed media artwork wryly included the label Twenty Inches Under the Sea. Beneath that title was a pull chain with the instructions – “Pull Gently Please.”

Fortune supplied the artwork in rooms at TradeWinds Island Resort and decorated its walls with paintings of fish. Check out a fly-through (a computer-animated simulation) he created for the 2019 Christmas card he designed for the St. Pete Beach hotel.

Some of the pieces in the show left me wondering just what the artist was trying to say about the books they chose — especially if it was a title I hadn’t read yet. Was Kathy Smith inspired by the alcoholic writer in Charles Jackson’s The Lost Weekend when she painted a man cradling a glass of red wine or was the man in the painting her own lost weekend?

Kenwood-based Richard Pollin’s photograph shows a young bearded, long-haired, shirtless man who fell asleep while reading The Absolute Male, a collection of drawings of male nudes by realist artist Thomas Eakins (1844-1916). Was Pollin’s commenting on how boring Eakins’s obsession with male nudes was or did he want to provide us with a modern update of the Absolute Male?

And who is The Keeper of Happy Endings in the Barbara Davis novel Lisa Bagley chose for her piece, a dynamic landscape made of flowing ribbons that seems to move through space?

I guess I’ll have to read the book to find out.