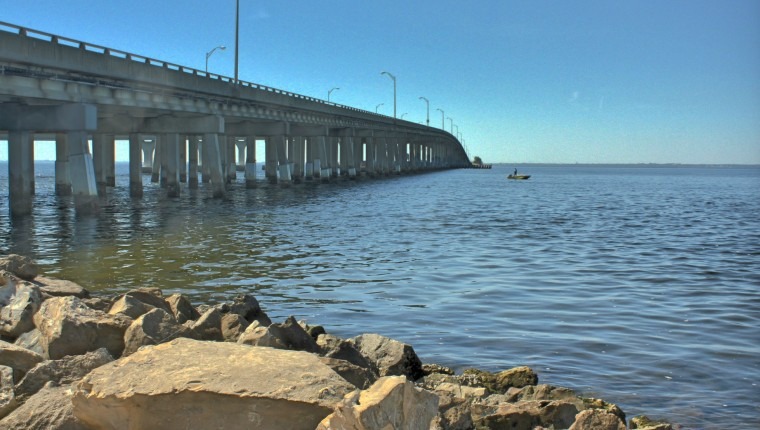 . . .
Bridges have always held a fascination for me. Being a lifelong resident of Hillsborough and Pasco counties, most of my trips to Pinellas have been made possible by bridges. My favorite, aesthetically, is the Courtney Campbell Causeway, but the Gandy and Howard Frankland also hold visual appeal.

Yet even beyond their appearance and function, the depth and meaning of what bridges do — empowering connection between two separated things — speaks directly to a way to approach a piece of art, in whatever form it is presented.

I come from a literary scholar’s background, but this concept of art-as-bridge extends beyond the world of literature. I would like to explore this idea in a way that might allow you a way to envision art as a connecting point to others, even across differences of time, location, and identity.

In whatever medium it may appear, a work of art is an expression of its creator’s psyche – life, in all its aspects, filtered through the artist’s soul and given embodiment through skill. However, as the psychologist Carl Jung explained, art is not simply an individual product – “What is essential in a work of art is that it should arise far above the realm of personal life and speak from the spirit and heart of the poet. . . to the spirit and heart of mankind.”
. . .

. . .
Because artwork can thus be considered soulwork, any piece may be a portal that allows access both to the artist’s psyche and to our collective and connected selves. In this way, artists truly build bridges between themselves and all humanity.

So how about an artistic work — a painting, a sculpture, a play, a song — how do you approach this as a bridge? The point where your psyche encounters the artist’s is accompanied by two closely related factors – feeling and meaning. Both of these can be something that an artist has the intent to convey – however, these factors take place within you, the audience.

For most people, this creation of meaning and feeling happens quickly and without much contemplation. The “bridge” either connects, or it doesn’t. It happens at an almost-unconscious level for most, just as driving across the Frankland, Gandy or Courtney Campbell is an absentminded part of the trip between counties. The mechanics of what the bridge is doing are barely evident.
. . .

. . .
The first step in permitting the bridge-building aspect of any work of art is to become aware of what’s going on inside of you. This is called metacognition, the examination of your own inner processes of thought and feeling. To do this, you must embrace a contemplative approach. As you grasp the piece of art, don’t just feel — ask yourself, what am I feeling?

This requires specificity, not just “I feel good” or “I feel bad.” So often we stop at the most basic of feelings with no further reflection. Be as descriptive as possible – angry, peaceful, compassionate, noble, pessimistic — and it may be a combination of feelings as well, and even paradoxical. Being as distinct as possible in the description will help with the mindfulness factor of the art-as-bridge process.

The next, and often related, undertaking is to observe your meaning-making process. What aspects of this piece are creating a message for you? In visual arts, what significance are you giving to the objects, the forms, the colors, the balance? In performing arts, what implications come to you from movement, stillness, energy, time and space? In literature or other artwork that tells a story, is something of your own memories, values, dreams or fantasies being evoked? And specific to your emotional reactions, ask yourself — what elements are getting me to the feelings I’m having?
. . .

. . .
Let me give you a couple of examples from my own experience. Several years ago, I was enjoying the Florida Orchestra in concert at the Mahaffey Theater. Conductor Michael Francis had explained before the show that the “Swan Theme,” a distinctive melodic phrase from the final movement of Sibelius’ Symphony 5, should catch our ears. When the orchestra came to the concluding allegro molto movement, I quickly grasped this motif, initially played on the French horns. It did evoke an image of flying swans – I felt graceful, elated and inspired.

However, I also instantly recalled where I had heard this theme before – the 1974 hit “Beach Baby” by The First Class. I realized that some of my positive associations were related to the feelings of this song from my youth, with evocations of summertime sunlight and happiness. I could not separate the positive, immediate feelings of Sibelius’ work and the long-held ones of memories of First Class. Nevertheless, Sibelius’s “bridge” lifted me and gave me a sense of joy and freedom in relation to the beauty of nature.
. . .

. . .
Sibelius himself wrote in his diary about the inspiration for this theme – “Today, at ten to eleven, I saw sixteen swans. One of my greatest experiences! Lord God, what beauty!” That image of the swans flying above him entered deeply into his being, and the melody he created represents the soulwork of his experience of nature filtered through his psyche.

Another biographical fact ties him even more to nature and, surprisingly, to the future pop song his melody would inspire. Sibelius spent his early summers in Loviisa on Finland’s southern coast. He recalled later, “For me, Loviisa represented sun and happiness. . . Loviisa was freedom.” The energetic quality of what the sky, the coast and liberation embodied in those notes carried so much resonance with songwriters John Carter and his wife Gillian Shakespeare, that they employed them in a song about the joys of summer, being in nature “out in the sun every day” (as the lyrics reveal).

Both these works of art connect me to Sibelius across the timespan of over a century and to a country across the Atlantic Ocean. In a deep way, the bridge of the “Swan Theme” is a bridge across time and place with a man (as well as a later husband and wife) whose love of and inspiration from nature resonates with mine.
. . .

. . .
While my connection with Sibelius may not seem a great leap of personal identity difference — both of us white, middle-class men — my second example of an artistic bridge does have a greater gap to bridge to its creator. In early 2017, I was in the audience for the American Stage production of August Wilson’s Joe Turner’s Come and Gone in St. Petersburg.

In the play, the character Bynum Walker works as a shaman who helps protagonist Herald Loomis, a Black former slave, heal from a past of both personal bondage and his racial trauma of the Middle Passage. One of Bynum’s main actions in the play is coaching Loomis into speaking a metaphorical story of the trauma that affects him, letting him tell his deeply painful personal and ancestral narrative.

I was immediately taken with compassion for Loomis, but even more so with admiration for Bynum. He resonated with me as someone who cared deeply about healing his fellow humans by using personal storytelling and powerful, archetypal symbols. I myself had experienced the power of this combination, assisted by my major professor in English graduate school. But the character of Bynum helped me clarify the love I have for both the hurt and the healer.
. . .

. . .
In a sense, this is what Wilson himself is doing as a playwright — both telling his story of struggle (which merges with the larger African American story) and being the conduit through which the stories of others emerge. Quick to not make his plays be about him too personally, he once generalized, “I like to say that I’m working off a 400-year autobiography, which is the black experience in America.”

However, he named the character Bynum after his own grandfather, and frequently his characters reflect his own upbringing in economically depressed circumstances. So again, as with Sibelius, Wilson has created a work of art that reflects life as he has assimilated it into his psyche and given a creative embodiment. In Wilson’s case, the art-as-bridge between us didn’t span as great a time or distance relationship as with Sibelius, but a much greater economic and racial one.

As far as the meaning-making aspect of these works of art-as-bridges, after the Sibelius concert, I became more active in local efforts at preserving our natural beauty. My daughter and I have since volunteered on numerous occasions for Keep Tampa Bay Beautiful, assisting in both coastal and inland cleanups and planting efforts.
. . .

. . .
The resonance of Wilson’s Bynum with my own desire to facilitate personal healing also grew from that seed planted at the American Stage performance. Five years after that performance, I have received a certification in Jungian life coaching, specializing in being a healer using the same basic methodology as Bynum.

In both cases, these artists evoked not only emotional reaction but a call to meaning in personal activism of love – love for nature, and love for humanity. The artworks serve as bridgeworks both to these artists — across differences of time, place and all kinds of social constructions — and to all the world.

So, how will your approach to art – in whatever forms you enjoy it – change if you see it as a bridge between yourself, the artist and the human community at large?

As author and activist bell hooks posits, “The function of art is to do more than tell it like it is — it’s to imagine what is possible.”

Can you let the bridge of art take you somewhere “impossible,” connecting with people that will change you and your view of yourself and others? Will you be like August Wilson who, upon encountering the work of Romare Bearden for the first time, felt, “I was looking at myself in ways I hadn’t thought of before and have never ceased to think of since”?
. . .

. . .
Just as the Howard Frankland Bridge is currently going through an expansion process, so too, I believe, must we as the artistic audience realize that each work of art has multiple lanes that sometimes need broadening. While I did physically sit with others in the Mahaffey and at American Stage, I realize that even more folks are on the bridges built by Sibelius and Wilson. There are fellow bridge-travelers spanning all kinds of difference. And our awareness of the commonalities we share and community-at-large we embody means our understanding of each bridge may need renovation and growth.

I hope that you will take the time to more mindfully use all the bridges in your life — actual or metaphorical — to connect with all that you feel is separate from you, and to realize it may not be as different as appearances would seem.
. . .