Sending scripts out to development and production opportunities this week, like every week, and working on rewrites of The Burlesque Astronomy Play. Plus a cheery phone interview with the Austin American Statesman, for an article Andrew Friedenthal is writing about The Filigree Theatre’s inaugural season, that’s closing out with Trio. 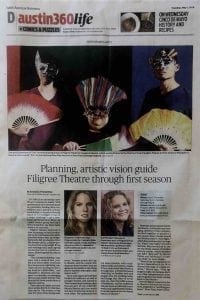 I talk with him about Trio’s development and the New Play Exchange, where Artistic Director Elizabeth V. Newman discovered the script. The NPX is a project of the National New Play Network, a website where playwrights can share scripts, theatres can search for scripts that suit their needs, and anyone can sign up to read and recommend new scripts. I’ve discovered so many amazing plays and playwrights on the NPX.

Here’s a copy of Andrew’s article, “Planning, Artistic Vision Guide Filigree Theatre Through First Season.” The pleasant surprise is that The Filigree Theatre isn’t the only theatre company in Austin that’s run by women. 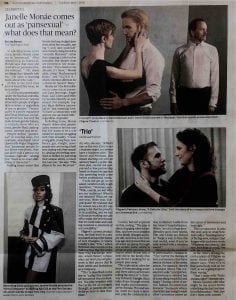 This week I get a note from Miami’s City Theatre, who produce one of the country’s best 10-minute play festivals. They’d like to produce Duck during this year’s Summer Shorts. I submitted Duck four years ago and thought it had been long rejected, so it’s wonderful to hear that it’ll be part of this year’s festival – they’re lovely people and very kind to playwrights.

I get an idea for Alex Jones’ commission for Collective Soles. He asked me for a scene that’s real, and true, but that will get misinterpreted and misunderstood and lead to a discussion of perceptions and biases.

I need to write the scene that’s true, plus dialogue for the misunderstandings, which will be interpreted in very different ways by several choreographers. One of the choreographers is Sean McDonald, who was part of the St Pete Arts Alliance’s workshop of Trio last summer at The Studio@620, so it’s great to get the chance to work with him again.

I make a start on the true scene for Perception Shift, taking the title from our Chicago Dramatists class with Dana Lynn Formby. We talked a lot about perception shifts in plays, when a character thinks the world is one way but something is revealed that makes them realize the world is very different, or they are.