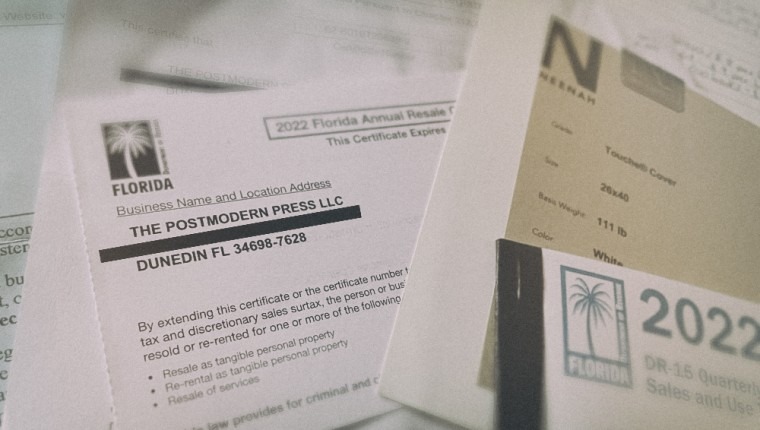 The Creative Pinellas Professional Artist Grant arrived at an interesting time in my writing career. It’s not an overstatement to say that my entire trajectory was in flux until that very moment.

My first novel, Thieves, Beasts & Men, was released this past October. Readers loved it. It received amazing editorial reviews from the industry. It was even honored with three awards. What’s surprised me most about this world of literature and publishing is how little your talent or accolades impact your financial standing. Everyone says authors need a day job. I’ve heard that authors are one of the least paid professions as a whole, netting about 5K per year on average. And boy, this was no exaggeration.

They say you should never meet your idols. Well, the writing world itself has always been my idol. Perhaps this is because I was a GED kid, and I carried with me an intense need for academic recognition. To prove to the world that I was “smart”. An above average need to stick it to the man. Wherever my drive came from, it landed me exactly where I aimed. I scored an agent and landed a deal with an awesome small publishing house and an amazing editor.

So why did I feel let down by this experience?
Who let me down, if anyone?
Maybe I did it to myself.
Idols, and all….

When I turned in my application for this grant, I had just disassembled my sophomore novel at the direction of my agent who hated the original (though, to be fair, she used much nicer words). This seems as good a time as any to further introduce you to Bands of a Small Hurricane, as you will hear a lot more about this book in the coming months, as it is the key project for this grant.

Bands of a Small Hurricane is a unique and complex project. It’s slightly biographical, highlighting a dangerous rescue mission on the Atlantic Ocean championed by my grandfather in 1971. It also uses my own childhood, as well as those of both my parents, as a launch point for creating the main character, Daniella Quinn. The novel is set in the Florida Keys in 1967, and while I was born and raised there, the 80s and 90s are a far cry from the 60s. So I turned to mom and dad. With their childhoods also rooted in the Keys, they allowed me to pillage their memories and experiences for the enhancement of the characters, storyline, setting. Basically everything.

Bands of a Small Hurricane is so much a part of my family that it could stand up from my keyboard right now, made of flesh and bone, and carry a conversation. It’s so close to me it could be a blood donor. And here, there be problems.

This book is the most extraordinary feat of creativity I’ve ever accomplished. I’ve previously said that not only is it the best thing I’ve ever done, but it’s likely the best thing I’ll ever do. I sure hope that’s not the case, but fear that it is.

Thieves, Beasts & Men underwent some minor revisions before it was officially published. Scenes were cut, wordiness was paired down. This was the second book I’d written at that point, but basically my firstborn. And I did what every aspiring novelist must do—I followed the direction of those who knew better. While I mourned the scenes that were removed, and was mildly resistant to a timeline alteration, the finished product was exactly what it needed to be, and I wouldn’t change a thing. But when my agent wanted half of Hurricane deleted and replaced with something more commercial, my heart lodged in my throat and stayed there for months.

But I had to be game, right?
I’m dancing with my idol now, right?
I don’t want to be a starving artist.
Anything for wide readership and distribution.
Yes ma’am, no ma’am, what should I do now, ma’am?

If we’re being honest, I think sometimes we hope to be wrong. That way failure is on someone else’s shoulder. If an agent makes the final call and it fails, I’m off the hook. I have someone to blame. But if I take a stand and it fails, I’ve destroyed everything I’ve worked for. And I have no one to blame but myself. That’s a lot of pressure, a lot of fear to carry in the soul.

I’ve always joked that I’m a terrible employee. Out of the box thinking is my own personal challenge to the status quo. (That’s just how it’s done, huh? Ya think so? Watch this shit.) While in life, this theory has served me well, but in the traditional workspace, eh…not so much. Hence why I thrive in my freelance day job. It’s the only option for me.

Catch the metaphor? Here’s another. When my kid was about a year old, his father and I discussed the possibility of daycare. The thought of having a little part time job in the afternoon sounded awesome, not to mention the potential for real adult interaction. I was practically salivating for it. We talked about it at length, and finally came to the conclusion that no, we would not be using day care. I would continue as a stay-at-home mom until he started pre-K. Why? Because no matter how awesome the daycare center might be, no matter how caring and doting the child care workers, they would never love our kid as much as we do. Our incredibly precious baby would be just another baby to them. Same as the next. Essentially, just a number. A cog.

After I’d spent months rewriting Hurricane to be more commercial at the urging of my agent, I had a complete mental and creative breakdown, and undid months of hard work. All of it. I picked up the pieces and put it all back together the way I originally intended.

I had to follow my gut. I had to do it to honor myself and my family’s legacy. For the first time in my life, I couldn’t fear being wrong.

And I had to break the news to my agent.

I wasn’t exaggerating when I said that this grant has found me at a unique time in my career. The work samples I submitted to the judges were all—with the exception of one—chapters from (my original) Bands of a Small Hurricane. During the live judging, I cried when they talked about how they couldn’t put it down. Every compliment cemented in my mind that I had made the right decision for this book.

For the last couple months, I’ve worked very hard – with the financial award granted by Creative Pinellas – to successfully launch The Postmodern Press: A Gulf Coast Publishing House. The first book to be released will be (no surprise here)…Bands of a Small Hurricane!

Sure, I could’ve pursued another agent, one who would fully champion my original vision for Hurricane. I briefly considered it. But I’m a terrible employee, remember? And no one will ever love my baby as much as I do.

And with this move, I have finally found my true idol: Complete Creative Control.

More info to come in the following weeks.