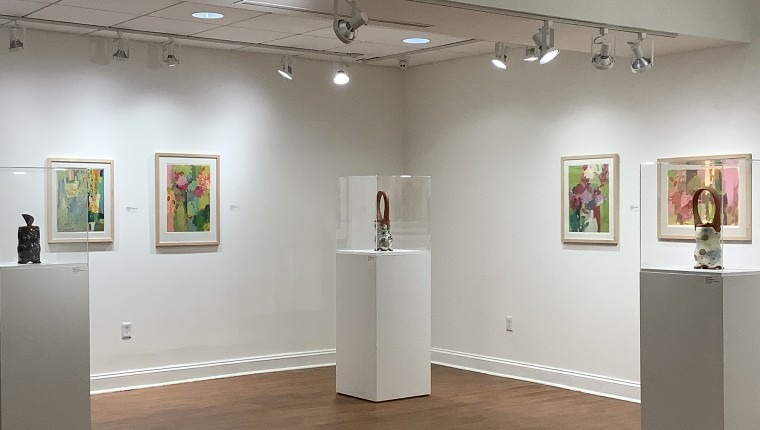 . . .
Driven from the Garden, a two artist show currently at HCC Ybor’s Gallery 114, has shifting shapes and forms tattooed with flowers and colors.

Color pigments from Earth and history. . . Shapes and forms from identity. . . Flowers, the ephemeral pronouncements of cyclic events.

The two artists are Marjorie Graff and Kim Kirchman, who met when they were hired on the fine arts faculty at St. Petersburg College in the late ’90s, with Graff in printmaking and Kirchman in ceramics. They came to the fine arts department replacing retiring professors, and in a sense, ushering a new era. A friendship bonded from the start.
. . .

. . .
The exhibition title, Driven from the Garden, is a phrase many would immediately associate with a western Christian cultural foundation loaded with specific and metaphoric meaning.

Of course, the garden, whether in the actual agricultural or landscape design sense, or in mythological storytelling, is not exclusive to any one people or culture. During the artist talk at the exhibition opening, HCC Gallery Director, Amanda Poss asked about the title.

Marjorie Graff replied, “I don’t think that it’s just one word Driven. . . you can also use the word, Derived. . . it’s not about a little bouquet of flowers that we’re going to make an image. . . it’s about what a garden really means, as a metaphor for life. . . that whole process of a garden being something that repeats, rejuvenates, comes back. The garden has so many connotations. . .”

Kim Kirchman added, “For myself, I definitely think it’s wrong to have that religious kind of reference point. . . I mean, the source of all evil in the world because a woman decided to take a bite of a tree of knowledge. . . What is interesting to me is, it was because the wanting to know – that was the fall.

“This is especially relevant now in the time we’re living in, because sort of the anti-intellectual kind of overlay that we have almost everywhere, also politically. . . It’s a way of re-claiming that power of knowing. . .”
. . .

. . .
The works in the exhibition are very good for the eye, and by connection, to the brain – to the cognitive, intuitive and pleasure processes. They are scaled for intimate viewing of complex subtleties in details, textures and layers, and all the hallmarks of hands-on craftsmanship.

Marjorie Graff’s pieces form a line of color at eye level on the wall encompassing the gallery.

Each color, shape and image is layered yet does not completely obscure what is beneath. They interact, creating new hues and values – resulting in stacked textures giving visual depth, and some elevation changes that perhaps only the hands of a Braille reader can detect.
. . .

. . .
They are hand-printed mono prints on paper using a wooden burnishing block surviving from Graff’s high school days. Each print is built up through layers of burnishing, one on top of another, in a process that the planet has been perfecting since it coalesced into this ball of dirt – the eternal movement of tectonic plates, eroding and compacting, plates shifting, converging and uplifting, that we now marvel at in the stratified rocks conserving eons of geologic history.

Graff references the garden when describing the prints – “These prints, even though they’re about flowers, they’re also about whole cycle of life, so flowers bloom, they decay, they seed, they come back again, this whole cycle, if you look carefully, is in the print. . .”
. . .

. . .
Kim Kirchman’s ceramic pieces, save for one, are on display pedestals throughout the gallery floor interacting with Graff’s line of colors creating depth perceptions and dialogue – a dialogue between artists, that is a continuation from their first day of meeting as educators, then as friends through all the turns of living.

The one piece not on a pedestal is what at first looks like a grid of ceramic tiles on the wall, tiles one might see on a decorative garden wall, but each 12-inch square tile is in fact a 2-inches deep box, with a convex front surface pushed out by the artist own breath when she breathed into each form during creation, while the clay was still moist.

That all important breath of life!
. . .

. . .
Kirchman calls the pieces on the pedestals baskets. The baskets are not constructed in the traditional basketmaking process nor do they even imitate reeds, cane, or any other organic weaving materials or patterns – so they could also be considered vessels, clay containers with hefty tall curved handles. And from certain angles they have anthropomorphic definitions – many mythologies and philosophies have called the human body a vessel.
. . .

. . .
Either way, flower motifs decorate surfaces in a process that has Kirchman painting the design on newsprint with under glaze and glazes which are then transferred onto the wet clay, a bit like those temporary tattoo transfers kids (and now adults too) play with.

Kirchman regarding the imagery of the pieces – “People come in and see the floral decoration when in fact what you see on the surface isn’t always the content. . .”

The answer may be found in how both artists share an aesthetic lineage to the forerunners of the ’70s Pattern and Decoration (P&D) movement like Miriam Schapiro and Robert Kushner, whom they referenced in their talk.

Patterns and decorations have often been relegated to craft as flourishes, not serious art making. P&D artists depart from this codified ‘good art with taste’ canon.

In her article on the P&D exhibition at MOCA Los Angeles, Catherine Wagley quotes the late Holly Solomon, one of the first art collectors and dealers to embrace P&D artists – “Decoration has always been particularly despised in art discourse. . .”
. . .

What they all seek can be found – in ocean waves, gravitational waves, sound waves. . . in spirals manifesting from the shell of a snail to flower petals to the galaxies. . . fractals of a fern leaf, tessellation of the bee’s honeycomb, symmetry of the human body, Moon phases, the path of Haley’s Comet, the Fibonacci sequence, textures of tree bark, atoms. . .

During a nature walk in Australia, I saw this bower bird picking up objects to decorate its nest – a unique piece of architecture in and of itself – bottle caps, a piece of colored plastic, deliberately placing each object and rearranging them to impress a potential mate. We humans do much the same to our homes, and to ourselves with jewelry, or hair do’s, or wearing certain clothing like the Scottish tartan identifying oneself of a specific origin.

And sometimes those pretty colors and decorations and patterns have a defensive purpose as seen on the wings of certain moths, or colors on particular frogs. Humans imitate by wearing camouflage for war – though now camouflage has transitioned to being everyday wear, worn by people going to the grocery store.
. . .

. . .
Once deemed superfluous in certain circles, we now find patterns and decorations carrying both a pleasure and a meaning – and they’re intertwined, expressing deeper laws making possible our very existence.

In this I agree that “the garden has many connotations” and “the surface isn’t aways the content.” But the surface has beauty to appreciate because the artists have made it so from the bottom up.
. . .