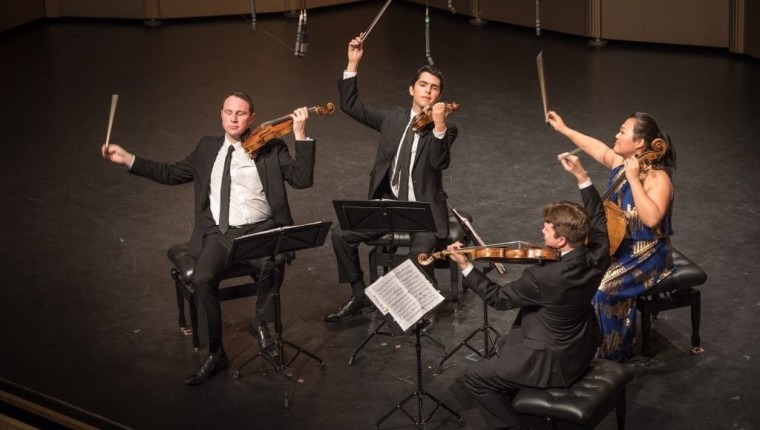 The viral pandemic gripping our planet has put much of humanity in a lockdown mode, changing how we socialize, travel, dine and earn a living.

It’s also given us time – and lots of it – to reflect on the importance on the arts in our lives, and in this writer’s case, how a rich musical season suddenly went silent.

Maybe there’s some good in that, or possibly a lesson to be learned. Because over the last couple of months I’ve been immersed in concerts celebrating the 250th anniversary of Ludwig van Beethoven’s birth and had planned my entire year around them. My strategy was, and still is, to interview artists, attend performances, write about the works, share opinions – and fill the emotional cup.

The experiences I enjoyed, although cut short, give me hope for what follows.

I kicked off the Beethoven party with The Florida Orchestra’s powerful rendition of the Leonore Overture No. 3, a marvel of musical storytelling that captures the light-triumphs-darkness motif as well as anything the composer wrote. The program included a lyrical performance of Grieg’s Piano Concerto and Gershwin’s color-saturated Cuban Overture. Two weeks later, the orchestra revved up Beethoven’s Eroica Symphony in a version retouched by Gustav Mahler, and giving listeners a funeral march of arresting presence.

Other performances that impressed the orchestra’s audiences were the Sibelius Violin Concerto, a lushly romantic work with wisps of sweetness that belie the composer’s struggle with alcoholism. Principal clarinetist Natalie Hoe gave her debut as soloist in Mozart’s A Major Concerto and listeners can expect to hear much more of her subtle talent.

Opera Tampa kicked up its heels with an evocative staging of Bizet’s Carmen, featuring mezzo-soprano Catherine Daniel in the tragic title role that forces us to revisit portrayals of feminism in art. The company staged its production in the smaller Ferguson Hall at the Straz Center, creating an intimate atmosphere for an otherwise grand opera.

Beethoven’s most profound utterances hide in his chamber music, and the Calidore String Quartet devoted a night at the Palladium Theater to three gems: the Quartets Nos. 6, 11 and 15 – all tests of introspection. The final work, in A minor and with its prayer-like benediction at its core, was nothing short of transcendental. You could place this early 19th century adagio in a program of progressive 20th century pieces and nobody would flinch.

For three consecutive weekends in February and March, I drove north of Orlando for the Winter Park Bach Festival, now in its 85th year. I’ve been coming to this event since the early 1980s and still recall performances that shaped my thinking about music, including a crystal-cut Mass for Five Voices by the 16th-century English composer William Byrd.

An uplifting night featured two large works that filled every inch of the Knowles Memorial Chapel stage – the Brahms German Requiem followed by Dvorak’s New World Symphony, featuring the Bach Festival Chorus and Orchestra under the direction of John Sinclair. This unusual pairing of somber and stirring somehow gelled, as if the two composers – who were friends – had planned a posthumous fête.

The festival’s Concertos by Candlelight series the next weekend included a couple of Beethoven staples, the Violin Concerto and the Emperor, in thoughtful, reserved performances by Soyoung Yoon on the fiddle and Alon Goldstein at the keyboard. Yoon chastised the parents of an unruly child in the first row, tapping her bow on his seat as if to remind them that babysitters do, in fact, exist.

The final weekend – before the festival closed due to the coronavirus – gave us Beethoven’s mighty Ninth Symphony, a slightly wayward reading but injected with a fusillade of singers in the thrilling Ode to Joy finale.

If that wasn’t enough to sate listeners, Sinclair devoted the next day to Bach’s Mass in B Minor, the composer’s crowning masterpiece and an experience that, after a truncated music season, left this listener and certainly others, both exhilarated and exhausted.