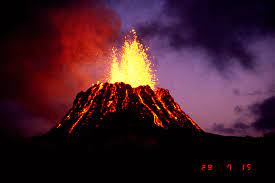 I am beginning a new work. The story is based in autobiography. My father was violently killed when I was nine. I was with him at the time. I experienced a break of sorts- everything seems to have stopped in that moment.

I have no longer have any memory of my life before that moment. The experience of that helplessness and complete lack of any control to change events left me with an anger that I never addressed. I carried it and suppressed it as best I could- until I couldn’t. I struggled with anger and mistakenly embraced it as a source of personal strength, eventually becoming afraid and unwilling to let it go. After many years, I realized that this anger had become a “thing” to me- not a feeling, but almost an entity.

As an adult, I spent quite a bit of time in the Hawaiian islands as an actor. This was when I first met Pele. She has been with me, in the periphery of my mind, for many years.

The novel is titled Muse Of Fire, a reference to Shakespeare’s Henry V and the opening invocation of the spirits of creation.

A woman has journeyed back to the islands after many years. She has a task to perform- a ritual to complete. She has in her possession what she believes to be a key to her spiritual survival. An item that was stolen from the gods by her father when she was a child. An item that her mother blamed for all the bad in their lives- the violent death of her father, their abandonment by the people they counted on to help, the hardships of existence after that loss, the financial and emotional battles.

Over time, the woman had also adopted this idea of being cursed somehow- that nothing she could do would ever be enough. Eventually, the stolen item also became the talisman she blamed for her mother’s descent in Alzheimer’s, her death to that dementia and disease, and the emotional hell she felt at her own anger toward her mother for succumbing. The same anger she has carried for decades over her father’s death and her inability to save him in the moment that took him away forever.

The woman returns to the scene of the crime. The spot where her father stole the item from the gods so many years before. A stone. A rock of lava from the slopes of

Kilauea volcano. Snatched up by her father in playful defiance of the warnings against taking the goddess Pele’s bones. A thoughtless prank played while on a short vacation to the Big Island during her father’s term at Hickam Air Force Base on Honolulu.

Did it really change everything? How will the woman reconcile with the volcano goddess she has so long blamed for her life’s pain?

Beginning this story, I felt how healing it could be to transfer the power of my anger into the entity of that stolen lava rock. That I could give that powerful anger back to Pele, who could use it to create new worlds. The imagery of this offering to the goddess really helped me to release anger for anger’s sake and to then look deeper into the past. When the woman comes face to face with her anger, in the form of the goddess herself, she is given an opportunity to release the things that have crippled her and to give back the fire that was never hers to carry.