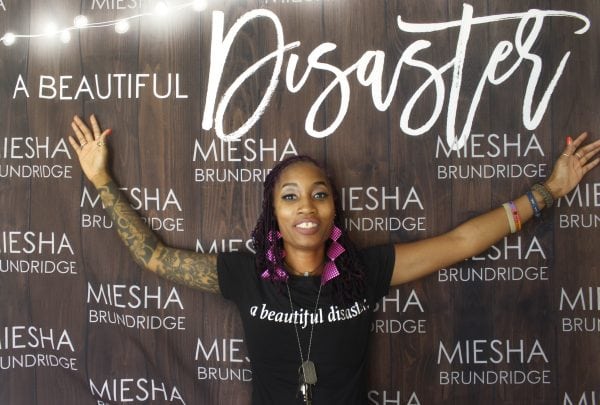 A Glimpse Through Miesha’s Window

The author of A Beautiful Disaster has been to war and back. She’s survived injury to mind, heart and body, and has written a stunning book of poetry.

What I like are good mornings and random texts with check-ins. Guys who care. Sweet Sundays with coffee as I write and reflect. Smiles from strangers because they know that smiles are contagious. Guys with guts to tell the truth. Guys who aren’t afraid to hold my hand and give me some of their time. A house with a body of water, like a ranch, a lake house, or even a beach with some kids. As long as his love makes me a better person. That is what I like.

Writer Miesha Brundridge has been working on a book — her debut collection of poetry — for the past 10 years. Now she’s ready to share her lessons and experiences with the world. She’s learned being too careful with her heart can cause her to miss out on those who have learned to use love properly.

Join Miesha on Sunday Sept. 23, at Studio@620 from 5 to 9 p.m. for a night of reading and gifts. She’s preparing/hoping for 75-150 people. Everyone who attends gets a unique key, symbolically infused with her resilience and wisdom. $10 suggested donation, free food from Mazzaro’s and a cash bar.

A Beautiful Disaster spans a vast depth of experiences from 18-30; her journey of going into the military, living in Hawaii, navigating herself out of abusive relationships, getting married, getting divorced, and coming out the other side more intact than she was before. Her house is accentuated by beautiful pieces of art she’s made with her twin sister Keesha, such as the wine bottle painted blue covered in glued-on butterflies; pieces she calls recycled art.

“I saved the military lots of money when it came to receiving and transferring medical supplies,” she said. “I created a system that helped with better pricing and shipping.

I was injured because of training and combat wear-and-tear on loading and unloading. I had my surgeries for both legs in Hawaii before I was retired, close to 6 years I served.”

“A local writer I like a lot is Maureen McDole — her writing is very similar to mine and it’s been hard to find a writer that’s similar to my own writing, after all the poetry I’ve read,” Brundridge said. “Also, Alice Walker; she wrote The Color Purple and Hard Times Require Furious Dancing.”

It was after her divorce that she realized the scope of her literary goldmine once she really started editing everything.

“I said, ‘Wow! People should really read this stuff.’ Even open mics, the applause I get and the outpour of excitement after the open mic shows — a lot of people like the writings and hidden truth in these poems I’ve written. So I said I’m going to take a leap of faith and do it. That’s why I went ahead and put it out. I think I got a lot of good stuff to share with people. I’ve seen a lot of things that’ve happened: war, being in abusive relationships, seeing my parents relationship and other people’s stuff. I don’t know — I just had an awakening, that’s all. I don’t know what pushed me to push the book out, I woke up one day and said people should hear what I have to say.”

Meisha hopes the poems she has chosen to read that night will open up a window of experiences people don’t know she had to face, particularly because she remains so joyful to this day.

“This is gonna be an eye opener for another side of me, the real side of me,” she said. “It’s gonna be crazy, like the words that I wrote in this book is everything; it’s like a personal window I don’t open that often.”