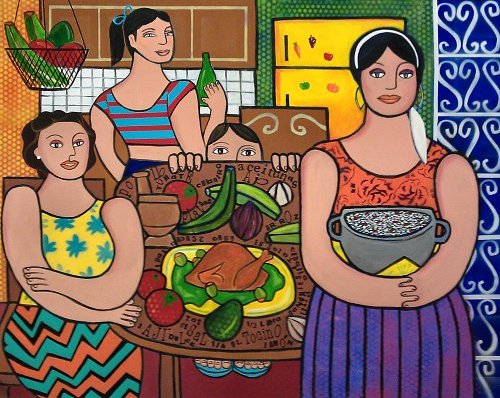 I have no solid numbers to back this statement, but I would be willing to guess that the female form rivals the landscape and the still life as art’s most popular subject. From the soft and peaceful curves portrayed in Ruben’s “Venus at the Mirror” to the jagged edges and tragedy of Picasso’s “Weeping Woman,” females have been portrayed in every way imaginable. What is it about femininity that captivates and inspires us? I imagine that every artist might have a different answer to that question.

The vast majority of my work features women. They are large, and their curves are plentiful. They are confident and serene and often stare out from the canvas directly into the eyes of the viewer. When I paint a female figure, I am not only professing my admiration of the female sex, but also expressing a personal connection to it. Growing up a less-than-masculine boy in a machismo-driven Latino culture is no walk (or in my case skip) in the park. Childhood might have easily felt like an uphill battle if not for the women who loved, protected and nurtured me. They accepted me for who I was and expected no more or less. It is because of them that to this very day I feel safest, most connected and creative in the presence of women. I can count on one hand (and still have a finger or two left over) the number of men who have directly played influential roles in my life. This has just come to be in the past 5 or so years. That is neither a complaint nor regret, just a factual observation. Center stage among these women was my mother, whose larger-than-life persona taught me the importance of self-expression. It is safe to say that she is the reason I paint today. She was a single mother, who at 33 got tired of waiting for her knight in shining armor and took matters into her own hands by choosing to have me when the opportunity presented itself, a decision that was neither common nor well received some 48 years ago. Because of her, I know that judgmental stares are seldom seeing the whole picture.

When I asked for a karaoke record player so that I could sing along to ABBA records in my room Santa brought me one… with flashing lights. Oh, Dancing Queen! When I wanted to play “Beautician” and sculpt her wet hair into what can only be described as a Whoville-do, she was game. When I wanted a paintbrush instead of a baseball bat, there were no questions asked. Instead, I got the brush, the paints, the paper, and a whole lot of encouragement. “I used to paint too when I was younger, you know?” she shared, handing me an old photo of her standing before a mural she painted. My first drawings, a few of which I still have, were of her. She was my very first muse.

Today, I continue to surround myself with strong and inspiring women. I suppose I always will. Femininity is power. Feminine energy is infectious and uplifting. It feeds my soul and shapes my art.