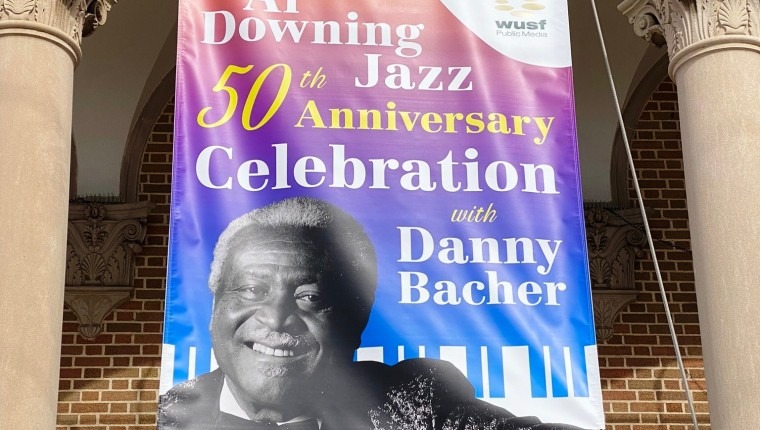 . . .
This Sunday, the Palladium Theater celebrates jazz with a gala concert that honors the 50th anniversary of the Al Downing Tampa Bay Jazz Association.

Member of the Downing association will pick up a Palladium Jazz Award on Sunday, along with WUSF Jazz Director, Mike Cornette, who announced his retirement in December.

Award-winning singer, saxophonist and songwriter Danny Bacher headlines the concert. Bacher makes hot jazz and pop with influences from Louis Prima and Mel Torme. In 2020, in a Jazz Times readers’ poll, Danny was chosen as one of the top three jazz vocalists, along with Kurt Elling and Gregory Porter.

He will appear as part of a quintet of Tampa Bay jazz stars including Alejandro Arenas on bass, Rick Costa on drums, John O’Leary III on piano and James Suggs on trumpet.
. . .

. . .
The Al Downing Jazz All Stars will open the show.

Al Downing Jazz All Stars are all well-known names in the local jazz scene including Vincent Sims on guitar, “Stretch” Bruyn on piano,  Kenny Walker on bass, Ron Gregg on drums, Dwayne White on trumpet, Rodney Rojas on saxophone and Brandon Nelson on trombone.

. . .
Al Downing is legendary to those who remember the golden days of jazz in St. Petersburg. A desire to perpetuate jazz among young people was always foremost in his mind. He formed his first band in high school and continued to pursue music throughout his life including leading the 613th Army Air Force Band in Tuskegee and military bands in the U.S. and Japan. He taught at Gibbs High School – now the Pinellas County Center for the Arts – and for 20 years at St. Petersburg Junior College, before retiring in 1983.

In 1971 a group of jazz lovers met with Al and formed the Allegro Music Society which in 1981 became the Al Downing Florida Jazz Association. It merged in 1987 with the Tampa Bay Jazz Society and exists to this day as the Al Downing Tampa Bay Jazz Association, Inc. focused on encouraging the understanding and appreciation of jazz and its origins and presenting live jazz performances and events.
. . .

. . .
Important in the mission of ADTBJA is working with youth and presenting them with the opportunity to explore and perform jazz, and awarding scholarships to local high school students who plan to study jazz in college.

With general admission seating, CDC-approved air filters and plenty of room to spread out in the large Hough Hall upstairs, the Palladium is working hard to create a safe space for music lovers during the pandemic.
. . .