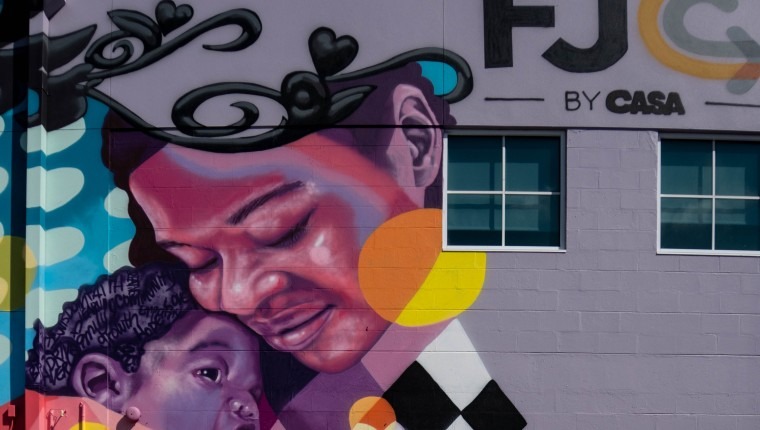 Story and Photos by Jennifer Ring
. . .

. . .
There is no typical domestic violence survivor.

“We want to be very clear that anybody can be affected by domestic violence,” says CASA Pinellas CEO Lariana Forsythe. “It’s predominantly male-on-female, but it happens in LGBTQ couples, it happens female against male. It runs the gamut, because it’s not about physical power. It’s about mental power and control.”

How do you welcome these diverse individuals and guide them through the difficult process of making a new life? The answer is in the universal language of art.

Art performs many functions at CASA Pinellas’s new Family Justice Center in St. Pete. It’s used to show the community why they’re here, what they do, and who they serve. But, more than that, the art at FJC welcomes domestic violence survivors and guides them on a path to healing.

“The goal of [the pathway] is not just to give it demarcation that that’s where people should be crossing, but also a visual to sort of slow down traffic,” says Willi Rudowsky, who funded the mural’s creation along with her husband Hal Freedman.

This isn’t Rudowsky and Freedman’s first mural — they’re hospitality sponsors for SHINE, St. Petersburg’s annual mural fest, and Freedman sits on the board at Creative Clay, who make the arts accessible to adults with neuro-differences. The philanthropic duo is drawn to projects that support marginalized populations and the arts, which explains their 20-year relationship with CASA.

As regular donors, Freedman and Rudowsky had early knowledge of CASA’s plans to build a Family Justice Center. During the planning and fundraising stages, Forsythe shared mockups with Freedman and Rudosky, one of which included a mural. Freedman and Rudowsky jumped at the chance to help fund the project. They budgeted an amount, drew up a request for proposals, and sent it out to five area muralists. Johnny Vitale, Cecilia Lueza and Zulu Painter all responded.

“Any of them would have done a beautiful job,” says Freedman.

After chatting with Forsythe, they selected Zulu’s proposal from the bunch.

“We decided that Carlos really had a beautiful way with faces and emotions,” Freedman told Creative Pinellas. The mural features four faces. On one side of the FJC, a woman cradles a baby in her arms. Nestled within its curls are the words Drive, Bravery, Family, Growth, Hope, Empathy, Love, Community, Wisdom, Faith, Create, and Unity.

On the other side, a young woman stretches out a helping hand. To the right, a young man meets your gaze. Who are these people?

“They’re everyone,” says Zulu Painter. “They’re people from our community who have in some way been affected by family turmoil. The biggest young lady represents the whole of CASA and our community that wants to help, that wants to lend a hand and help you.

“So the figures in it represent more than one aspect or one group,” Zulu Painter continues. “We want representation for everyone, because domestic violence affects everyone. It affects children, it affects adults, it affects women, it affects men.”

By incorporating diverse individuals, the mural shows the surrounding community who CASA serves. FJC by CASA is here to help anyone and everyone who’s been affected by domestic violence.
. . .

Domestic violence survivors are diverse, but they share a common problem – bureaucracy.

Within the pamphlet lies the most incomprehensible flow chart I’ve ever seen. It illustrates the process of getting help in Pinellas County as a domestic abuse survivor.

Or how it was done before the Family Justice Center came to town.

“This is one of the graphics that we use to explain what it’s like for a domestic violence survivor,” Forsythe tells me.

In the center of the image, a blue bubble reading “Domestic Violence Survivors & Their Children” has 17 arrows coming off of it. The arrows point to all the different places a domestic violence survivor might go to seek services in Pinellas County. The Domestic Violence Agency provides relocation assistance, restraining orders and social support. Social Services provides food, financial assistance, transportation, housing and clothing. Police document injuries and launch criminal investigations. The State Attorney’s Office prosecutes the abuser. The list goes on.

“So people give up. They’re like, ‘Screw this. I can’t do this. What do I do with my kids? I can’t take this kind of time off from work. I just can’t do it.’ So prosecution rates are very low, because nobody’s given any thought to, well, you have the services, but they’re incomplete, they’re inconvenient, nobody’s going to do it.”

Not everyone needs every service, but wouldn’t it be great if domestic violence survivors could find all the services they need under one roof. That’s the idea behind Gael Strack and Casey Gwinn’s Family Justice Centers.

“As Assistant Chief, I hear about the barriers that survivors of domestic violence face day in and day out,” Kovacsev said to those assembled. “We have resources in our community. However, sometimes they have attritioned and fragmented or are not always easy to navigate. Historically, options were provided in pamphlets to someone, and we hoped that they would just follow up and show up. But I had to reach out to different agencies, and we knew that just didn’t happen.”

“Think about that for a second,” Kovacsev continued. “Imagine being overwhelmed and having to travel to different locations, set appointments, take time off work, tell your story each time. It just doesn’t go well. Survivors kept telling us, ‘I can’t go to court because I don’t have transportation and childcare. I can’t be with detectives because my abuser is preventing me from doing so. I can’t get an injunction because I don’t have an attorney. I can’t get child care because I can’t afford it. I don’t have the financial resources to beat my abuser.’”

By providing all the necessary services in one place, FJC removes these barriers to getting help.
. . .

Family Justice Centers’ one-stop shopping approach provides a direct way forward for domestic violence survivors. And it’s not just there in practice, it’s there in logo as well.

Stevie & Fern’s relationship with CASA began about five years ago.

“We partnered with them through our Waves of Change program, which is a program that we created when we started our organization,” says Stevie & Fern cofounder Thomas Paterek. “We provide discounted rates for nonprofits all over the state of Florida to provide branding and design services. . .”

The redesigned CASA logo is a gray hand, held out like a stop sign, with two purple fingers connected to form a U.

Forsythe explains the presence of the purple U, “You have the power to stop domestic abuse.”

Five years later, when CASA needed a new logo and a new look for the Family Justice Center, they reached out to Stevie & Fern again.

As Paterek tells it, “They came to us and said, ‘Hey, we have this great opportunity. We’re opening this Family Justice Center and, essentially, it’s going to be one of a kind in Florida. We want to stay true to the CASA brand, but also be really welcoming to those in need who are going to need our services directly.’”

The new logo presents the letters F J C with the C emphasized in gold, terminating in an arrow pointing the way forward. Emerging from a time when the prosecution of abusers didn’t always move forward as it should have, that tiny arrow speaks volumes.

“Nothing warms my heart more than the new logo,” FJC cofounder Casey Gwinn said at the grand opening of FJC by CASA. “In all of our research, trauma looks backward and hope looks forward in life. That arrow is hope.”

Inside the FJC by CASA, the artwork on the walls contains affirming messages. It reads, “Life is Beautiful,” “Believe in Yourself,” “Today is Your Day.”

For Pinellas County residents stuck in an unsafe family situation, today is your day. There is now a single number you can call – a single place you can go to get all the help you need. That place is the FJC by CASA.
. . .