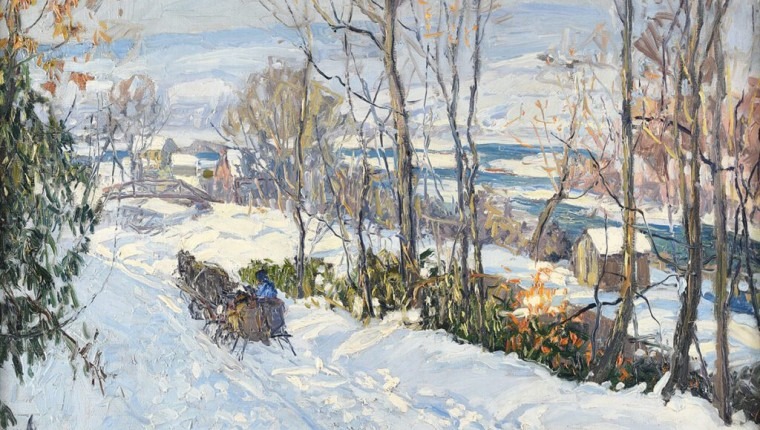 Talk about making an impression.

The Polk Museum of Art at Florida Southern College in Lakeland just opened a compelling exhibition of works considered modern and even radical more than a century ago.

American Impressionism: Treasures from the Daywood Collection, on view through late October, includes more than 40 landscapes, figure paintings and still life by early 20th-century artists from across the United States.

“In their own time, and perhaps shockingly to our eyes today, these American Impressionist works were the most contemporary, cutting-edge and avant-garde examples of ‘modern art’ ever seen in the United States up to that point,’’ says Dr. Alexander Rich, the museum’s Executive Director and Chief Curator.

While many people view Impressionism as a 19th-century European movement inspired by Monet, Degas, Renoir and others, it influenced a new generation of artists in other countries. American painters studying in Europe in the 1870s and 1880s saw Impressionism in its prime – and unlike anything they had seen back home. But what they created was hardly a derivative or imitative movement.

“Those artists took the lessons of French Impressionism back across the Atlantic with them as something brand new,’’ says Rich, who serves as chair of the Department of Art History and Museum Studies at Florida Southern. “They applied the realist focus of Impressionism both to their own decidedly American subject matter — capturing identifiably American cityscapes, landscapes, seascapes — and in their training of the next generation of art students.’’

The exhibit includes works by George Inness, Edward Willis Redfield, W. Elmer Schofield, Charles Webster Hawthorne, Charles H. Davis and many others who sought to capture the interplay of light and shade, but with bolder colors and brush strokes than their French predecessors. All were interested in the essence of a subject more than exacting detail.

These artist sought scenes from daily life, with much painting done in the outdoors en plein air style. Many works depict townscapes, rolling hills, snowy streets and portraits of common people. At its core, Impressionism helped liberate the artist from the formal trappings of previous styles and movements.

“The idea of focusing on scenes of everyday life, sketching impressions of those scenes out of doors – and then framing and exhibiting those ‘sketches’ as completed works of art without turning them into finished, academic, studio-made paintings was audacious and groundbreaking,’’ Rich adds.

The exhibition is from the acclaimed collection of the Huntington Museum of Art in West Virginia. However, the paintings are originally from the private collection of two patrons of the arts in that state, Arthur Dayton and Ruth Woods Dayton (whose surnames combine to create the collection’s name “Daywood.’’ It underscores the importance of many private collections that later became part of public museums and their mission to educate and enlighten.

This exhibition shows how patrons like the Daytons helped American Impressionists claim their niche, survive as artists, enjoy acclaim – and help put the art of the United States on the global map.

“I believe wholeheartedly that American art finally comes into its own with the advent of American Impressionism,’’ Rich says. “Although the style may find its roots in France, it’s not until American artists find the freedom and encouragement offered by Impressionism — that it was okay to paint ‘impressions’ of the real American world they see each day — that American art gains its modern, documentary power.’’

The Polk Museum of Art, 800 E. Palmetto St. in downtown Lakeland is just about an hour’s drive from Pinellas and offers programs such as Curator Tours, Museum After Hours, Gallery Talks and special events. For details visit PolkMuseumofArt.org

The museum’s COVID hours are Tuesdays through Saturdays, 10 am to 3 pm, closed Sundays, Mondays and major holidays. Admission is free.