Further Down the Road

Living Color: The Art of the Highway Men

which were the ones they saw, lived amongst and dreamed beyond
. . .

. . .
that is what many young people do, they see beyond their “ignorant present”
some make literature, Zora Hurston, some others paint, Al Hair,

these artist give us more to hear and to see
“Let your mind wander,” Al Hair exhorted his colleagues
Al was the seminal painter, one of the few who had apprenticed under A. E. Backus
Al Hair was the centrifugal creative force that the young African American painters made their orbits around and their own trajectories… from

.. . .
these painters came to be referred to as the Florida Highwaymen

they sold their paintings door to door
to residents and inhabitants of the state
from insurance companies to savings and loan offices
to folk (tourist people) headed further South and other folk going North
North, to places like Vermont, Maine and New York

to places where the landscapes did not resemble the verdant, fecund ramble of South Florida
. . .

. . .
they sold their paintings, some 50 thousand plus
“running the road”
from the back of their cars
wearing out shoe leather
along the byways and the highways of
the Jim Crow South… “Living Colored”

sometimes the paint was not yet dried, sweat still on the canvas
decades later, now highly coveted and collected
. . .

. . .
the momentum of one day’s painting effort would spill over to the morning of the previous day…
the evidence of things not seen

The Florida Highwaymen gave us more to see
These pictures are emotional, insistent, and utterly captivating

The sky some several thousand feet above the earth
encircles butterscotch hued sun-sets and sun-rises
the cumulus nimbus clouds like bruised buttered popcorn
hovered (hushed) above the landscapes
a menace for sure, but not a Black one
. . .

. . .
you see, many of these paintings were often devoid of Black figures
occasionally they appeared, but only on occasion
more ubiquitous were the trio of bent (torqued) palm trees
swaying as equally to the right as to the left
with a rhythm that “spoke” of
Muddy Waters, Howlin’ Wolf, Sam Cook, Ray Charles and Etta James,
at last… sexy, ferocious, a riot of hues, pigments, motion, stillness
and yes, hush
. . .

. . .
James Gibson’s untitled (Moonlit Palms) suspended above the water, unseen Moon
bathes a trio of palms with a backlit menace while a gaggle of egrets
illuminated like snowflakes in the far distance, wing their way north.
. . .

. . .
Hot, verdant, expectant, and oh so color-full and filled with color, Roy McLendon’s
(untitled) Backcountry pond at sunset, the sun in an artistic blaze of virtuosity
never really sets and the temperature never falters.

The beautiful painting is warm on the eyes.
. . .

. . .
Al Hair who did not live much beyond his thirtieth birthday, was a very prolific artist.
and no two or ten paintings of his are exactly alike
each canvas has its own meditation, its own knowingness, its own jazz if you will
. . .

. . .
nonetheless his fidelity for capturing what he saw in the landscapes of his youth and conveying that passion
to a host of likeminded artists and painters has created a lasting and delicious legacy,
which moves everyone of us when we look at his work and that of the other Highwaymen
to wander further, further down the road, Further down the road to Praise House…
where we all hope to be received
. . .

All photographs by Tariq Gibran 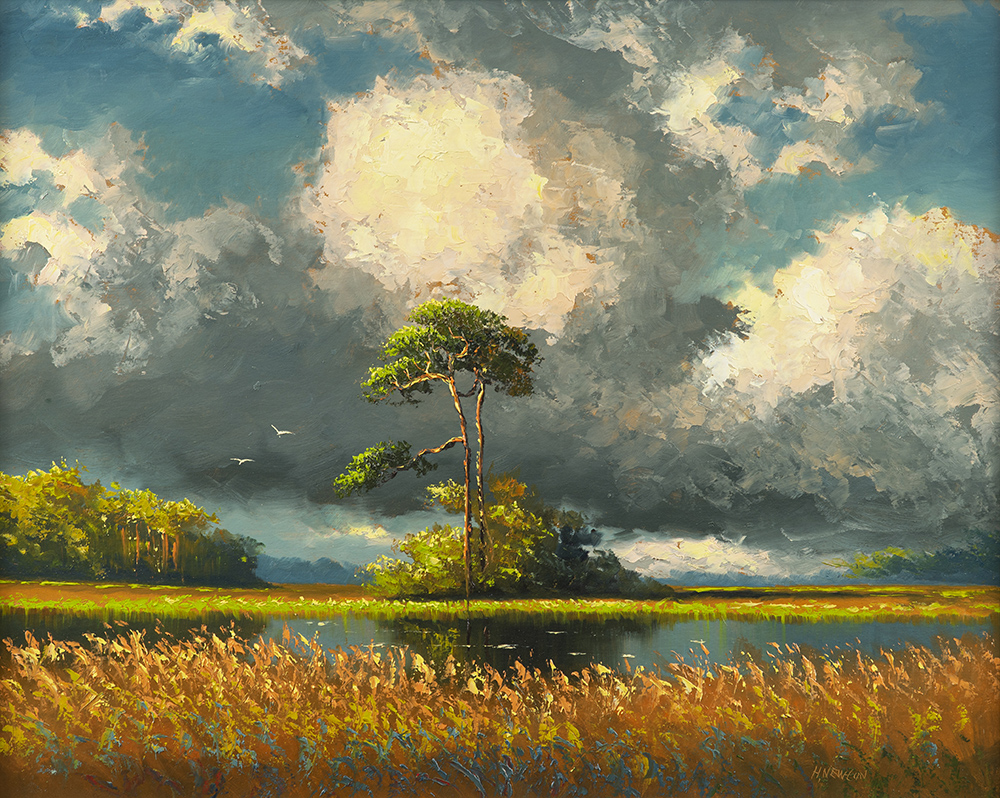 Harold Newton, Untitled [Backcountry pine against a building thunderstorm] n.d. Oil on board 23 ¼ x 29 ¼ in. Courtesy of the Asselstine Collection © Harold Newton.