I’m working on a film right now about HIV.  You might remember HIV by another name. We used to call it AIDS.

If you were alive in the 1980s, you knew the grim statistics. Someone you knew had it. And if you did not know someone, then you knew someone who knew someone. And they all died.

Today, those with HIV are called long-term survivors and they are living long lives, thanks to anti-rhetroviral drugs that stop the HIV virus from replicating. The HIV virus is an evil and opportunistic scavenger – a ripoff artist. Upon entering the host body, it attaches itself to a cell, stealing the cells own DNA identity, then deceiving the host cell into believing that it is just another friendly cell, a cell just like the host. This clone of the host cell then replicates and this process of duplication repeats itself – not once, but over and over and over.

Here’s what HIV looks like. It is hard to imagine something as pretty as a flower can do so much damage. 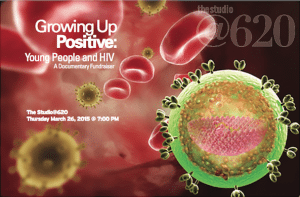 This was a postcard from 2015, back when I started this film through funding from University of South Florida and University of South Florida Saint Petersburg. I screened the work-in-progress at the Studio@620. The long-term survivors were there to speak after the film. They were all in their early thirties, they were born with HIV, mostly to moms who were no longer alive. Growing up with HIV was not the easiest life for our long-term survivors but they were thrilled to finally share their hidden lives with others. They each said that by appearing on camera, and by talking to the audience about their experiences, they felt like they had been set free from HIV. They were no longer victims of the stigma of HIV.

I have received additional funding from The Florida Division of Cultural Affairs, and now this artists’ grant from Creative Pinellas. The film is not yet finished. It’s at the top of my list of projects to complete before the 2018 school year starts (yes, I have a short list of three).

One thing that is no different now than it was in 2015: HIV rates are rising. In fact, Florida has the highest rate of HIV infection in the nation.

Florida, we have a problem. Wake up.

In the American South, HIV rates are rising rapidly compared to regions whose cities were once the epicenters of the HIV epidemic – New York and California – but have since fallen dramatically.  Scientific American magazine cites poverty, lack of health care, and cultural and religious attitudes against homosexuality in the Deep South – the former cotton Belt – as reasons HIV goes untreated and then spreads.

There is no geographic or deeply-ingrained cultural reason why Florida – not a Deep South state – has the most HIV-related deaths. There is no lack of health care. Cultural and religious attitudes are not as conservative as in the rural Deep South, they run the gamut from conservative to liberal. But the state remains high on the HIV list.

And Florida is doing very little to outreach to young people.

I continually encounter people who have no idea that Florida’s rates of HIV are so large, and are rising.

As a filmmaker, as an artist, I can do something. It’s my goal to spread the word.