“Florida on My Mind”

“In February, one day, I found myself sad to the bone. A man had been appointed to take care of the environment even though his only desire was to squash the environment like a cockroach. I was thinking about the world my children will inherit, the clouds of monarchs they won’t ever see, the underwater sound of the mouths of small fish chewing the living coral reefs that they will never hear.” 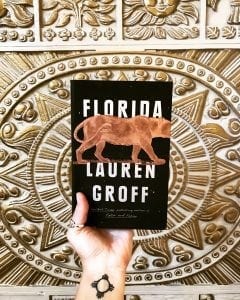 Last night I finished “Florida” a collection of essays by Lauren Groff. Her newest literary work doesn’t so much highlight a literal setting but instead imbues an atmosphere filled with looming feelings of a dystopian future. The above excerpt from the passage “Snake stories” is a perfect example of how Groff has successfully captured a portion of our societies current sense of solastalgia and dread—especially mine.

I’m a big fan of ‘The eden of dangerous things’, otherwise known as “The Sunshine State”. Some of my best childhood memories include romping through a key lime and mango grove that we lived nearby when I was 8 & 9 years old. This was the same property where wild orchids and tree snails lived abundantly. It was also a period of time when my father was a Park Ranger in the Florida keys, which enabled us to spend almost every afternoon biking through the mangrove trails and snorkeling above the coral reefs. I learned about plant identification. My dad showed me how to chew on sugar cane and I watched my mom grow an assortment of native Florida plants in our back yard. I had a collection of insects I carefully curated, all being insects that many peers and adults labeled “gross, ugly, and creepy”. Some of the insects (which were kept in old medical jars my mother brought home from the Dr.’s office she had worked at during that time), included: Spiny orb-weavers, Palmetto bugs, & Centipede’s. I was an amateur entomologist and empath in training. I often drew these creatures from observation and many of my drawing included an alligator or two. Those years molded me and my appreciation for ALL living things—especially the unique creatures that make up ‘Southern most’ state. 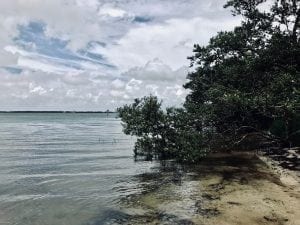 In Lauren Groff’s “Florida”, she often revisits the feelings of fear and danger by incorporating creatures such as snakes, cougars, and alligators into her various female narratives. She does this thoughtfully, by not so much as alienating these creatures or demoting their worth, but instead using them as useful symbolism, especially during a time when life feels very uncertain and menacing. She’s also developed characters who often refer to the state of Florida with contempt. Some of which are tired of the culture of Vacationland and the seclusion of living in the suburbs that once used to be swamp land and/or cracker style houses. Each exhausted by the complexity of what it means to be a Floridian– a title proudly owned by those that feel a magnetic to pull to a time that no longer exists. A time when walking through miles of quiet pine flatwoods wasn’t an hour drive away. A time when swimming in rivers meant swimming side by side with manatees. Before the algae bloom. Before Roseate spoonbills and Storks became imperiled. When Osprey nests outnumbered the porches of condo’s. When the scent of orange blossoms and jasmine owned the night. 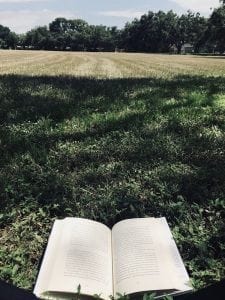 I spent most of this past week feeling my feelings. I sat. I ruminated. I read. I felt hopeless. I became one of Groff’s subjects. I felt myself disconnecting from the “social world”, i.e. Facebook, instagram, the internet… all things electronic. I spent my lunch breaks taking walks through nearby parks, trying to reconnect through nature and its fractional amount of acreage this county has set aside for such. I sat in a field under an oak and became lost in Groff’s “Florida”. I was filled with nostalgia and an equal amount of hopelessness. It was an ‘off’ week.

In hindsight i’ve come to appreciate all of this. The pessimism. The melancholy. The heaviness of what it means to truly love a place for its natural allure, but at the same time mourning of the destruction of its heritage. I’m anguished over the fact that the things that make it beautiful have become a target of destruction for those who view it purely as a real estate commodity—those with money and status—all in the name of tourism. No matter how much it hurts to lay witness to this—too see so many species become threatened, I will use my art as a tool for advocacy against this prevailing consumerism culture.

For the past two years, since returning “home”, i’ve been challenged by the desire to create art that properly expresses these observations and feelings, and why this is all important. I’ve been creating a variety of studies of Florida’s creatures and ecosystems, but grazing the surface of what i’d really like to say. Reading Groff’s book helped put a lot of these things in perspective. The core of all this being: that the natural world which is all encompassing & all important is being relegated to the past—a place of memory—at an intensifying pace. We are witnessing the demise of unaltered nature. We are disconnected.This is the direction I will be taking my newest body of work in the following months.