Generally, when we think of drawing we envision a line being applied to the surface of choice. The line is the positive space while the surrounding background is the negative space. One of the things I enjoy is reversing that process, using a reductive style of drawing by which the usual positive space becomes negative and negative space becomes positive. Either by scratching or drawing through the applied medium with the end of a stick of some sort or by erasing, the effect is pretty cool! 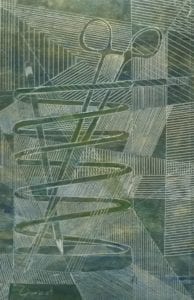 For several years I worked almost exclusively using the reductive method on a special surface. Layering oil pastel on YUPO, a synthetic paper, I would then use an implement to scratch through the pastel layers to reveal the paper surface. Old credit cards are terrific to use; I have even used a metal shelf bracket – it is dependent upon the kind of line one is interested in creating and what tools are available. The image on the right, titled “Pencil Holder,” is indicative of the reductive linear style I was in.

The YUPO brand paper was developed for commercial purposes in Japan in the 1960’s, arriving in the US in the ‘80’s. It was only in the early 1990’s that the material was discovered by artists as a desirable surface both for drawing on and applying watercolor. The latter because it doesn’t absorb color like traditional watercolor paper. In fact, watercolor literally floats on the YUPO surface and the colors really glow. It is heat sensitive so if one is interested in sculptural forms a heat gun can be applied to it, creating amazing shapes.

Graphite on YUPO is also a seductive combination. When working with the reductive drawing method, powdered graphite is wonderful to use. A YUPO surface covered with powdered graphite which is then burnished to give it a smooth, pewter-like appearance. An electric eraser works well on large surfaces, taking some of the stress off the joints in one’s hand.

I am using the reductive method on oil pastel applied to YUPO for the piece I am creating for the Emerging Artist Grant project. It has been awhile since I have worked with this combination, and I’m looking forward to the process.