I am honored to announce my mentor: Carol Mickett and Robert Stackhouse. Yes, you are reading it correctly, it’s a two for one mentorship.

Their’s is a collaborative relationship in the studio, with their work making its mark in the public art arena locally, nationally and internationally. As described on their website, over the last ten years “…they have produced large-scale sculpture, painting and prints, many of which have been commissioned. Their collaboration is one in which both artists work on all aspects of their projects. Mickett and Stackhouse have chosen to work together because they push each other beyond their comfort zones to do work that neither of them would attempt individually. Mickett comes to the collaboration from a background in philosophy, film, radio, poetry and theatre. Stackhouse followed a traditional visual arts path and his individual work can be found in museum collections around the world.” A wonderful overview their projects can be found at https://mickettstackhouse.com/ 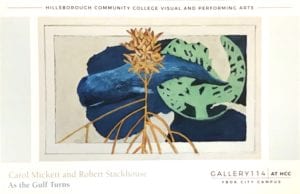 I had met Carol and Robert a few times through other venues. The last opportunity allowed me to get to know a bit about their artistic personalities through their current exhibition, “As the Gulf Turns,” at Gallery144@HCC, located on the Ybor City campus. Focusing on climate issues, in particular the warming waters of the Gulf of Mexico with its current and long term effects, the show pulls together the creative interpretation of several years of interest and research on the topic.

Carol, whom I’ve met with thus far, is observant, with the gift of listening carefully and then drilling down to the essence of an issue. As a result, the direction I thought I might be taking during this grant period has shifted; I’ll be drawing on the inspiration of some of my earlier work coupled with some of the thinking behind my current work.

I wanted to be challenged and that is exactly what I am getting!

Check out the following link to learn more about the Gallery114 exhibition, “As the Gulf Turns”: