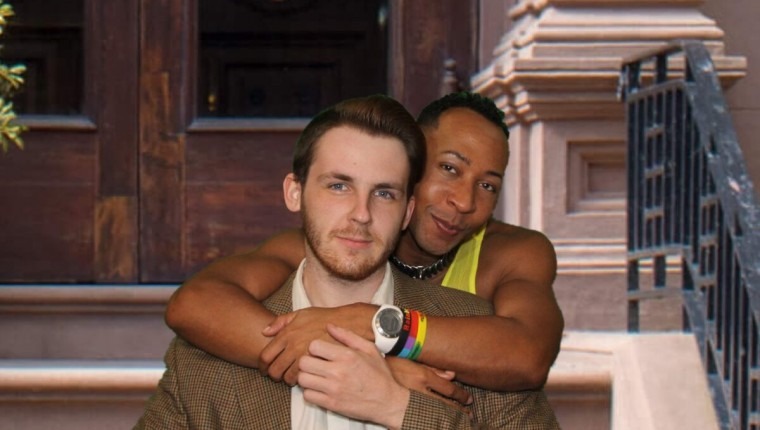 Rolling Stone, a newspaper in Kampala, Uganda, published 100 photographs of gay Ugandans without their permission in 2010. Advocacy officer for Sexual Minorities Uganda, David Kato, was one of the pictures printed on the front page.

Atop the headline was a small yellow banner that read “Hang Them.” David Kato and other activists sued the newspaper for publishing their names and photos and won. David was beaten to death on January 26, 2011, in his neighborhood.

David Kato was a founding activist and contributor in Uganda’s Gay Rights Movement. During an interview that David gave in 2009, he says that he intended to be a “good human rights defender; not a dead one, but an alive one.” October 13, 2009, Member of Parliament David Bahati introduced an anti-homosexuality bill, which proposed a new capital offense of “aggravated homosexuality” which was punishable by life imprisonment. Repeat offenders would face the death penalty, while other Ugandans would be required to report homosexual activity “within 24 hours” or face police action themselves. If the accused were HIV-positive, they could also be sentenced to death.

Despite the bill being overturned due to a technicality, the Ugandan parliament still manages to sneak anti-gay language into bills today. And David Bahati still sits as a member of Parliament.

Now, I know you’re wondering why I made you skim old Ugandan politics today when this is an Arts Feature. Did I send the wrong article to my editor? The short answer is no, the long answer being that sometimes Art comes with a side of activism.

Outcast Theatre Collective is a Theatre based in Tampa nonprofit I’m a member of, that operates “at the intersection of art and social justice.” With a mission to “enhance local theatrical diversity by facilitating the professional development of artists from marginalized communities,” Outcast is a place where outcasts come to feel welcomed and encouraged in their art.

Oftentimes, collective members share stories of experiences where they felt isolated or affronted. The collective then collaborates on incorporating those stories into scenes that they perform as forums before audiences or in solo performances.

This weekend, Outcast is presenting the World Premiere of Dionysus on the Down Low by Michael Proft. Michael Proft is a graduate of New York University’s Tisch School of the Arts Dramatic Writing Program. Dionysus on the Downlow was a finalist for The Playwrights Realm Scratchpad series in NYC and was a semifinalist for both ScreenCraft’s Stage Play competition and The Eugene O’Neill National Playwrights Conference.

David Kato served as inspiration for the playwright for one of the main characters, David Okello, after watching a BBC Documentary called The World’s Worst Place to be Gay and another documentary, Call Me Kuchu. Inspired by a Ugandan’s story of seeking political asylum in Sweden, Proft wondered what it would be like to leave your home by threat of death only to be thrown into an unfamiliar community and culture. Dionysus on the Down Low takes place in Boston after David Okello, played by Theron Butler, flees Uganda in the wake of the proposed anti-homosexuality bill. Matthew Teitman, played by Jonathan O’Brien, an LGBTQ+ advocate with the ACLU helps David obtain political asylum. Personal, political and sexual tensions rise as two men with disparate cultural values and desires struggle – sometimes explosively – to find common ground.

“The story is beautiful and it’s wonderful to see two gay characters as the main storyline, rather than an add-on or afterthought to the many mainstream heterosexual stories and plays done for the masses,” Theron Butler shared with me shortly before the opening.

Butler brings exuberance and light to this show from the moment he enters the stage. I was curious as to how he started this process and journey with this play since his character is loosely based on a real person. Having thoroughly enjoyed his research into the real David and learning about life in Uganda, he shared that it was “a very eye-opening process for me. It gave me a great personal appreciation and a deeper understanding of my privilege, having been born in the U.S. and being out, even as a minority.

“I also developed an immense amount of respect for someone who was able to be so courageous in the face of incredible pressures and hatred for simply existing as a human who loves another human.”

As a lover of theatre and as someone who has spent the last eight years of schooling studying it, I’m always hungry for how others approach a role. What surprised me most from Butler’s interview was that he spends his days behind a desk, so he must increase his level of physical activity to “get back into the 34-year-old body” of David Okello, who has “a lot higher energy level than me.” Without surprise, the show is very demanding – as you can assume from the serious topic. But it is also filled with love and humor enough to set your sides into a stitch. “This show goes through many different levels and is an emotional powerhouse for David,” Butler told me.

And, just in case you were wondering, yes, Butler absolutely kills at a Ugandan Dialect. Part of his professional training included dialect work, so he enjoyed blowing the dust off of his dialect books and practicing the key concepts of voice work. “It needs to feel unique and organic to who that character is – it’s not just about trying to sound like what your ear may hear when someone else does that dialect,” he shares.

My favorite part of this show is watching the relationship between David and Matthew develop. Matthew Teitman’s name is descriptive of his willingness to submit or change at the beginning of the show. And it’s true – he’s tightly wound and often refuses to budge. “We see David and Matthew try to figure out if love is enough to hold them together despite their differences. As Matthew and David navigate their burgeoning romance, society’s inequities infiltrate their safest spaces and force us to confront the ways in which structural inequities are reflected in interpersonal connections,” the director of the show, Clareann Despain, tells me. Clareann discovered this play after an actor she had worked with previously introduced her to the script after a staged reading of it was performed at Carrollwood Players. Theron Butler was in the staged reading. She read it right away and knew she had to direct it. She told me, “It has been an honor to direct the world premiere.”

The play isn’t just calling out Uganda, either, “Recently in the U.S. – and in Florida particularly – we’ve seen a rash of anti-trans legislation which is a testament to the persistence of anti-queer sentiment here at home,” Clareann explains. “As activists said at the funeral of David Kato proudly declared, “A Luta Continua” – the struggle continues.”

I spoke to Nadalia Hiraldo Morales about some of the processes involved in designing the costumes. After procedural talks with Clareann on her thoughts directorially and speaking with the actors, Daly researched Ugandan clothing, culture and traditions to incorporate in her design.“I throw in some color theory to tell a story, then patterns, and then prints to represent each character’s personality. All that combined brings the whole design to life!”

She did a great job telling a story with textiles because it brings the space and the characters to life in such a visually stunning manner. Keep your eyes out for Daly’s favorite costume: “David’s outfit in the drag scene is designed after traditional Ugandan clothing based on the dance he performs onstage. Being able to bring so much of Uganda into the play in many subtle ways to honor their culture and heritage was very rewarding.”

The production is a stupendous showcase of the genuine heart and diversity of Outcast’s talents. A visual artist and member of the collective, Pamela Bulu (@pbulu.art), created an original piece of eye-catching artwork that hangs on the stage’s set.

deBowat Reveur composed an original song, ‘My Suga,’ that’s referenced in the script. Jules Moore created a fun and beautiful soundscape. The collective came together to build the gorgeous set. “

T.R. Butler is an original member of Outcast and he’s turning in a performance for the ages as David Okello. Linda Edmundo, also a member of the collective, is grounded and vibrant in her portrayal of Naome Ssempa. Jonathan O’Brien is new to Outcast – but we definitely want to keep him – he’s wonderfully charming even as he genuinely embodies a tightly-wound Matthew Teitman.  Gloria deLuna is also a new face and her Ina is hilariously real – she will remind many of their own mothers,” Clareann adds.

When I asked Butler if he had anything else to add, he told me this, “For the LGBTQ+ community, please come and support this show! The more we support our art and the stories that resonate with us and show ourselves onstage and screen, the more choice, acceptance and equality we can gain here and abroad!”

Metro Inclusive Health will be making an appearance on Sunday, July 25 before the show from 1-4 PM to provide free and accessible HIV testing in the Stageworks Theatre parking area.

Join the cast, director and special guests after every performance
for a discussion about the play and relevant social issues.

“Equity and access are at the core of our work as artists and as a collective,” explains Clareann. “We don’t want the cost of the ticket to present a barrier to attending a live performance.  So, we started a program to increase access to our shows.”

Community Access Program tickets are first-come, first-served and are limited to one ticket per show per person. Simply email Outcast at cap@outcasttheatre.org and write which performance you want to attend, and what you want your ticket to cost. Outcast will send you a promo code for use on Outcast’s website. No documentation or explanation is necessary. “We trust folks want to support the arts monetarily when they can.”

We know that members of our community believe in accessibility, too. Outcast seeks community donors who want to sponsor these tickets. If you would like to support Outcast Theatre Collective and their Community Access Program initiative, you can email admin@outcasttheatre.org for more information.

Ticket information can be found at outcasttheatre.org/dionysus