I’m flying out to Colombia tomorrow, during one of the most difficult times the country has experienced in the last ten years or so. People are so desperate with the current situation in the country that they have taken to the streets to protest the presidents appalling job and rampant corruption in the middle of one of the worst moments of the pandemic. There have been protests every single day for two weeks, with dozens of dead people, and hundreds missing. People are finally waking up to a government that has left them in squalor by inculcating fear of socialism, of the country’s ending up like Venezuela. 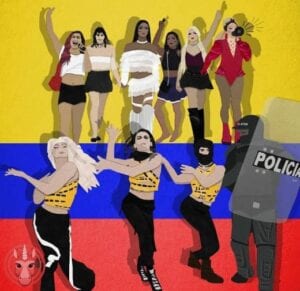 I haven’t lived in Colombia in twenty years or so, but I know this: Colombians have endured everything. Anything awful you can think of, Colombians have been through it. Colombians are resilient and kind and decent, no matter what the news has said for decades. We have suffered a five-decade civil war, colonialism, and drug cartels, and we have left many dead behind. I have lost several uncles and a cousin in the midst of all, and even through it all, I still love the place. I long for it. I can’t stay away, and I’m so happy to see my family and my people again after two years.