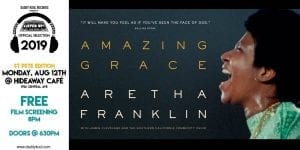 Aretha Franklin did not want you to see Amazing Grace, the concert film that captures her transcendent 1972 gospel performance at the New Missionary Baptist Church in Los Angeles.

She sued multiple times to block the film from release. In heaven’s name, why? It’s hard to say for certain, but the best clue comes from bassist Chuck Rainey, who played bass in the concert band and spoke to Aretha a couple of times a year until she died in 2018. According to a New York Times article, she told him she didn’t like the film — despite saying publicly that she did — and felt it was “more about style and celebrity than music or worship.” Reports say money negotiations were also involved.

Aretha’s death at age 76 last August 18 shook the music-loving world, but also opened the gates for this remarkable movie to find its way to screens. Amazing Grace brings its holy-roller fervor to St. Petersburg in a free showing at the Hideaway Cafe at 8 p.m. on August 12 (doors open at 6:30). It’s part of the local Listen Up Film Series, and is presented by Daddy Kool Records.

Amazing Grace sees the light because producer Alan Elliott, who acquired the footage from Warner Bros. Films in 2008, convinced the executor of Aretha’s estate to allow the release of the film, which debuted in New York and L.A. late last year. 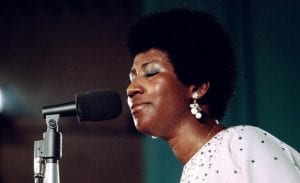 In the early ‘70s, African-American music and other arts were flourishing, and concert films (Woodstock, Monterey Pop) proved box office successes. Aretha, then 29, was already the Queen of Soul, widely regarded as the greatest pop vocalist alive. Her record label, Atlantic, deemed a return to gospel an apt way to reclaim her roots and expand her appeal, while not conflicting commercially with her secular material. They decided to film it.

Warner Bros. hired Sydney Pollack, coming off a hit with They Shoot Horses, Don’t They?, to direct, even though he had no experience shooting live music. Aretha brought in an ace rhythm section from New York. The Rev. James Cleveland, a gospel luminary, assembled a 25-person choir, and acted as music director and pianist.

The two-night performance was a rousing artistic success, with Aretha in absolute full throat, unbound by the relative restraint she employed in her pop material. Take, for instance, “What a Friend We Have in Jesus,” which many of us remember as a corny little tune we sang badly in Sunday school. Here it’s transformed into a rollicking six-minute shuffle marked by tidal waves of dynamics. Aretha and the massive choir bob and weave to steadily raise the temperature.

The title song bears little resemblance to the version you may have sung in the pews. Performed at a glacial pace sans drums, with piano and organ weaving a tapestry underneath, Aretha teasingly extends notes, counters them with pregnant pauses, and routinely reaches to, yes, the heavens for astonishing high notes. She improvises phrases, prompting the audience into spontaneous call-and-response eruptions, skillfully moving the song to a rapturous crescendo. 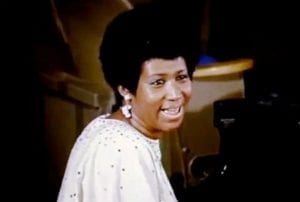 Disclosure: I have not yet seen the film but have listened to the Amazing Grace album, which was released in ’72 and happens to be the best-selling gospel LP of all time (and is also Aretha’s biggest seller). I’ve also seen several short clips from the movie.

The church was sweltering on those nights, even in January. Aretha’s face glistens with sweat, but she remains coolly composed throughout. The emotionally wrought audience, however, was moved to jump up and shout, weep and wipe away tears, erupt in ecstasy, dance frantically and indulge in all manner of don’t-care-who-sees-me histrionics. Judging from the clips I’ve seen, the crowd reaction shots add vital emotional heft to the movie. A couple of white longhairs make the final cut: Mick Jagger and Charlie Watts, who were in L.A. finishing Exile on Main Street.

So why did it take 46 years to release Amazing Grace, a film that would have accompanied and likely enhanced the sales of the best-selling gospel album ever? Because Pollack and his crew forgot to use clapperboards, which meant the footage could not be synced with the music. The director attempted to match them by using a lip-reader, but gave up after six weeks, and the film was consigned to the vault.

After acquiring the materials, Elliott, the producer, was quickly able to sync the sound and visuals using digital technology. Amazing Grace sat unseen for several years, until Elliott managed to convince Sabrina Owens, Aretha’s niece and executor, that the film was too important to leave in the can. Elliott reportedly mortgaged his house a few times to acquire the film. You might say he approached the project as a sacred mission.

Amazing Grace has earned rhapsodic reviews. Wesley Morris in The New York Times declares it “obviously one of the great music films.”

“Word has it that good things are worth waiting for,” writes Peter Travers in Rolling Stone. “This shining light of a film proves it.”

K. Austin Collins in Vanity Fair says the Amazing Grace “has the unquantified ability to reach directly into the soul that only great art approaches.”

And sayeth Odie Henderson in rogerebert.com, “Whether you’re religious or not, you owe it to yourself to see this movie if the chance arises.”

That chance has arisen.