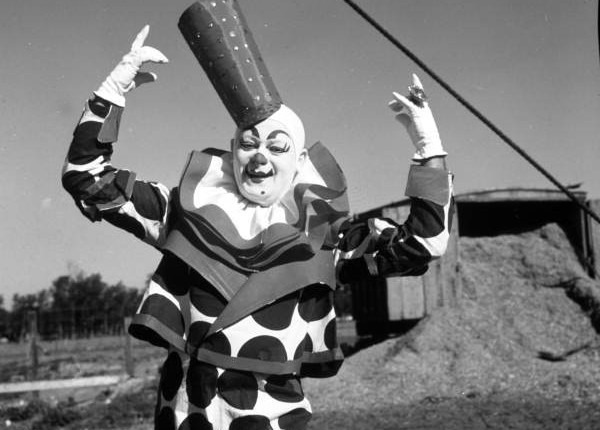 . . .
Author Deb Carson has had a rich and multi-faceted education and career in the arts – singer, musician, photographer – and most recently, journalist and author. She made her living and supported her artistic pursuits through marketing.

It was in this mode that I met Deb several years back, when she was marketing director for the historic Palladium Theater in downtown St. Pete. Little did I know at that time, that a fascinating story was ruminating in her creative mind – one that paid tribute to her beloved great-uncle Albert White, a star clown for Ringling Brothers Circus. Albert was a larger-than-life and much adored figure throughout Deb’s childhood and formative years. He passed away in 1974 when she was still a teenager.

As close as they were, even Deb could not have imagined the secret that was revealed to her some 38 years after Albert’s death as she pursued a master’s degree at USFSP in 2012 – a truth that catapulted her uncle’s already fascinating story from fun and colorful fame to one of remarkable courage, resilience and victory over unimaginable odds.

That story became Deb’s thesis, then an article – and now, lucky for us all, a page turning book – Becoming FLO… A Mostly True Story. I can only speculate, but truly believe, that a play or a movie, or both, is the natural course that this beautiful story merits – almost demands.

It’s the story of finding a safe place to be who you are – sheltered behind the make-up of a clown.
. . . A Survivor from the Start

Albert White was born Abraham Isadore Meyrowitz in 1903 – a first generation American born to devout Orthodox Jewish parents who had escaped violent, antisemitic pogroms in western Russia’s Pale of Settlement. The family emigrated to America and settled in Baltimore.

Though safe from the carnage in eastern Europe, antisemitism was not exactly an alien concept in America. Couple that with the lofty expectations of a very conservative father and you can imagine the challenges baked into this young boy’s existence.

But a much bigger storm was on the horizon and closing in.

One day, five-year-old Abraham announced to one of his sisters “God made a mistake! I should have been born a girl.”

This declaration, along with his feminine demeanor, increasing obsession with ballet, opera and costume design, infuriated Abraham’s father, Theodore. The verbal and physical abuse became vicious and unrelenting – only escalating with time. Though living in the US, young Abraham was not spared pogrom-like violence – but the assault was launched by his own father.

So, what does a 16-year-old do to stop the cycle of unbearable violence in his life once and for all? Well, he runs away and joins the circus, of course!

The Lamont Circus, one of many traveling shows in the early 20th Century, came to Baltimore. Against her husband’s express command, Abraham’s mother, Ida, brought her children to the circus – perhaps realizing that bringing her son some joy in a life now defined by pain, surpassed her fear of the consequences of such defiance.

A chance backstage meeting with a clown named Christian who was escaping the dysfunction of his alcoholic parents in Georgia, painted a picture that embodied almost every dream Abraham had, and brought into sharp relief that a better life was not just a dream, but a realistic possibility.

When the circus train left Baltimore, Abraham was on it.
. . .

Knowing his birth name wouldn’t fly with circus management or the public, Abraham henceforth became known as Albert White. This would be the public declaration of a new life and identity.

However, the most profound evolution, a more personal reach for self-truth, was still a closely held secret.

Over time, Albert became an expert costume designer, reveling in all the sequins and colorful silks that were the accepted garb of any good clown. Choreography, singing and funny bits came naturally to Albert – a born entertainer.

As Albert’s talent brought him to larger and larger circuses, he often had the opportunity to portray female characters – first as a bearded lady on the midway for Lamont until reaching the center ring as a clown for Cole Brothers, and ultimately Ringling, the gold standard – donning the geisha-like makeup that had become his signature look – a look inspired by his favorite opera, Madame Butterfly. But clowns in drag were hardly unusual.

Albert knew, however, the true source of this inspiration. When he spoke to himself, with no one around, it was “Flo” conducting the conversation.

Flo was the woman, the truest expression of self, that Albert had always known was inside. But for now, Flo’s true identity – outside of her performances – remained locked inside.
. . .

It was the late ‘40s, when Ringling came calling and Flo’s star continued to skyrocket. She became a marquee performer, even appearing in two Hollywood movies – Jumbo with Jimmy Durante and Doris Day, and The Greatest Show on Earth with Charlton Heston and Cornel Wilde – the latter, a Best Picture Oscar winner. Throughout the 1950s and ‘60s, there was arguably no clown more famous than Flo.

By this time, a close inner circle of friends knew who Flo really was. The circus was a sanctuary for many with secrets of their own – all the marginalized “others” seeking the support and unconditional acceptance that could never be found in open society.

. . .
Years earlier, after her father’s death, Flo was able to re-establish close relationships with family, though for the most part it was Albert that spent time with them in Baltimore and ultimately Sarasota – Ringling’s home base.

This was the great-uncle Albert that Deb knew and relished spending time with – the one that put clown make-up on her and her younger sister, cooked elaborate Christmas feasts and regaled them with stories of his circus adventures. What child wouldn’t think that Albert was the coolest person alive?

. . .
Flo Finally Comes Out to the World

Deb Carson was a grad student at USFSP in 2012, and wanted to research her uncle’s remarkable life – a deep dive. “History scholar and journalist Gary Mormino was truly pivotal in helping give me the direction I needed,” says Carson. “None of this could have happened without his help.

“But it was when I visited one of Uncle Albert’s fellow clowns and close friend, Jackie LeClaire, that I finally learned about Flo.” LeClaire was also a Ringling star who passed away in Sarasota at the age of 91. “I will be forever grateful to Jackie for introducing me to Flo and sharing so many of her stories,” says Carson. “He revealed to me, not just a remarkable talent, but a true hero.”

“Flo succeeded in overcoming her boyhood agony and lived an incredible life despite all odds,” writes Carson. “Such a remarkable story needs to be told. And shared.”

As Deb Carson shares Flo’s much treasured professional make-up kit with attendees of her St. Pete Beach Library stop on the book tour, it is clear to all that she did inherit the “Flo” gene.

On a personal note, as a descendant of pogrom and holocaust victims and survivors myself, as well as mother to a 30-something non-binary drag performer, I can only feel gratitude for those like Flo, who had the courage to find a way to be who they were in far less tolerant times – making it possible for people like my child to be who they are today – out of the closet, and in public.

Copies of Becoming FLO are available by contacting
the author at DebCarsonWrites@gmail.com