The “golden garage” scene from 102 Degrees

It had rained all day. Nuñez, the artistic director of Tampa City Ballet, her troupe of 14 dancers and a six-person film crew had been idling for hours in a muggy Ybor City parking garage, hoping to shoot a segment at sunset on the roof. It was the second day of a low-budget, four-day shoot for the company’s short film, 102 Degrees, and it was looking like a wash.

The rain stopped. Around 7 p.m., a warm light wafted through the second floor of the garage, shimmered off the wet concrete floor and radiated a golden glow. Suddenly aware of an opportunity, Nuñez and company hustled together an improvised set and managed to capture a rapturous two-person dance scene before the special light faded.

Two months later, Nuñez was still awed by the moment. “That day was magical,” she said by phone in September.

The entire terpsichorean cinema project was in many respects a feat of prestidigitation. For starters, why was a small independent dance company making a movie anyway?

In a certain regard, the answer is obvious. Deprived of the opportunity to perform live due to the pandemic, Tampa City Ballet sought another creative outlet to remain viable. The dancers needed the work. So did Nuñez, who runs the company out of her home in Tampa Palms. She has been a full-time ballet instructor at USF for 12 years, and owns America’s Ballet School in Tampa. Both jobs came to a virtual halt in March.

“Like everybody else, when the lockdown came my routine of work and life changed completely,” Nuñez explains. “I found myself disconnected from the company and I didn’t like it at all.”

To stay active, Nuñez started making video recordings of conversations with her 94-year-old mother, Nemesia Cortez, who lives with her. Cortez suffers from dementia, but has memories of her younger life in Spain. “In the middle of everything, we could still laugh together and make a human connection, find joy,” Nuñez recalls. “That got me inspired to create a film for the company.”

Nuñez came up with the formative idea of tying together the current pandemic with the Spanish flu that ravaged the world in 1918. The narrative centers around the character Teresa, a present-day nurse on the front lines of the battle against Covid-19. She is stricken by the disease and a fever dream transports her back to the 1918 pandemic, which hit Ybor City especially hard. (It’s been said that half of the city’s cigar workers contracted the disease.)

With story in hand, Nuñez called a friend, Natalia Marty, a recent graduate of the Savannah College of Art and Design, to direct and keep the project within the small budget of roughly $18,000. Nuñez collaborated with the company’s lead choreographer, Elsa Valbuena, to transform the story into an uninterrupted flow of dance sequences. 102 Degrees blends elements of classical ballet, modern and contemporary dance, with an emphasis on theatricality and athleticism. 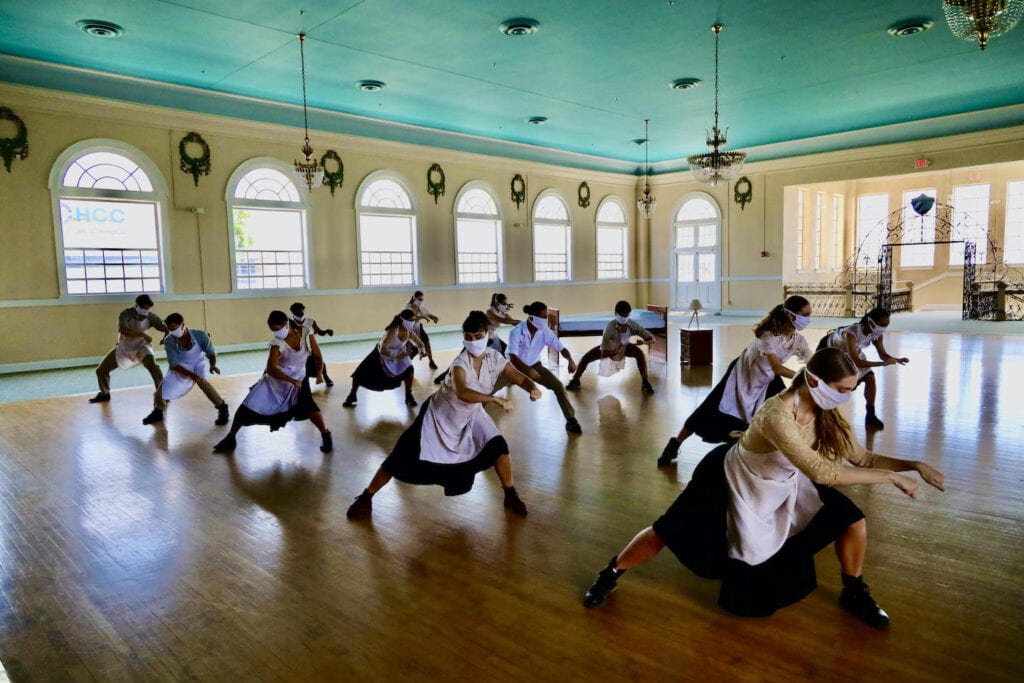 The piece is performed without dialogue. Nuñez recruited composer Paul Eddison Lewis, a USF graduate and native of Dade City, to write an original score and play it on computer.

Then the creative team and dancers set about the hard work of making all the moving parts coalesce into narrative dance work. And they had to do it virtually — via Zoom meetings. That included teaching the dancers their choreographed parts, many which featured the full ensemble, and the early rehearsals.

“You can imagine how hard that was,” Nuñez says. “The choreography was modern and intricate and there wasn’t always a vocabulary to get the points across. We were all little squares on a computer. At times it seemed impossible, but the more experienced dancers would help, and teach the new ones [in side sessions].”

In June, the company held four rehearsals in the parking lot of America’s Ballet School. “There was still a lot of [Covid] anxiety,” Nuñez remembers. “People were still very isolated.” An assistant director, Javier Ruiz, scouted indoor and outdoor locations — the Cuban Club, the Scientology building in Ybor, the parking garage that would turn golden — logged patterns of natural light and set up a shooting schedule.

The filming began on Monday, July 13. And so did the rain. Nuñez recalled that it came down consistently for three of the four days, but given the tight budget — and the fact that the director had come in from Georgia — the shoot could not be postponed. That required the company, which was using the locations for free, to be agile and take quick advantage of times that the rain stopped.

In the end, they didn’t get everything, but they got what they needed. Then came the arduous task of editing, finishing and synching the music, and the rest. The post-production yielded its share of unwelcome surprises — like a modern-era car driving through a 1918 scene, or a dancer’s arm obscuring a key image.

The team originally targeted a runtime of around 16 minutes, but ultimately decided it needed to be shortened to 10. Nuñez is going to shop 102 Degrees to international film festivals for 2021 and that’s a more appropriate length. They trimmed and trimmed, each cut getting progressively harder. Week after week passed. “I came to the realization that I could not be on top of Natalia all the time,” Nuñez says, referring to the director, who was also editing. “I was becoming obsessed. She needed space and I had to 100 percent trust her.” 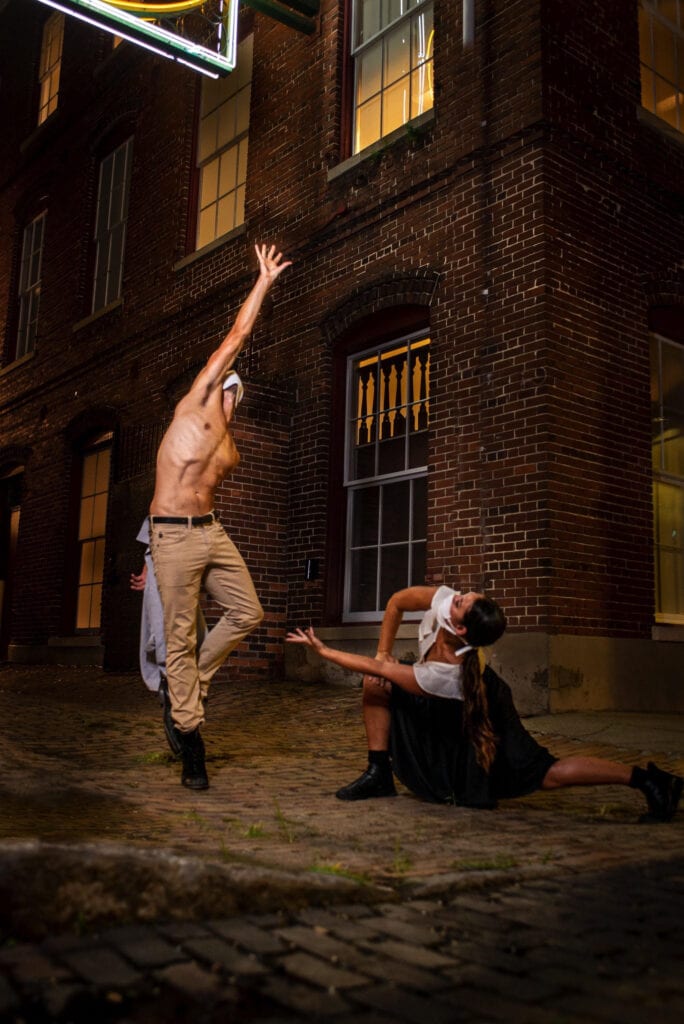 Ruiz, the assistant director on 102 Degrees, took the helm. The troupe shot at the St. Pete Pier on October 3-5. The new film’s working title is Reflections. “This one was more experimental and not as involved,” Nuñez explains. “It centers around the idea of belonging.”

Tampa City Ballet doesn’t intend to submit Reflections to festivals. The company does plan to hold a private screening of both films together in December. They also look forward to mounting a public premiere in 2021, as soon as the pandemic permits.

That the movie even got made is all the more remarkable because in some respects Tampa City Ballet is a fledgling outfit. Nuñez, a native of Venezuela, founded the company as a dance teaching and outreach program. (She says the name, especially the term “Ballet,” has become limiting.) TCB incorporated as a nonprofit in 2012. It was only two years ago that “we decided to get into performance,” she says. “We had these incredible students who were graduating from USF and some of them wanted to stay local.”

Nuñez pines for the day — as we all do — that her company and all the arts can resume something like business as usual. She does not, however, intend to abandon film as a medium for her organization.

“I think 102 Degrees came from an emergency situation: ‘How can we keep [TCB] running and doing what we love?” she explains. “It has become very interesting. I’ve grown to love the challenge of film.

“The big question is what it’s going to be like for the arts, post-Covid. The virus will change things forever, but how is that going to be? The positive thing about film is that we can express dance to so many more people than we would with just live performances.”