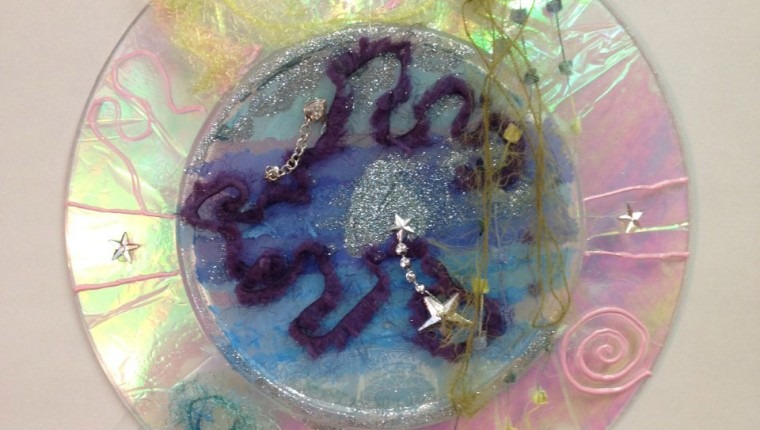 Alexa, Give Us 5 Reasons to See
Marjorie Prime

American Stage’s futuristic drama, in its final run of performances this weekend, provokes both thoughts and emotions.

By Julie Garisto and Daniel Veintimilla

Imagine an app like Alexa or Siri, version point, let’s say, 1000, that provides reproductions of late family members. Playwright Jordan Harrison, a 2015 Pulitzer finalist, has come up with this startling, somewhat disturbing near-future scenario and has crafted a moving sci-fi drama that not only ponders the possibilities that lie ahead, but how much can’t change — such as fundamental truths around love, life and loss.

More “Primes” appear, more secrets come to light but we won’t tell you more. Suffice it to say, each actor gets a chance to shine in Harrison’s extended one-act with no intermission. Also noteworthy, Marjorie Prime is a co-production, the first of its kind, with Capital Stage, the theater Producing Artistic Director Stephanie Gularte co-founded and helmed before taking over at American Stage. Here are five more reasons to see this unique play before it’s gone: 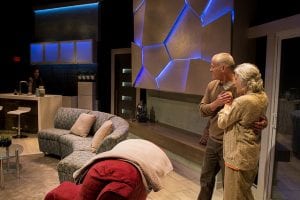 American Stage always grabs us before the play even starts with its elaborate, true-to-life sets — some we wish we lived in. Set Designer/Properties Master Jerid Fox gives us a sleek  home design of the near future with a giant Alexa-like device as the centerpiece … which brings us to our second reason. 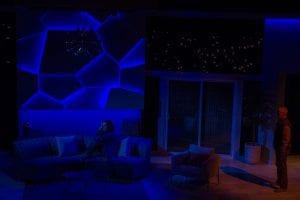 Lighting Designer Chris Baldwin conveys a perfect sci-fi-dystopian atmosphere with colored lights on the device that pulsate when thoughts are processing. The lights and the device add an eerie punctuation to the otherwise typical family discussions. He also creates a breathtaking starscape that washes over the entire set. 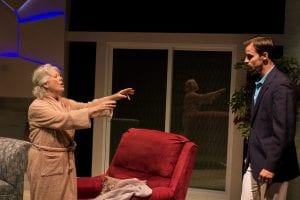 Having experience with caregiving outside our journalistic pursuits, we were both struck by how exquisitely Ms. Stevens captures the physicality of age-related impairment. Vickers is a superb bot with human glitches that make us wonder about the transcendence of the spirit. Garland and Jones poignantly portray the ups and downs of marriage partners, with an extra nod to each for their unique takes on their characters’ personal struggles. 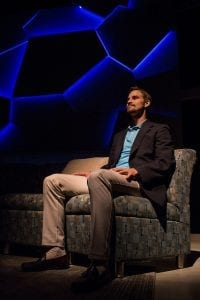 Vickers and the other actors who portray the human-like devices give us a disturbingly believable dead-pan droid face — with credit, of course to Gularte, whose careful guidance once again emphasizes the organic over the hyperbolic — a tougher-than-usual challenge given the sci-fi non-human aspects of Marjorie Prime.  Harrison ponders humanity in the face of potential transhumanism, showing how we’re irreplaceable — for now. He and the performers draw from one of our deepest wells of pathos, the one that overflows with contemplations of our limited lifespan —  our own as well as of our species.

5.) It rivals anything you’re going to watch on Netflix

Marjorie Prime offers honest storytelling and some amusing riffs and what-ifs. As Marjorie recalls a few lines from the Yeah Yeah Yeahs’ “Maps,” we realize we’ve been distracted from the Tomorrowland wonders in front of us by what always works in any century — the humor, pathos and emotional nitty-gritty of a good play.