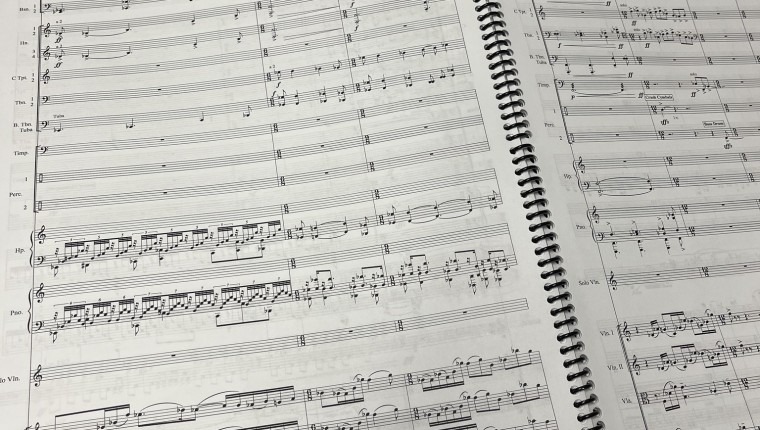 . . .
The Florida Orchestra gives a birth of sorts during its upcoming Masterworks program – a musical child who enters the world on stage right before your ears.

The father is Michael Ippolito, a native of Brandon and a composer we’ve heard every so often through Florida Orchestra commissions. His latest creation: a Violin Concerto, which receives its first performances this weekend under the baton of Music Director Michael Francis. The soloist is concertmaster Jeffrey Multer. The program also includes a rare performance of Elegy by the Irish composer Grace Williams, and Tchaikovsky’s ever-popular Symphony No. 4.

Will it be what Ippolito expected? Will it sound like he imagined during the year-long process of composing it? With each subsequent work he writes, the gap between the perceived and the real narrows.

“As I’ve gotten more experience as a composer, my mind’s ear is pretty close to reality,’’ he says about hearing his music for the first time in concert. “When I was just starting out, there were many surprises when I finally heard my music played by live performers, and I learned an enormous amount from those experiences. I think the process, over many years, is like building a mental catalog of sounds.’’

Ippolito’s catalog is growing. After graduating from Brandon High School, he went on to study at the Juilliard School in New York and the Cincinnati College-Conservatory of Music. Soon, his music was being performed by major orchestras in the United States, winning him prestigious awards from the American Academy of Arts and Letters, Juilliard and ASCAP. Today, he teaches music composition at Texas State University in San Marcos.
. . .

. . .
Orchestra audiences will remember his Triptych to celebrate the 50th anniversary season in 2018, and A la fenestra during the opening of the 2021-22 season. Like those works, the Violin Concerto won’t truly be born until the last note sounds.

“I do think my compositions are incomplete before they have a premiere,’’ he says. “A finished score is just the beginning of a process that’s completed when a piece is performed. In that sense, I like to think of my pieces as spaces for musicians to be able to be expressive, and even spontaneous.

“With the concerto specifically, I’m very curious to know about the balance between the soloist and the orchestra. Since I haven’t written for solo violin and orchestra before, I had to do a lot of score study to find models.’’

Ippolito found a model in Multer, whose talents both as a fiddle player and interpreter will be put to the test. He wrote the work for Multer and his style as a violinist.

“I really like his playing, which I got to know when I worked with the orchestra for Triptych, where he had a short solo,’’ he says. “He made an off-hand remark about me writing a concerto for him and I kept discussing it with him and Francis until we made the project happen.’’

Making things even more special for Ippolito is the fact that Multer plays a violin owned by the composer John Corigliano, which was handed down from Corigliano’s father, the longtime concertmaster of the New York Philharmonic.

“John was my teacher at Juilliard, and so it’s particularly meaningful for me to write for this instrument,’’ he explains. “Anyway, I think it is a nice story, that the violin itself is a character.’’

Ippoliti is a composer who likes stories, and he clothed his new concerto in the historical context of a heroic narrative, with the soloist as the protagonist in an imaginary tale, either collaborating with or battling against the orchestra.

He also immersed himself in ancient Greek epics and mythology, which helped him see a potential path for the music – “To simultaneously embrace epic storytelling,’’ he says, “while also undermining it.’’

Cast in two parts, the concerto opens with Rhapsodos, an epic told from the personal, hero-centered point of view. The second movement, titled Moirai, refers to the fates, the three sister goddesses who determine the destinies of all mortals. The music describes Clotho (who spins the thread of life), Lachesis (who measures each person’s allotment), and Atropos (who cuts the thread at the end of life).